The twelfth numbered entry in the Final Fantasy franchise puts Yasumi Matsuno at the helm, delivering another game set in the fantasy world of Ivalice (formerly seen in the likes of Final Fantasy Tactics and Vagrant Story).  But do his complex characters, unique gameplay elements and elaborate storyline make this a Final Fantasy to remember, or is too much lost from the classics to make this an adventure worth having? 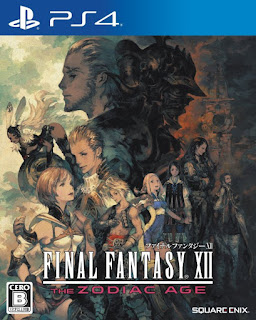 Final Fantasy XII represents a significant departure in style from the earlier Final Fantasy games, feeling more than a bit like an Elder Scrolls title in some ways.  While much emphasis is still put on the game's dungeons and the treasures within them, just as much benefit can be found by exploring the more mundane locales in the game - back-alley shops can occasionally yield rare and useful items, and taking on side-quests like monster hunts or fetch quests can give surprisingly good rewards as well.  A puzzle element frequently comes into play on hunts, with the player having to seek out specific locations and take specific actions to find his mark, which they often won't know unless they converse with various NPCs.  Rather than featuring turn-based combat or even having the Active Time Battle system of many of the more entries in the series, Final Fantasy XII instead took place almost entirely in real-time, with the player freely wandering about the map and seamlessly transitioning into combat whenever enemies drew near.

Compounding this, while the player still has the ability to control individual party members' actions via menus (with the option to either have the gameplay continue or to pause while making choices), combat also has a much more automated element to it.  This comes in the form of the Gambit system, which essentially allows the player to specify a list of conditions and actions to take when they are met for each of their characters.  For example, if an ally's HP drops below 50%, they can then have a character automatically cast Cure to restore their health.  Similarly, one can have characters automatically recast buffers (such as Haste or Shell) when their effects expire, automatically take aim at enemies with specific elemental weaknesses, or concentrate attacks on enemies with the lowest HP in order to get them off the battlefield.  While some have criticized this element of the game for taking much of the active player involvement out of the experience, I think it actually works quite well, allowing the player to breeze through mundane fights while simultaneously forcing them to keep an eye on their progress and change up their strategies when new threats arise; one probably doesn't want to be casting Fire spells on Bomb enemies, for example, and will want to concentrate their attacks on them one at a time to prevent the party from being taken out in a series of explosions.  Thus, the player's role is now less about picking each individual action and instead acting as more of a strategist, having to know when to use their pre-programmed gambits, change them up for a new situation, or take manual control of the party.

Another controversial change to the game comes in the form of the License Board.  Somewhat similar in premise to Final Fantasy X's Sphere Grid, the player earns License Points for taking part in battles, which can then be spent to unlock spaces on the Board in order to unlock new abilities.  These govern almost every aspect of a character - what equipment they can use, what skills and spells they can utilize, and even give bonuses like extra attack damage, faster turns or extra HP.  Unfortunately, some familiar Final Fantasy archetypes like the Blue Mage or the Dragoon make no appearance in the game, though a few of their trademark skills appear on the sphere grid such as 1000 Needles and Telekinesis (allowing melee weapons to reach flying enemies).

An unfortunate limitation of this system is that it lends little to individuality among the cast - all six characters utilize the same sphere grid, and while there is some merit to mixing up weapon types (melee weapons having the ability to combo multiple hits together while ranged attacks hit flying foes), the party's abilities tend to look very similar after a while on the whole.  There is little benefit in some skills by the time they become available (such as the aforementioned 1000 Needles, which tends to come well after one's normal attacks are doing well above that amount), and some of the stranger weapon types like Measures (weak weapons that inflict positive status effects) and Hand-Bombs (elemental mage-style weapons) are little more than novelties of questionable value.  Indeed, I mostly just found myself giving all of my characters White and Green magics so that I could keep my party healed whilst having them use physical attacks for much of the game, only using the occasional Quickening to deal with tougher enemies.

Quickenings serve as the game's "Limit Breaks", and thankfully are not nearly as abusable as in some previous entries of the series.  Rather than operating off of a gauge or just randomly being awarded to the player, they now operate off of Magic Points, taking a third of the bar for each level of the attack (up to 3).  Each of the three active characters can also chain multiple Quickenings together for extra damage and even be randomly awarded "Mist Charges" to lengthen a chain for even more damage, though there is a substantial random element to this - sometimes you'll get a combo of 10+ Quickenings and a Finisher that can deplete a huge chunk of a bosses' HP, sometimes you'll only get three or four and do significantly less damage.  In either case, the player is left at a disadvantage afterward (with one or more characters at 0 MP), ensuring that Quickenings are best used either as a last resort or as a costly bailout measure, forcing them to use valuable Ethers or Elixirs to not leave themselves vulnerable after the fact.  They also become substantially less useful as the game's difficulty ramps up for this reason, as even a large chain of Quickenings can do relatively little to a more powerful boss by the end of the game.

Summons work on a similar principle, taking the player's MP gauge in thirds to call them to the field.  Whilst they are active, the other two characters (ie not the Summoner) are temporarily replaced by the summoned creature, who fights in their place until either being dismissed or losing all of their HP.  However, while their level matches the summoner's, their abilities and "equipment" does not scale up with them, making them significantly more limited in application and usefulness than a normal character.  However, they are immune to most status effects, which makes them useful against some particularly annoying foes (like Malboros).

In short, Final Fantasy XII's gameplay, like most games in the series, is uneven and awkwardly balanced, with some skills proving incredibly useful and others situational or even outright useless.  Similarly, many fights are easy but some are incredibly difficult, requiring the player to utilize unconventional tactics, sometimes bordering on "cheating", to win.  The License Board assists in this as well, with the overwhelming majority of enemies giving the player 1 LP per kill, which in a way encourages the player to revisit lower-leveled areas and stomp weaker enemies in order to build it up and unlock new skills in order to power through a particularly tough boss, which feels just a bit unfair.

But while this is the norm for the series, the storytelling element is at least not.  Yasumi Matsuno's talents shine through once again in Final Fantasy XII, delivering a  dense and complex narrative set in an equally vast game world.  Each locale the player visits feels dynamic and alive - NPCs chatter about current events and wander the town on their own business, conversing with them reveals much in the way of lore and backstory leading up to the game's events, and each and every enemy the player encounters has a lexicon entry detailing their history and traits.  Main characters, antagonists and tertiary ones alike show much in the way of development, questioning their loyalties and what led them to their current plights.  There is even surprising eye for detail in the voiceover, with characters from different regions bearing varying accents.  As per Matsuno's standards, the game feels less like a fairy tale story and much more like a grandiose fantasy epic, telling the story of events past and the complex relationships between all of its major characters, and it's that factor that kept me motivated to play to the end even as the gameplay got less and less balanced.  From a personal standpoint, it was also interesting to see how it flipped the series' norms becoming the "anti Final Fantasy" in many ways.  For example, Cid is a villain rather than a supporting protagonist, the summons one unlocks were the major villains in the Final Fantasy Tactics franchise, and the traditional series summons now lend their names to the Empire's airships, making it feel like the tables have been turned on the player in a strange way.  There are many more elements like this, as well as countless little homages to earlier games in the series, that make it an interesting sight for those accustomed to many of the earlier games' tropes.

In the end, Final Fantasy XII, while it hits many of the series' usual cues, does just as much to change them up as well.  Its gameplay and storytelling remains a bit rough around the edges, but now focuses more on progress and strategy rather than the sheer tedium of mashing and spamming elemental weaknesses.  Its storyline, while hitting a few of the usual tropes, plays heavily to Matsuno's strengths, telling a complex political tale rather than a simple good-versus-evil fantasy story.  Its world now feels very dynamic and alive, challenging the player to not only explore deep dungeons in search of treasure, but to hunt around towns, back-alley shops and the rumor mill in search of rewards.  By drawing elements from both the classic Final Fantasies and the more exploration-based gameplay of western-styled games and MMORPGs, Final Fantasy XII provides an experience that, if you give it a chance, will keep you captivated for a very long time.

Developer: Square Enix
Publisher: Square Enix
Platform: Playstation 2, Playstation 4, PC
Released:  2006, 2007, 2017
Recommended version: The Zodiac Age version of the game (released for Playstation 2 in Japan and Playstation 4 and PC internationally) overhauls many elements of the game, making some items easier or harder to find and making a few side-quests less luck-based (most notably the rather asinine Zodiac Spear quest).  More significantly, the party no longer operates off of a single License Board; instead, each character is allowed to pick one of twelve boards, which they then use for the remainder of the game.  These allow them to better fit into the archetypal Final Fantasy job classes (Red Mage, Machinist, Knight, Monk, etc) and lend more diversity and strategy to the game as a whole.  Quickenings now operate off a more traditional "Limit Bar" that slowly recharges over time, and the game can now be sped up with the L1 button, making level-grinding and mundane monster battles much less tedious to sit through.  All in all, a much more polished and satisfying experience than the original release of FFXII.