After a number of spinoffs and an un-numbered sequel in the Shin Megami Tensei franchise (Strange Journey), IV marked a return to the base franchise, as well as many of its more controversial design elements.  But does Shin Megami Tensei IV prove to be a worthwhile adventure, or is it dragged down by the dated and frustrating elements of its design? 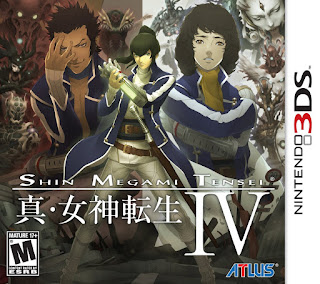 The Shin Megami Tensei franchise has a long and complex history in North America, but arguably its first major success was Nocturne on the Playstation 2, which combined a moody atmosphere with gameplay that retained many familiar elements of the franchise (recruiting demons through dialog and fusing them to create new ones), yet also tried enough new things to set itself apart from its predecessors and give itself a distinct feel and strategy; among these, the player would be able to carry over skills between fused demons and customize their own character with a variety of skills and elemental vulnerabilities/immunities, allowing them to adapt their strategies for upcoming battles.  Following up on that came Digital Devil Saga, which aimed to be more accessible while losing the franchise's most iconic element (recruiting demons), and after that came Personas 3 and 4, which worked elements of a dating/school sim into both the story and the gameplay, with the player's party growing stronger as they built bonds with their classmates.

Strange Journey came out on the DS a few years later, and was something of a return to form for the series.  Returning to the grim, moody atmosphere of 1, 2 and Nocturne and the first-person perspective of the first two games, the gameplay saw much of a return to Nocturne's style, putting heavy emphasis on exploiting elemental weaknesses, haggling contracts with demons and building a party of demons to match the challenges the player would face in an upcoming area (with a limited degree of customization for each one they acquired, based on what skills they had when fused).  It also returned to something that many of the spinoffs had lacked by featuring multiple story paths and endings - depending on one's choices, the story would branch in different ways, making some demon types unavailable, changing up the strategies the player would need to use in order to succeed.

Shin Megami Tensei IV continues in much the same vein, giving the player freedom to pursue different story paths and tailor their party to the specific challenges they will face.  However, some things have been changed.  The game is now viewed from a third person perspective, and similar to the Persona games, one can get surprise attacks by landing a strike on an enemy before they are aware of the player's presence, or be surprise attacked themself if the latter happens.

The Press Turn system from Nocturne is removed, as is the 1 More system from the later Personas.  Instead, successfully hitting an enemy weakness or blocking/nullifying an enemy attack has a chance to put that character into "Smirk" status, which grants them a high evasion and critical chance until the end of their next turn.  While this does allow the player to gain benefit when they are adequately prepare for it, I found it to much more often be a liability - as damage output from enemies tends to be extremely high (enough to kill a character in only 2-3 hits), one missed attack or hit on any of your party's elemental weaknesses can very easily doom your party and send you to the game over screen, which gets annoying very fast.

Said game over screen is a problem in itself, taking nearly a full minute to play out its introduction on your first visit with no way to skip it, and then forcing you to pay an exorbitant amount of Macca (money) to try your previous battle again, with the price only getting higher the more times you end up continuing.  Considering that the game also lets you save at any time (and the high difficulty makes save-scumming all but mandatory), I really have to wonder why they even bothered with this, other than as a callback to the Super Famicom SMT games.

Frustratingly, the game also returns to the grind-heavy aspect of its forebears.  As mentioned, if you're at the "recommended" level for an area, you can easily get blindsided by enemies and taken out in one or two turns (with the "Run" command seemingly only being there to taunt you; I almost never got it to work when I desperately needed it).  Failing a negotiation, having a single elemental weakness out of place or making a single input mistake can very quickly turn the tide against you, which quickly boils the game down to a frustrating affair of experience grinding mixed with tedious save-scumming - neither of which I ever particularly enjoy in a game.  Yes, Shin Megami Tensei is a franchise noted for its difficulty, but when Nocturne and Persona had the option to play on a lower difficulty that greatly toned down the grinding aspect of the franchise and its "latest, greatest" entry does not (not by default, at least - more on that later), it feels like a step backward for the franchise.

Another step backward for the franchise is the player's abilities (termed "Apps" in this game).  Many of these are things which the player was given by default out of the gate in earlier SMT games, or things that would simply be earned over the course of the game.  Character and Demon skill slots must now be purchased one-by-one and manually equipped with a limited number of Points to gain benefit from them, and the only way to gain more skills or points is to complete quests and gain levels.  In effect, this just adds more tedious do-or-die fights and savescumming to the game, drawing out what is already a drawn-out process even further.  Dick move.

But that's all peanuts compared to the ultimate slap-in-the-face change brought to Shin Megami Tensei IV, that being its DLC scheme.  Many of the problems I've mentioned above are addressed here, as things like new quests that provide abundant amounts of XP, App Points and a lower difficulty setting are provided, but deviously all cost more money on top of what you've already paid for the game.  More insultingly, said rewards radically unbalance the game in your favor, allowing you to reach Level 99 in a matter of a few hours so that you can easily breeze through the game.  Either way, you're left with a losing choice - play a slow-paced, grind-heavy and tedious experience, or pay extra money and get left with something that provides virtually no challenge and actively belittles your skills as a player.  Personally, I chose to just stop playing the game, as Atlus should know better than to insult their audience like this (and did only a few years prior, suspiciously in the years before the Sega buyout...).

Shin Megami Tensei IV rolls back not only the earlier themes and storyline of the franchise, but the improvements that came with its later entries and spinoffs as well, returning the series to a grind-heavy, user-hostile experience on the whole.  The fact that they're now pushing paid DLC to "fix" the game, but only breaking it in another way in doing so, only compounds the idea that Sega views this franchise as little more than a cynical cash-grab.  Sadly, the games that have followed it in the years since have yet to dissuade my perception of that idea, either.