The final entry in the classic Phantasy Star franchise, intended from the start to give closure to its storyline that ran for nearly a decade.  But was Phantasy Star IV a worthy conclusion for the series, or is this one tale that should have never been told? 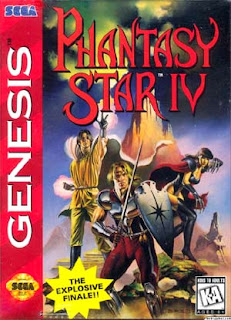 Like many high-profile Sega games of the era, Phantasy Star IV is one with a lengthy history.  It began its life as a Sega CD game subtitled "The Return of Alis" (referencing the heroine of the first game) and it was originally planned that the game would use animated cutscenes in the style of Ys or the Lunar games.  For a time, the game was even intended to return to first person pseudo-3D dungeons in the style of the first Phantasy Star, though fan feedback quickly caused them to abandon that idea.  The Sega CD platform quickly proved unpopular among gamers as well, causing Sega to abandon all work done on the early version of Phantasy Star IV and move development to the Genesis instead.

Some remnants of the early game's design are still evident in the final game, however.  While the Sega Genesis obviously wasn't capable of full-motion video cutscenes, the story is instead told through manga-styled panels alongside the dialog, which lends it a bit more of a cinematic feel compared to many RPGs of the time.  Alis does still "return" as well, though in a much more limited role than the original subtitle would imply - she is mentioned several times throughout as a heroine of the past and makes a small cameo appearance near the end in a non-speaking role.

Sega was clearly not content to have this be a stripped-down version of a more grandiose game either; despite they change in platform, they did much to distinguish Phantasy Star IV from other RPGs of the era.  For a start, Phantasy Star IV's visuals are once again raised to meet the lofty standards of the earlier games; in addition to the aforementioned cutscenes, each combat action from both enemies and allies being fully animated, making it feel much more in-line with the other games than III.  Music in the game is nothing short of spectacular as well, perfectly complementing the game's mood and pushing the Sega Genesis' sound capabilities to their absolute max, seemingly in an effort to rival the grandiose orchestral feel of rival games like Final Fantasy IV.  The end result is easily the most aesthetically pleasing RPG the Sega Genesis has to offer, and one of the few games I still recommend checking out on original hardware whenever possible - virtually every emulator I've seen for the Sega Genesis doesn't get the sound quite right, so playing on those results in missing out on some of the amazing experience Phantasy Star IV has to offer.

The game's writing pays heavy tribute to earlier games in the series as well.  A number of earlier events in the series are referenced (both as cute asides and as part of the main story) and the series long-running antagonist Dark Force is finally given some explanation and context in the grander scheme of things.  Some other mechanics return as well, most notably in the form of vehicles - as in the first Phantasy Star, one has three modes of travel in the Land Rover, the Ice Digger and the Hydrofoil; in addition to allowing transport through areas one cannot cross on foot, they also lend themselves to the game's combat system now, each having their own set of special abilities and enemies to fight, which adds a bit of variety to the game.

Earlier Phantasy Star games were notable for taking steps to acknowledge the repetition and monotony of RPG combat by offering a degree of automation - generally the player just had to click a button and their characters would automatically attack until the fight concluded.  Phantasy Star IV continues in this trend with programmable "Macros", allowing the player to pre-plan turn strategies out of battle and save them in one of ten slots for later use.  But more than that, the game's pacing is generally much quicker; while the game is still turn-based, everything from moving around the map to combat animations to scrolling menus is very fast and smooth.  Even the other Phantasy Star games - which were relatively well paced among most RPGs of their era - feel downright slow in comparison to PSIV, and it's a bit hard to go back to anything older after you've played it for any length of time.

Of course, the combat itself has seen some refinement as well.  While still fairly formulaic attack-spell-item fare seen in many RPGs, there are some new twists as well.  The game retains TP-driven "techs" (which generally function as elemental spells or healing), but also gives each character a complement of Skills, which vary heavily from character to character and have a variety of uses.  Chaz gets powerful melee attacks, for example, Rune gets elemental spells, Kyra and Raja get some powerful healing and support techniques, and the two android characters get a variety of new abilities that they must find modules to install and use.  Some greater variety is given to the cast as well, with playable Motavians and Dezorians for the first time in the series, as well as giving androids some distinct mechanics - unlike their Phantasy Star III counterparts, they no longer cast spells of any kind, and magic is useless for healing them.  Instead, one must use special "repair kits" or their own healing techniques to do that.

Another relatively new idea Phantasy Star IV brought to the table was the ability for characters to combine techniques together into one more powerful ability.  When characters cast certain techs/skills back-to-back, they have a chance to combine their effects together and cause even greater damage.  Several characters can combine elemental techniques together, such as combining a wind and fire or ice spell to hit all enemies on the field, while Chaz and Rune can combine their Crosscut and Efess skills to create "Grand Cross" and hit a single enemy for massive holy-element damage.  This is another area where the game's programmable macros come into play, as it can be tricky to line up characters' turn sequences without it.  Chrono Trigger would later take the idea of combining character spells to new heights, but as far as I know this Phantasy Star IV is the first JRPG to utilize this feature.

The game came out in the era when sidequests were beginning to become a major part of the experience and provide just as much depth and immersion, if not moreso, than the main quest.  Sega clearly took note, as in addition to its main quest, Phantasy Star IV also features a number of subquests to complete, both in the form of optional dungeons off the beaten path (which can grant extra abilities, stronger equipment or just good amounts of experience) and in a more formal capacity. The latter comes in Motavia's Hunter's Guild, where more sidequests become available as the storyline progresses.  These range from mudane (finding someone's lost dog) to more involved monster combat quests to some that are just silly (such as being offered a large reward to find missing persons, only to discover that they've been jailed and the bail cost is just as much as the bounty placed on the job).  In all cases, though, they add an occasional nice diversion from the main storyline as well as some extra rewards.

I've sung this game's praises a lot over the years, but I really can't stress enough how much I love Phantasy Star IV.  Its concise and polished design, fast-paced gameplay, well-crafted storyline and characters all come together to send off a legendary Sega franchise with a bang, and it remains an exceptionally fun title to experience even today.  It may have been largely overlooked at the time because of numerous high-profile RPGs on the PC and Super Nintendo, but Phantasy Star IV is just as worthy of the moniker of "classic" as any of the other lauded greats from that period.  Highly recommended.

Developer: Sega
Publisher: Sega
Platform: Sega Genesis, and several compilations on the Saturn, Playstation 2, Playstation Portable, Playstation 3, Xbox 360, Steam
Released:  1995
Recommended version:  The compilation versions are all ports of the original Genesis game, but as mentioned, I have yet to see one that emulates the game's soundtrack perfectly.  For that reason, I recommend checking out the original release if at all possible.