Xenoblade Chronicles was Monolith Soft's first high-profile RPG release since the days of the Gamecube, and was one of their first IPs to be exclusive to a Nintendo platform.  But did Xenoblade provide a much-needed quality RPG experience for the Wii, or is this title a victim of its own ambition? 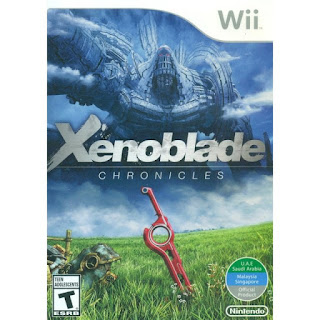 Monolith Soft, founded in 1999, quickly attracted attention for the high profiles of the minds behind its founding.  Tetsuya Takahashi, Hirohide Sugiura and Yasuyuki Honne had all made names for themselves at Squaresoft in the preceding years, working on high-profile games like Final Fantasy VI and VIII, Xenogears and Chrono Cross.  However, they had become frustrated by Square's business model and lack of support for secondary projects, causing them to eventually depart, form their own company, and seek a publisher in Namco (later Namco Bandai).  There, they developed several more titles that went on to achieve acclaim, most notably the Xenosaga trilogy on the Playstation 2.  However, a management change at Namco soon led to friction with them as well, causing them to seek out a new publisher in Nintendo, who bought out 80% of the company's shares, effectively making them into a second-party developer.  What followed were a few lesser-known DS releases (Soma Bringer and Super Robot Taisen OG Saga), and eventually a Wii-exclusive RPG in Xenoblade Chronicles.

The game quickly proved to be unlike any other on the Wii, or most preceding JRPGs for that matter.  Rather than the traditional, relatively slow-paced experience commonly associated with the genre, Xenoblade Chronicles took many cues from western RPGs like Oblivion and Skyrim, putting the player into a vast open world and letting them explore it at their leisure, interacting with NPCs, getting quests and farming items for a variety of means (primarily crafting new equipment).  Combat in the game was no different, with the player seamlessly shifting into a fighting mode as they approached enemies and just as easily shifting back out once the threat was gone.

Xenoblade's combat system itself is very atypical for a JRPG; in fact it seems to take cues from MMORPGs more than anything else.  Taking place in real time and exhuming the usual complement of elemental spells, buffs and debuffs common to the genre, Xenoblade's combat system has a much different approach in its strategy.  Standard attacks are done automatically within Xenoblade's combat system, adding a degree of automation to the battle and leaving the player free to watch the battle and select skills from a character's action menu to counter specific threats.  A major focus of the game's combat is "aggro" - drawing attacks away from one's weaker characters toward more defensive ones.  Simply put, the more damage one does, the more enemies are apt to target them.  Healing one's allies also draws aggro, which puts healing-focused characters at risk.  However, some characters, such as the tank character Dunban, have skills that allow them to draw enemy focus to themselves, where he can then quickly shift into a defensive stance to greatly reduce the damage he takes (at the cost of attacking and mobility).  Shulk has an ability to cut his current aggro level down to a fraction by  making himself momentarily invisible, which plays into this strategy as well - he can draw aggro by doing damage, then quickly shift away and escape once he begins taking too much damage, heal himself, and leap back into the fight.  Also atypically for the genre, skills are also not fueled by "magic points" or any similar mechanic, instead relying on a period of cooldown that can only be recharged over time or by landing normal attacks.

Other elements of the combat system also prove to be quite different from the norm. A major focus of many fights is Toppling enemies to put them in a vulnerable state.  Before that can be done, however, one must first use a skill to put them in Break status - this does nothing on its own, but it does leave the enemy vulnerable to followup status-afflicting skills like Topple.  Only one character has the ability to do both of these things, which leads to necessary teamwork between characters.  Much emphasis is also given to the unique abilities of Shulk's weapon, the Monado.  It effectively serves as a great equalizer, not only in allowing him to do things like negate enemy buffs and deal damage to otherwise invulnerable enemies (notably the recurring villains known as the Mechon), but at times it even allows the player to peer into the future, seeing incoming attacks that could prove disastrous to a character (or even the entire party) and take steps to counteract them.  For example, if a character is being targeted by a larger foe, the other characters present can attempt to Break and then Topple them to negate its attack, or use a Monado ability such as Speed (which grants an 80% evasion chance against all attacks for a brief period) to make the attack miss.

Following up on this, Xenoblade's character archetypes are much less influenced by typical JRPG ones and are actually much more akin to those seen in MMORPGs.  Dunban and Reyn primarily serve as tanks, for example, having relatively high HP and decent attacks, but mostly being focused on absorbing damage in place of characters with their high HP, defense and aggro-drawing abilities.  Shulk, Riki and Melia primarily work as support by buffering allies and inflicting status effects on enemies.  None completely fit into these archetypes, however - Shulk, for example, has healing abilities as well as a few effective attacks mixed into his repertoire, while Riki has odd abilities like putting all enemies in an area (and himself) to sleep, or an attack that cancels all debuffs on a single enemy, but doing extra damage for each one it removes.  Riki also has the odd distinction of having more base HP than any other character (even the party tanks), allowing him to take a few more hits than one might expect. Melia may be the best example of this, however - she summons up to three "elements" at a time to serve as buffers; however, these elements are also used to perform attacks, removing that buffer from the party to damage the enemy.  The player must carefully manage which elements to keep in effect and which ones to attack with, as well as time their usage properly so the party isn't caught without them at an inopportune time.

Other elements of weatern RPGs creep in as well, with character customization governed by skill trees that grant various abilities; some can easily change up the way a character operates (allowing them to equip heavy armor they normally couldn't, for example) while others just give things like extra HP or bonuses to individual skills.  Equipment can be fitted with gems, which are earned by defeating enemies, completing quests or even crafting, with different combinations of characters, base items and heat settings giving a huge variety of different potential outcomes - resisting status effects, giving extra base or maximum damage, and dealing extra damage with back attacks just to name a few.

Xenoblade very much plays to Monolith's strengths in its world design and storytelling, providing a massive amount of lore and NPC interactions to get lost in.  The world the game takes palace in is a unique one as well, as the entirety of the game's "world" is built upon the bodies of two colossal gods whose war came to an abrupt end millennia ago, causing both of them to be stopped in time and allowing life to emerge from their bodies.  Whenever the player moves to a new area, remnants of their great battle are still evident there - sword marks the size of skyscrapers and a severed arm serving as an "island" to name two of the many sights to see.

Of course, such a sprawling and ambitious game has a few shortcomings to its design.  Character AI, while decent for the most part, is lacking in some regards.  The most prominent example of this is probably Melia, who just seems to summon elements and random and then immediately cast them, leaving long gaps where she provides little tangible benefit to the party; when using her, the player will likely want to take direct control so they can use her support abilities to their best benefit.  In trying to make Xenoblade a bit more of an MMO-like feel, the developers may have gone just a touch overboard - each time you get to a new area there are several dozen new quests to complete, with many falling into mundane "kill X number of monster" or "collect X number of item" archetypes that get tedious rather quickly.  The game as a whole feels just a tad too long - while it does its best to provide a lengthy adventure with a lot of different sights to see, the law of diminishing returns still kicks in before long; by the 70th hour or so, I was rather bored of the experience and just rushing through the main storyline to try and get to the end of the game.

Xenoblade Chronicles, like most every high-profile Monolith game, is both aided and hindered by its hugely ambitious designers.  By combining an MMORPG-like combat system, elements of roguelike titles like Diablo in its intricate crafting, skill trees and equipment setups, and of course the strong storytelling, imagination and characters of a good Japanese RPG, there is quite a to see here for both more casual gamers and completionists.  By that same token, sheer volume is a double-edged sword - while the game is engrossingly deep for hardcore gamers, those looking to experience a good story and move on to their next gaming conquest may find themselves getting burned out by the end and reluctant to revisit it anytime soon.  Be ready for a long journey, and don't be afraid to skip some (or even many) of the various side-areas and optional quests on offer, and you'll probably have a better time in the end with Xenoblade.

Developer: Monolith Soft
Publisher: Nintendo
Platform: Wii, *New* Nintendo 3ds, Switch
Released:  2012, 2015, 2020
Recommended version:  Both versions are essentially the same game, though the 3DS port has tacked-on Amiibo and Streetpass support to unlock bonuses in an extra gallery.  It also holds the distinction of being one of the few games that actually requires a *New* model of 3DS to play.  The Switch version runs in HD and has a few quality of life improvements like a quest target tracker, a casual mode for less experienced players and a harder difficulty setting.