The last hurrah of the legendary and influential Looking Glass Studios, as well as arguably the game that put designer Ken Levine and Irrational Games on the forefront of gamers' minds.  But does System Shock 2 still hold its own today, or is this one example of an influential game whose innovations have simply been done better elsewhere? 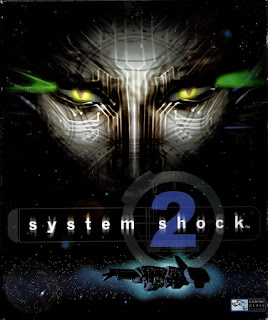 Looking Glass is a legendary studio among PC gamers, having pioneered many trends that would become standard in modern games.  From early '90s 3D engines with complex physics simulations to helping pioneer stealth games with Thief to a more story-driven action experience in general with games like Deus Ex and Ultima Underworld, they were games that encapsulated PC gaming at its best, taking advantage of the added capabilities of the platform to deliver a deeper, more complex and and more cerebral experience that simply wasn't possible on the limitations of console hardware of the time.

System Shock, born from the same engine as the Ultima Underworld games, was definitely a pioneer in its own right.  While it has the initial look of a shooter, there was much more to it as well - the story was revealed in fragments by discovering audio logs throughout the journey, and doors and pathsways were often unlocked not just by finding card keys, but by having to solve puzzles - discerning their locations through clues or even entering cyberspace in order to fight off security programs and make one's way to a virtual "lock" in order to release it.  Of course, it did also have its share of gunplay (with a wide variety of weapons to utilize) but there was a cerebral element to combat as well, with the player able to set a variety of traps through landmines or timed explosives.  It was a game that immersed the player not just for its strong gameplay, but for its surprisingly realistic approach to many design elements and player problems, which earned it a place in the annals of gaming history.

System Shock 2 continued in the trend of highlighting many of the studio's best elements.  While it did away with the cyberspace element entirely, it upped the ante for immersion, putting the player in the shoes of someone aboard a craft overtaken by a bizarre and hostile alien force and having them desperately try to survive against overwhelming odds.

One major element of this was that it now incorporated numerous RPG elements.  This is apparent right off the bat, as the player is given the path of three career choices at the game's beginning.  They can opt to join the Marines (which has a large emphasis on combat skills), the Navy (which puts emphasis on technical skills like hacking and research) or the OSA (psychic black ops, which serves more or less as a "mage" archetype).  Each choice therein has a few variations as well, such as opting to pursue a slightly different stat or skill build at the outset.

Beyond this, however, character development in System Shock 2 is almost entirely free-form.  Once can easily pick the Marine path at the start to get training in heavy weapons, for example, then devote most or all of the cyber modules (essentially experience points) they earn over the course of the game into technical skills, or even psionics.  Indeed, it is rather difficult to play the game as a purely  archetypal character, so mixing up one's skill set to learn a few skills in other disciplines is generally a good idea.

Another element of this comes into play with the game's equipment system.  Weapons are relatively self-explanatory, with heavier weapons like grenade launchers and the bizarre alien weapons one discovers requiring specialized training while a basic pistol only requires a single level in small firearms.  Armor and implants, however, are another story entirely.  Relatively early on, the player can find a powered suit of armor which grants significant protection, but has a battery that they must maintain, either by finding and using recharging stations or simply keeping some batteries on hand in order to recharge it when needed (which can prove problematic when a player is relatively new to the game and does not yet know where to find such things).  Implants are similarly battery-powered, granting bonus statistics or abilities as long as they are equipped and their battery holds out; when it hits zero, the player will lose any benefits those extra stats will afford them, and may be forced to temporarily drop equipment or be unable to complete certain tasks until they are recharged.  One particular oddity is a "worm mind" implant that causes 25% of all damage taken to be subtracted from one's psi points instead of HP; while it has an obvious use for psionic characters, combat-oriented characters who never touch PSI skills can use it as well to reduce the damage they take and give some use to the otherwise useless psi-hypos found frequently around the decks.

There were some hiccups with implementing this style of gameplay, however.  While many of the lower-tier weapons prove useful throughout the game (with a basic pistol having enough ammunition - and varied ammunition types - to prove effective against almost any foe), many of the higher-tier weapons are virtually useless.  The fusion cannon is one example of this; despite the significant investment in Heavy Weapons skills it requires, the large amount of energy it requires for a shot, as well as its disappointingly low damage output, often just leaves players wondering why they bothered with it at all.  Similarly, many of the exotic weapons tend to harm the player more than their enemies, and their extremely limited ammunition makes them amusing novelties at best and a waste of points at worst.  Many of the psionic powers are also rather questionable, with one of the more notorious examples being a power that shortens alert durations for a set period of time (rather pointless when one can instantly stop an alarm by clicking on any security console they encounter).  Indeed, it will likely take some trial and error (or a guide) for many players to discern which abilities are consistently useful and which are best left untouched. with the game generally favoring the ones on the lower end of the point cost scale.

Despite these problems, however, System Shock's strength lies in its design.  While the cyberspace elements of the first game are gone, much emphasis is still placed on utilizing one's skills to reach new areas and bypass obstacles.  Coming up on a turret, for example, a combat-oriented character can simply shoot it until it explodes, while a stealthier character can evade it by hacking a nearby console, or temporarily disable it with a psionic ability, allowing themselves to slip past unharmed.

Aiding this is the strong audio design in the game, which is an absolute master class in quality.  The ambient noise, distinctive enemy sounds and claustrophobic feel of the game's setting coalesce to give the player a constant sense of unease.  In turn, they are constantly urged to move slowly, use cover to their advantage and listen for subtle audio clues to warn them of danger, as even one enemy can be a significant threat to their health, if not kill them outright when they're caught off-guard.  The tension only rises further as the game progresses and the enemies the player encounters only get deadlier and creepier; if body horror makes you squeamish, then System Shock 2 is bound to make you downright uncomfortable in its later stages.

The main storyline is a strong one as well.  As in the first game, it is largely told through recovered audio files and transmissions, immersing the player in the game's oppressive atmosphere as they slowly piece together the horrors of what occurred aboard the Von Braun before their awakening.  Of course, they are also frequently tortured by the voices of the Many, from the horrifying shambling monsters the crew have become to the unsettling, calm voice of the hive mind that constantly berates their actions throughout the game.  As well, no mention of System Shock is complete without mentioning SHODAN herself - the mad artificial intelligence whose discordant voice and hostile, yet calm demeanor leaves the player with a constant sense of dread.  From top to bottom, the voiceover of System Shock 2 is utterly fantastic and lends much to the game's constant feeling of desperation and despair, even by the lofty standards of today's games.

That said, however, even this element is not without some shortcomings.  The game was clearly rushed in its late stages, which is particularly evident in its final chapter - a rather corny throwback to the first game that ends in a fairly braindead shootout with the final bosses, which is a bit of a disappointing turn for a game that, up to that point, has allowed the player to approach problems in a variety of ways.  The game also still utilizes the Thief engine, which provided for large environments with little in the way of performance hiccups, but had the downside of featuring rather ugly, flat textures on most surfaces and NPCs, lending them a somewhat stiff, unrealistic look - while this does aid the horror at times with its exaggerated motions, it just as easily lends itself to moments of unintentional comedy in the same way.

When all is said and done, System Shock 2 excels in spite of its prominent shortcomings.  While its textures and character models are rather ugly by today's standards and its overall balance leaves some things to be desired, its immersive atmosphere, free-form RPG gameplay and a true sense of tension and horror make it a sublime gaming experience.  A great atmosphere and story that still chills me to my core every time I replay it and, in my book, still the finest experience in survival horror to this day.  Bioshock certainly made an attempt to succeed it in tone and themes (and succeeded in some regards), but in my opinion lacks many of the brilliant subtle touches that makes System Shock 2 a standout classic. 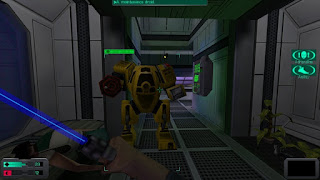 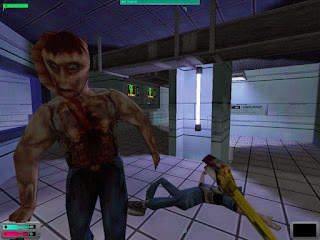 Developer: Irrational Games/Looking Glass Studios
Publisher: Electronic Arts, Nightdive Studios
Platform: PC, OS X, Linux
Released:  1999
Recommended version:  I've only played the Windows version, but from what I gather, all versions of the game are essentially identical.  The Nightdive Studios release is the one to play now, as it features updates to run seamlessly on modern systems and more streamlined mod integration.