Wanderers from Ys, like Zelda II before it, was Falcom's attempt to take an established overhead action-adventure franchise and rework it into something more akin to a 2D sidescrolling action-platformer.  But did their attempt fare as well as Nintendo's, or is this a new style that shouldn't have been tried in the first place? 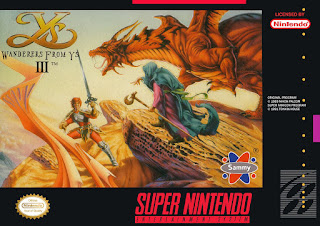 Wanderers from Ys was not only Falcom's first attempt to create an Ys game on 16-bit platforms, but also their first attempt at reworking its gameplay into an entirely new style.  While the first two games in the franchise drew heavy inspiration from Hydlide in their overhead perspective, heavy emphasis on puzzles and combat based on enemy contact, Wanderers seemed to draw much more inspiration from Zelda II, changing the perspective to a side-scrolling one, adding a jump button and a proper attack button to give the game's combat a more active feel.

That would all be well and good were Wanderers as well-polished as Zelda II was, but sadly that was not really the case.  Combat in the game overall feels very loose and unrefined, with no after-hit invincibility for either the player or his enemies.  For much of of the game, and especially its early stages, much of the combat in the game boils down to the player swinging wildly at any approaching enemy, hoping they land enough hits to kill them before they make contact and drain a huge portion of the player's life.  This does get frustrating rather quickly, as if the player ventures just a tad too far into a dungeon or mistimes a single attack, they can easily go from full health to dead in the blink of an eye.  The experience quickly boils down to a show of extreme diligence as the player must always get the first strike on an enemy whilst being extremely careful not to overstep their bounds and engage an enemy they can't easily kill.

However, even this won't always save them, as there are frequent times where they must take a blind drop to reach a lower area, or immediately get attacked by an enemy after going up some stairs or through a door to transition through a new screen, giving them no chance to react ahead of time; in these situations, taking at least some damage is nearly unavoidable.  Boss encounters are equally unbalanced, able to wipe out the player in mere moments through contact damage or with a single barrage of projectiles hitting multiple times and draining all of the player's health in under a second, and the player may not even be able to damage them in any significant capacity without reaching a certain level of power before entering their chamber.

With all of these factors, the game as a whole is seemingly built around savescumming, having the player kill a few enemies, save their progress and move on to the next screen, trying to gradually power themselves up in order to overcome the next challenge.  Enemies tend to only give a pittance in experience and money as well, which turns Wanderers into an overly frustrating experience, particularly in its early hours.  This does ease up somewhat after the first hour or so, but by the end is back in full effect, with enemies that take massive numbers of hits to defeat even with a maxed out level and the best equipment available, and bosses that can easily drain large portions of the player's health in moments.  Simply put, the game is both too easy and too hard in the worst ways possible, with it feeling far less like a contest of skill and problem-solving and more like a gauntlet of farming mixed with tedious trial-and-error.

In spite of its rough gameplay, though, the usual Ys trademarks shine through here.  The game is very well-paced in terms of player progression, with items being appropriately priced-out to prevent the player from buying them early and gaining an unfair advantage, and leveling and gold-farming, while somewhat slow due to overly low payout for much of the game, never feels like an insurmountable task.  As per Falcom's standards, the visuals and music in the game are also fantastic, taking advantage of the platform's capabilities to deliver some very nicely-detailed backgrounds (with impressive parallax scrolling in some areas, giving an excellent sense of depth to the backdrops) and some stellar musical tracks that rank among the finest seen in the RPG genre.

To many series fans, Wanderers from Ys is something of a black sheep for the franchise.  While it attempted to change up the gameplay to that of a sidescrolling platformer, the design limitations intrinsic to that format (with every path in a dungeon either leading forward or to a dead end with a treasure chest) and the overall unbalanced combat in the game made it into an experience that is much more frustrating than fun.  It's not a terrible first attempt at a 2D action-sidescroller, but stacked up against the high standards of the rest of the series, it leaves much to be desired.   Even the series' high benchmarks for visuals, music and storytelling couldn't prevent Wanderers from being heavily maligned by franchise fans and casual gamers alike, though I still had some fun with it at least. 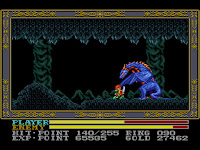 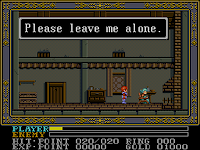 Developer: Nihon Falcom, Advance Communication, Alfa System, Riot, Taito
Publisher: Nihon Falcom, Renovation Products, Victor Musical Industries, American Sammy, NEC Technologies, Taito
Platform: Famicom, Super Nintendo, Sega Genesis, TurboGrafx CD, Playstation 2
Released: 1989, 1991, 2005
Recommended version: Each version has some minute differences that distinguish them from the rest, but the definitive version of the game is generally considered to be the Turbografx-CD version, which features additional cutscenes, CD-quality music and tighter controls than most.  The Playstation 2 remake of rebuilds the game entirely into a much more smooth and polished one in addition to updating the visuals and music, though it is only available in Japanese. Of course, those looking for a much less frustrating experience overall should probably just skip Wanderers and check out its modern remake, Oath in Felghana, instead.
Labels: ⭐⭐, 1991, Full Reviews
Newer Post Older Post Home