The game that put the Elder Scrolls franchise on the map and turned Bethesda into a major player in the gaming industry, as well as helping to redefine the entire RPG genre into something much more grandiose in scale.  But does Morrowind still hold up today, or is this an interesting piece of history that should remain in the past? 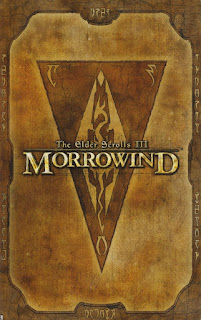 It's a bit hard to believe given the current gaming landscape, but Bethesda's Elder Scrolls franchise was actually rather unpopular in its earliest days.  While critics praised Arena for attempting to create a sprawling virtual world in a game engine similar to the Ultima Underworld franchise, its procedurally-generated environment, high system requirements and overall bugginess made its gameplay difficult to enjoy, which led to a mixed reception overall.  Still, its ambitious and open-ended design let it build a cult following that led to slow but steady sales, and Bethesda was eventually convinced to release a sequel two years later.  Daggerfall upped the ante even further, moving the game to a true 3D engine and giving the player guilds to join, the ability to build their own spells and enchant their own items, the option to become a werewolf, wereboar or vampire, and even simulated a virtual economy and law system.  However, much of the game was still randomly generated and it managed to be even buggier and more system-intensive than the original title, leading its developers to eventually release some of their development tools publicly so that players could attempt to fix it themselves.  Nevertheless, Daggerfall won over many gamers for its sheer scale as well as its open-ended design that encouraged character roleplaying (including six different possible endings to attain), and it attained great critical success for these factors as well.

Morrowind, the third numbered game in the franchise, followed six years later and drastically changed up the series' format.  Rather than giving the player free reign of the whole continent of Tamriel, the action was now restricted to a much smaller geographic area in the island of Vvardenfell.  The game no longer featured procedurally-generated towns, dungeons, quests or terrain, trading them in for a fixed game world populated by NPCs with scripted dialog and quests.  While this change did attract some criticism from long-time fans, both newcomers and veterans soon saw the benefits of this new style, being treated to a world full of unique sights and sounds that added much to the appeal of roaming the landscape and exploring its every facet instead of just skipping over everything with fast travel.  This was only further compounded by Vvardenfell's design - a strange, hostile and yet oddly beautiful environment filled with towering mushrooms, flying invertebrates, giant insects used for a variety of purposes (most prominently traveling from city to city), countless ruins and tombs to explore, and a dense history and lore told through NPC interactions and dozens of books that can easily stretch on for a dozen or more pages.  All of this was accompanied by an excellent soundtrack composed by Jeremy Soule, which only adds to the feel of the player being on a grand adventure with its overall uplifting feel and sense of intrigue.

But while the game's explorable boundaries have been greatly scaled down in size, Elder Scrolls retains its core appeal in that it is essentially a free-roaming role playing experience.  The player is given plenty of options to customize their character, with ten races to choose from, ten birthsigns to choose (which each grant either bonus stats or extra abilities) and a number of premade classes in addition to letting them create custom classes by picking  skills from a list.  Daggerfall's tradition also continues in that the player can only gain levels by using skills that pertain to their chosen class (a fighter, for example, can't level up by casting Illusion spells); however, boosing minor skills can allow them to earn greater stat gains when it comes time to level up.  The player can buy or find premade spells, potions and enchanted weapons, or if their skill level is high enough, even create their own.  There are countless quests to explore in the game and numerous factions to join, some of which even skirt the bounds of the law like the Thieves' Guild and the Morag Tong (government-sanctioned assassins).  One can even become a vampire or (in the Bloodmoon expansion) a werewolf in order to put a new spin on the game, though both of these carry substantial drawbacks as well, making them more of a novelty or an avenue of challenge than anything else.

While efforts have definitely been made to make Morrowind a more immersive and realistic place, there are still some things lacking in the game that were present in earlier RPGs like Ultima.  Most NPCs don't abide by any real schedule according to their occupation or the time of day, mostly just standing in place or being restrained to a small area to roam about aimlessly.  Many NPCs serve no real interesting purpose, either just repeating canned lines in response to player queries or even having nothing at all to say when spoken to.  Creature AI is disappointingly simple for the most part, simply having them stay in a small area until the player wanders in close enough for them to notice, at which point they immediately run to them and attack.  Combat as a whole in the game is also rather underwhelming, often consisting of little more than holding and releasing the attack button (or firing off a spell) and rolling the dice with each swing/spell until your target dies.  While one does still have the ability to swing, thrust or bash with any weapon as in the earlier Elder Scrolls titles, there is an option that simply enables the player to always use their particular weapon's strongest attack, rendering it rather pointless.  Voiceover in the game, while of decent quality, is relatively limited, with only a few plot-relevant characters having distinct dialog and most NPCs being limited to a handful of canned lines corresponding to their race and gender.

Another element present in earlier Elder Scrolls games but oddly absent here is freeform fast-travel.  In Arena and Daggerfall, one could travel to any location on the map by either clicking it's icon, or, in Daggerfall's case, typing in part of its name on the map screen and pointing the player toward the nearest match.  Morrowind's fast travel is considerably more limited, having the player travel by boat, Silt Strider or teleporting between Mage's Guilds, all of which only take them to a small handful of fixed locations (which vary by your current location - one can only travel to relatively close-by towns).  While this does arguably get the player more immersed in the environment, it can lead to frustration as they may have to travel through areas filled with dangerous enemies and low draw distance for a fairly long period before they discover their destination.  This was also before the ever-controversial objective markers became the norm in open-world games, so finding an area tucked between two large mountains or a switch needed to enter a Dwemer ruin can quickly lead to frustration as well.  Moreso because moving at a decent clip requires one to deplete their Fatigue meter, and when it is low, all of their skill and attack rolls suffer as well.

Finally, and as most people who have played the game eventually figure out, its overall balance leaves much to be desired.  There are methods in the game by which one can quickly earn thousands upon thousands of gold pieces with only a few minutes of work, which they can then turn around and spend on training with one of the game's many NPCs who offer it, maxing out their skills and levels in mere minutes while doing so manually could take many, many hours.  One can also boost their stats to absurd levels through clever use of alchemy, brewing potions that last for days of game time and grant thousands of points in Strength, Luck or whatever stat they may wish to boost (in a game where the normal statistic maximum is 100).  One can even give themselves a 100% Chameleon effect through clever armor enchantments and effectively make themselves untouchable, as no NPC will even attempt to attack a target they cannot see.  While it can be amusing to see just how far the game can be pushed in this direction, it does considerably dampen the immersion factor that Elder Scrolls seems to pride itself on.

Regardless of its faults, however, Elder Scrolls was a monumental step forward for both the franchise and for CRPGs on the whole.  It's amazingly realized world, intriguing storyline and dense lore set a new standard for the genre, and for many console players whose genre exposure was primarily limited to the more linear, anime-esque fare of Japanese RPGs, it was a very drastic change of pace.  While it may not be the best-balanced experience or have the same gameplay hook as its sequels (or arguably even its prequels), its immersive narrative design and sense of freedom ensure Morrowind is nevertheless a game of interest for any serious genre fan. 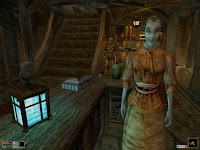 Developer: Bethesda Game Studios
Publisher: Bethesda Softworks
Platform: PC, XBox
Released: 2002
Recommended version: Both versions of the game are essentially the same (being developed concurrently and released a month apart), though the PC version gets the benefits of its platform by allowing players to create custom mods for all manner of tweaks and additional content through the use of the included Elder Scrolls Construction Set.  This allows for all sorts of balance tweaks as well as new features like more convenient fast travel, magic regeneration and entirely new questlines, weapons, enemies and so forth, so it is definitely the version to play these days.  A fan-created executable called "OpenMW" also makes it run flawlessly under modern operating systems and further expands what it will be capable of (with multiplayer co-op in an experimental state), so keep an eye on that too.
Labels: ⭐⭐⭐, 🎣, 🎵, 2003, Full Reviews
Newer Post Older Post Home