The second attempt at an RPG by little-known company Sacnoth, released in the early days of the Playstation 2 to relatively little fanfare.  But is there anything of interest here for JRPG fans, or is this one franchise that should be left in the past? 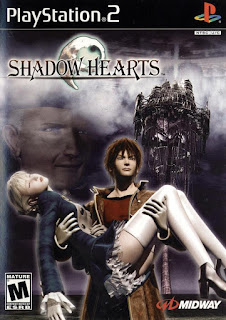 Sacnoth is a fairly obscure company to many despite having a relatively big name attached to it; Hiroki Kakuta, composer for Secret of Mana and Seiken Densetsu 3, was one of the company's founders and helped to write, compose and design their first mainstream game with funding from SNK.  The end result was Koudelka, a game which, while praised for its high-quality cutscenes, drew much criticism for its poor balance, clumsy combat system and unimpressive music (particularly given Kakuta's previous works).  This, paired with internal strife over the game's direction and SNK's financial troubles putting the company's future in doubt, caused Kakuta to depart the company shortly after Koudelka's release.

SNK's IPs were shortly thereafter bought out by Aruze (mostly known for creating pachinko/slot machines) and Sacnoth (later renamed Nautlius) was allowed to continue developing games.  Their best-known work was the Shadow Hearts franchise, which more or less served as a followup to Koudelka with its dark themes and a unique setting of an early 1900s Earth where magic, demons and monsters were the norm.  Its cast of characters was equally colorful, working several real-life events and people into its stories (though obviously in a fictionalized form) while also utilizing elements popularized in many early PS1 RPGs, such as minigame-driven action and prerendered CGI backgrounds for dungeons.

Shadow Hearts' most defining element is its "Judgement Ring", which factors heavily into almost every aspect of the game and serves as its overarching risk-versus-reward mechanic.  Essentially it's a timing-based minigame, tasking the player to watch indicator sweeps around the ring and time a press of the X button when it lines up with colored areas on it.  In combat, everything from basic attacks to using items utilizes this, though in slightly different ways.  Status-curing items often simply require a press on a single lit area, while items and normal attacks can get a slight bonus to their effects by timing the button press to a narrow red sliver at the edge of a hit area.  Normal attacks can hit up to three times (with each hit zone having a red zone for bonus damage); special moves, on the other hand, often have several areas to hit - one or more green areas before the attack zone, then a hit zone to actually carry it out.  There are even a few instances of the Judgement Ring appearing outside of combat, such as having to open a lock or search an area, find an item, or play the "lottery" for a chance to win rare and powerful items (though one must also find relatively scarce Lottery Tickets for the chance to do that).

Further following up on this, there are several enemy status effects that can affect the ring, such as making it sweep faster, making the indicator invisible, or shrinking the ring to make it harder to see and time one's button presses.  However, the player can utilize this to their advantage, with accessories that affect it in various ways.  A few of these include making the indicator invisible, but doubling that character's attack damage, giving them a massive speed boost at the cost of making the indicator sweep twice as fast, or a plethora of items that can allow the indicator to sweep around the ring multiple times per turn, effectively allowing them three or even five attack sets in one round.  While all of these carry substantial risk (as one miss will cause the whole attack string to abort per usual), they can be absolutely devastating when used well.  One can also make slight tweaks to their weapons through "acupuncture" in order to slightly expand the hit area on their character's attacks or do slightly more damage at the cost of making the hit areas slightly smaller, but as this tends to be very expensive it's generally best saved for near the end of the game, when the ultimate weapons start to become available and money is much less of a concern.

Another unique element of the game is the Sanity meter.  Each character has a set amount of "Sanity", and over the course of battles, it will deplete at the rate of one point per turn.  Once it reaches zero, the character will go "berserk" and will begin randomly attacking allies and enemies alike each turn until their sanity is restored or the fight ends.  While not as big of a factor as the Judgement Ring (as fights can generally be ended long before it ever becomes a problem), it can be a concern during boss fights, particularly with characters who have a very low amount to start.  It can also be factored into the game's risk-versus-reward elements, with things like an accessory that give a substantial stat bonus but cause Sanity to deplete twice as fast, or enemies that can forcibly deplete a character's sanity, putting the player at greater risk of losing control over them.

The characters in the game , while they have distinct personalities and some rather humorous dialog most of the game, are sadly rather generic on a gameplay front.  For the most part, they're generally themed around a single element and fill a single niche within the party (the healer, magic user, fighter, etc) with little opportunity to expand beyond that role.  Probably the most amusing of these is Margarete, a a fictionalized version of Mata Hari who utilizes gadgets like grenades, bazookas and airstrikes (all called in with a cellular phone) to do battle.

By far the most versatile character of the bunch is the main character, Yuri.  His defining feature is his power as a Harmonixer, which allows him to transform into various demons to do battle, each with their own elemental affinities and skill sets.  New forms are unlocked via defeating enemies to earn points toward one of the six elements (fire, water, wind, earth, light and darkness) and then traveling to the "Graveyard" via any save point and defeating a demon in battle once they have enough; once that demon is defeated, Yuri can then morph into it and use its skills himself.  However, this does comes at a price - defeated enemies will slowly cause the Malice gauge to build, and when it is full, random encounters may occasionally be replaced by a fight against a rather difficult miniboss.  In order to prevent this happening, the player must make occasional trips to the Graveyard and fight a phantom enemy in order to dispel the malice temporarily.

Fittingly for a survival horror inspired title, Shadow Hearts basks in its dark themes and imagery.  Themes of wicked sorcery and supernatural evil are prevalent throughout and some of the enemy designs are grotesque and downright bizarre; dogs with zombified arms emerging from their mouths, zombies, ghosts and demonic entities of many denominations to name just a few.  Areas in the game are equally grotesque and unsettling, with the first playable segment of the game famously being a train with nearly everyone on board having been messily slain by the game's villain and the player's adventures leading them to places like a village of cannibals and an abandoned mental asylum used for dark experiments.  Some of the puzzles are seemingly a nod to this as well, with the player having to find various themed keys and clues that read like something from a Resident Evil game.  This is all accompanied by moody soundtrack that complements the unsettling nature of the settings while lending a distinct feel to each of the game's environments.

But while the game certainly looks good and sounds amazing (in no small part due to the contributions of Yasunori Mitsuda and Yoshitaka Hirota), it does show some trouble with what was a relatively new element of gaming at the time: voiceover.  While Midway did go to the trouble of getting professional actors for the roles, there are overall relatively few voiced scenes in the game (and the few that are tend to come across as underdirected and campy).  There is some noticeable corner-cutting in the combat aspect of the game as well, with characters frequently jumping back and forth between Japanese and English voice tracks during their special moves (particularly Margarete, whose English and Japanse voices are often heard seconds apart within the same special attack animation).  It's certainly not a deal-breaker, but given the high production values of the rest of the game, it is a bit jarring to hear at times.

Shadow Hearts also suffers from a few dated design elements; random encounters are still prevalent throughout (though thankfully are on a relatively long timer, particularly compared to other contemporary RPGs) and some combat animations tend to drag on, particularly later in the game.  There is some lackluster balance at times, with some bosses being almost laughably easy and others requiring either very specific strategies to defeat or simply brute-force grinding.  Character balance leaves much to be desired as well, with some characters being overwhelmingly powerful and others being far more limited and virtually useless.  There are some easily missed plot flags as well, with the player able to miss out on at least one ultimate weapon and even the good ending because of easily-overlooked, innocuous things such as not examining a gravestone or talking to a specific NPC (with no indication, dialog or otherwise, that these things are critical to achieving these elements).  Characters do not gain any form of experience when they are not a part of the active party either, which can result in some (particularly Yuri) being many levels ahead of the rest by the end of the game.

Despite a few small faults, however, Shadow Hearts is a very competent game.  Its risk-versus-reward centered gameplay, eerie atmosphere and colorful cast of characters make it an engaging title to play, and its unique urban fantasy setting certainly makes it interesting from a storytelling and visual perspective.  It isn't a perfect experience by any means, but it is worth a look as a decent alternative to the big name RPGs of the era.