One of the earliest examples of the action-RPG genre, as well as one of the first Japanese RPGs to get a western release as well as numerous ports and remakes.  But does the first entry in Falcom's flagship franchise still hold up today, or is this just a piece of history that should remain such? 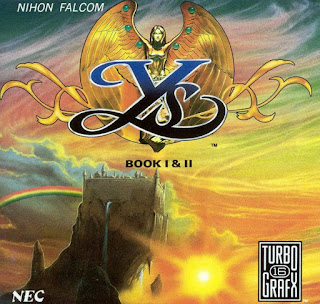 Falcom's flagship Ys franchise has always been a bit of an unsung hero in the RPG genre.  If nothing else, one certainly wouldn't expect a franchise whose gameplay drew inspiration from Hydlide (a heavily-maligned RPG in the west) and whose games have always been built on a relatively low-budget to endure as long as it has; as of the time of this writing, the franchise has endured for over thirty years and spawned enough sequels, remakes and spinoffs to rival the biggest names in the genre.  It even marches on to this day, with Ys VIII: Lacrimosa of Dana due for release in September across multiple platforms.

Despite its longevity, however, Ys has never attained nearly the same level of success as many other big names.  At first, this can be attributed to it only getting a series of relatively low-key releases; its first game only saw a western release on the Sega Master System, then as part of the two-game compilation "Ys: Books 1 and 2" on the Turbografx-CD.  Finally, after the unpopular Wanderers From Ys, the third game in the series released on both SNES and Sega Genesis, the franchise fell into dormancy in the west for over a decade, making a return with yet another low-key release on the Playstation 2 and PSP in Ys VI: The Ark of Napishtim.  It was only a few years later that a string of remakes and sequels released on the PSP, Vita and Steam finally allowed it to gain a small foothold in the west.

However, despite many of the later games taking on more traditional RPG elements (such as a party system) and even drawing design philosophy from Zelda and Metroid by giving the player new items, allowing them to reach previously inaccessible areas they could only glance at before, the first two Ys games and their remakes have remained relatively constant in their design, retaining the touch-based combat of Hydlide and being relatively short and linear overall.

Yes, one of Hydlide's most hated elements - its combat engine, based on making contact with an enemy and hoping the dice roll in your favor - is also on display in Ys.  Thankfully, they have at least taken efforts to make it slightly less annoying.  As in Hydlide's version, one can heavily tilt the odds in their favor by attacking from specific angles; rather than coming at the enemy head-on, one generally achieves much better results by making contact with the enemy from the side or from behind.  Some of the later remakes add in the capability for diagonal movement, which makes things easier as well - attacking the enemy from an odd angle makes it much more difficult for them to immediately hit back, basing the game's combat around finding a favorable angle to strike from.

Boss fights, on the other hand, change this up considerably.  While they are still damaged with direct contact, the problem is not the angle at which you approach them, but rather weaving between their waves of projectiles to get in close enough to do so.  This tends to get progressively harder as the game goes on, with the final few fights almost resembling something from a bullet hell shooter at times.  This eventually culminates in a particularly fiendish final boss that will destroy the floor beneath you each time he takes a hit.  If you fall down a pit he creates, it's an immediate death, and if he destroys too much of the floor, he can easily box you in and pelt you to death with his projectiles while you're unable to hit him.  It's a rather nightmarish experience, especially on the higher difficulty levels.

Ys was ahead of its time in some other ways as well, requiring the player to analyze clues given to them by various NPCs in the game and carefully read item descriptions in order to solve puzzles at several points.  There are even some rudimentary sidequests in the game, such as returning a missing ring, that grant the player both extra money and even some experience points, making the experience slightly akin to a tabletop RPG that puts much more emphasis on solving problems than sheer combat (though only slightly, as the latter will still account for the vast majority of the player's gains).  There is also a relative minimum of level/money grinding in the game; the player's experience level maxes out at ten, and they're likely to reach that in relatively short order over the course of the adventure, and equipment upgrades are appropriately priced out to lend a smooth flow to the game as a whole.

Another consistent feature of Ys 1's many rereleases and remakes, and indeed almost every game in the series, is its fantastic soundtrack.  Composed by gaming music legend Yuzo Koshiro, every song in the game is very distinct and memorable, whether the low-key, relaxing atmospheric tracks of the towns or the intense, hard-driving themes of the boss battles.  For an era in which game music was still in relative infancy, Ys was arguably one of the pioneers of pushing it into something more akin to a television or movie-like experience.  It may also be one of the first instances of a "power metal" sound in gaming, which was no mean feat for the limited technology of the 1980s and early '90s.

All in all, Ys remains a very distinct and enjoyable RPG experience, serving as an important piece of history as well as just an enjoyable action-driven experience on its own.  While it does have some annoying aspects in its uneven difficulty (with some fiendishly difficult boss fights) and occasional unclear objectives, it's a short enough that it doesn't wear out its welcome or force the player into feeling hopelessly lost.  Any fan of the genre definitely owes themselves to check it out in at least some form.

(Screenshots from TGCD version of the game)

Developer: Nihon Falcom
Publisher: Nihon Falcom
Platform: Sega Master System, Famicom, Turbografx-CD, PC-8801, X1, PC-9801, FM-7/77, FM-77AV, MSX2, X68000, Nintendo DS, Playstation Portable, Wii Virtual Console, PC
Released: 1987, 1988, 1989, 2008, 2009, 2011, 2013, 2015
Recommended version: While all versions are the same game at their core, the later ports to the PSP and Steam (under the title of Ys Chronicles) are arguably the definitive ones, adding in numerous graphical enhancements, high-quality music and more polished analog movement to the experience.  The DS version makes substantial gameplay changes, such as utilizing an attack button setup rather than the touch combat of the other versions, and is disliked by some purists as a result.