On a platform that became famous for having games that delved into dark themes and used its media-streaming technology to effectively convey horror through video and high-quality sound, Square throws their hat into the ring with an Action-RPG inspired by games like Resident Evil.  But does this title manage to provide some fun of its own, or is this combination just too unwieldy for its own good? 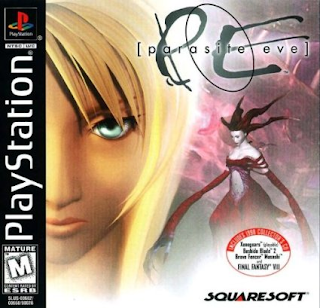 Resident Evil was arguably the Playstation's most important game, kickstarting the trend of "survival horror" games which gave the player a very limited supply of resources as they attempted to solve puzzles, defeat boss monsters and make their way to safety.  This, paired with a creepy atmosphere made possible by the video and audio-streaming technologies of the Playstation, truly made the player feel as though they were trapped in a bizarre horror movie, staying alive only by the grace of quick thinking, avoiding danger whenever possible rather than trying to take it head-on and always being fearful of what dangers would come for them next.  Even with its cheesy acting, unwieldy inventory system and awkward "tank controls", it proved to be a massive success and helped steer gaming into a new era, spawning numerous copycats, spinoffs and eventually becoming Capcom's highest-selling franchise, as well as one of the best-selling video game IPs of all time.

Naturally, with a hit that big on the public consciousness, there would be many copycats of varying quality.  Square threw their own hat in with Parasite Eve, which they touted as a "cinematic RPG" that would combine elements of horror, science fiction and action into one title, as well as provide a movie-like experience with the high quality CGI that brought them fame with their earlier hit on the platform, Final Fantasy VII.  It also drew some clout by being the sequel to a well-received horror novel of the same name, continuing its themes of body horror with a supernatural bent (though the original story would be relatively unknown in the west until it was translated several years later).

The survival horror influence in Parasite Eve's design is clear from the start, with the player moving about on prerendered backgrounds, scavenging a limited supply of items from chests and locations in the environment, and having to solve the occasional puzzle in order to proceed, such as hunting for keys or finding fuses to repair a fuse box.  Of course, there are also segments that fall into predictable video game cliches, such as the similar-looking sewer maze and the story getting increasingly silly and implausible as it goes until by the end it resembles a kaiju movie much more than a survival horror title.

The overall gameplay, however, bears only a moderate resemblance to the survival horror genre.  While this is evident in the exploration aspect of the game (lacking the iconic "Tank controls" that dominated the genre), it's much more prominent in the combat system.  As in most Japanese RPGs, the game often breaks away from player wandering to take them into a combat phase with its own set of mechanics.  Parasite Eve's combat operates somewhat like a Final Fantasy game, with the player getting turns each time an "active time bar" fills up, allowing them to take a shot at an enemy with their weapon, use an item or cast one of several "Parasite Energy" spells with varying effects.  Between turns, however, the player has free movement around the field, which is important as it allows them to move about and evade enemy attacks.  These can even unfold a bit like a shoot-em-up game at times, as the player has to carefully  move their position between two enemy laser beams or position themselves behind an enemy to avoid a sweeping attack, for example.  Thus, the overall game is less about survival and much more action-driven than most games of this kind (at least until games like Resident Evil 4 became the norm).

Parasite Eve's combat finds a decent middle ground between the scripted fights of Chrono Trigger and the random battles of most RPGs of the era.  Battles occur on set screens, though the enemies within them are somewhat randomized, and another fight will not occur until the player leaves that screen and returns, giving them a bit of reign to freely explore the area and search for items.

Of course, being a Square RPG, the game puts heavy emphasis on character and equipment customization.  There are various types of weapons and armor found throughout the game, each with slightly different effects.  Pistols, for example, have decent power and ammunition capacity, but overall poor range, while rifles have longer range but much slower firing time and grenade launchers, while rather slow and only average in terms of damage, have additional effects like having a burn or freeze effect, making the more effective against certain types of enemies (and less so against others).  Armor similarly comes in multiple varieties, which have effects like "pockets" (giving the player extra inventory space), granting resistance to status effects or giving a bonus to one's maximum Parasite Energy when equipped.  Each of these can also be augmented with upgrade items one finds throughout the game - weapons get bonuses to damage, range or ammo capacity while armor gets extra defense, PE bonuses and resistance to critical hits.

The customization aspect comes in the fact that one can remove these properties from weapons and armor and snap them onto others via the use of Tools.  So if you find a new piece of armor with an effect you like but aren't impressed by its stats, you can take that ability off of that armor and attach it to your current one, effectively getting the benefits of both.  Leveling up earns the player "bonus points" that they can spend to further upgrade weapons, giving them a single point in a category of their choice at the cost of 100 points. The tradeoff to this is that when properties or bonus points are removed from a piece of equipment with a Tool, that gear is destroyed; thus, a significant part of the game's strategy is figuring out which pieces of gear are worth keeping in the long run and which ones should eventually be scrapped in favor of something better.  In instances where one piece of gear has multiple effects the player wants to carry over, they can use "Super Tools" to transfer them without destroying the original piece of gear; however, these are very few and far-between (with only two to find in the main game), so they should be used wisely.

Parasite Eve overall is a rather short game, particularly for an RPG; it clocks in at about ten hours for a first playthrough.  However, it does have another nod to its survival horror inspiration in that it attempts to introduce some replay value by unlocking new features once the main game is completed.  This comes in the form of the "EX Game", allowing the player to carry over their bonus points, keep one weapon and armor of their choice from their previous playthrough, making the enemies significantly stronger, and unlocking a new area to explore.  This comes in the form of the Chrysler Building, a 77-floor dungeon with numerous boss fights and powerful gear to collect, as well as sporting a slight "roguelike" feel in its randomized floor layouts.  The top floor is also home to a secondary final boss, and defeating them will unlock an alternate ending to the game's storyline.  This affords some extra fun for both power-gamers interested in maxing out their character's stats and more casual ones who just want to see an alternate ending for the game's story.

In the end, Parasite Eve is an odd middle ground between a survival horror title and an RPG.  While it doesn't prove to be exceptional in either area, it is nevertheless an entertaining experience and a fascinating look at the odd, experimental nature of Square and gaming as a whole in the era of its release.  If you're looking for an unconventional take on the horror genre or just a decent action-RPG title with a horror bent, give it a look. 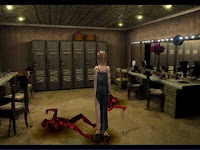 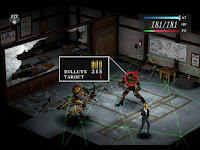