Korean company Softmax throws their hat into the JRPG arena with Magna Carta, seemingly trying to cash in on Square's Final Fantasy X with heavy similarities in its visual style and overall design.  But does Magna Carta manage to provide a memorable experience of its own, or does it just prove to be derivative and uninteresting? 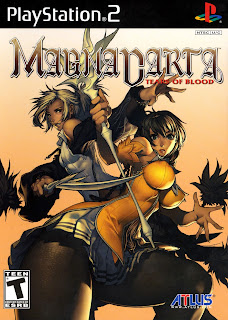 Whether you love or hate the series, there is no denying that Final Fantasy has been a huge influence on the Japanese RPG genre, and for better or worse, Final Fantasy VII was its biggest breakout, turning a once puzzle-heavy and grind-oriented gaming experience into something more dynamic and movie-like.  Characters in the games, both good and bad, saw new levels of depth, and stories began to candidly explore themes of religion, humanity and what makes oneself into who they are.  Of course, this all still took place on a backdrop of battling monsters, quaffing potions and upgrading one's equipment to overcome greater challenges, but that all began to take a backseat to exploring more complex and interesting themes.

Magna Carta: Tears of Blood was one of many attempts to fit into this new turn for the JRPG genre, this time masterminded by Korean developer mostly unknown to the western world.  (In fact, this game and its sequel were their only titles to get a western release).  It saw a relatively low-key release in 2005 from Atlus, a company that, at that time period, was slowly transitioning from being a low-key publisher of cult classic RPGs to a mainstream name with successful western releases of Shin Megami Tensei: Nocturne and Digital Devil Saga.  As a result of this, Magna Carta largely flew under the radar of many gamers, probably not helped by it getting some rather underwhelming review scores from critics.

It flew under my radar as well, though for slightly different reasons.  I took a look at a few screenshots and promptly wrote it off as a Final Fantasy X copycat, which, as those who know me know, is a game I did not enjoy in the slightest.  Many years later, however, I decided to finally give the game a fair chance, and after doing so... well, my original impression still mostly stands.  The game's visual style is very reminiscent of Final Fantasy X with its elaborate character designs and flashy combat animations, and the overall design of the game feels very similar, being largely comprised of generic pathways full of monsters.  The level design follows the general uninspired trend of having every path that isn't the way forward being a dead end with a treasure chest, and story events must always be viewed in a strictly linear fashion - one is frequently stopped from going down one path at a fork until they explore the other one and view a plot scene, for example.  While the game does not feature a random encounter system, the gameplay is slowed down in similar fashion by a mechanic that allows the player to move at one of two speeds.  One can either move either slowly and carefully, which gives them a much greater radius to see enemies and treasure chests on the map; or run, which drastically limits the player's vision and greatly increases the odds of them missing chests or being surprise-attacked by enemies.  There is really no compelling reason to ever use the latter; though one is sorely tempted to in order to speed up the game, the frequent surprise attacks they endure will only end up costing them more time and resources in the long run.

Taking a cue from most other JRPGs of the time, Magna Carta attempts to weave a complex narrative, telling the story of two races at war (the Humans and the beast-like Yason) and a special unit called the "Tears of Blood" who all hold a grudge against the Yason for different reasons.  This theoretically could lead to the characters bonding over their common cause whilst also each having their own contribution to the overarching narrative, facing the demons of their pasts and giving them each something of a character arc.  Theoretically.  These themes are certainly present in the game, but the execution leaves much to be desired.  An overly awkward translation, some extremely lackluster voice acting (complete with frequent, awkward pauses in between lines) and a muddled narrative that throws back-to-back character scenes at the player in rapid succession, often with no context or frame of chronological reference, makes the storyline a headache to follow and nearly impossible to take seriously.  The characterizations as a whole also feel rather underdone, with characters abruptly dropping plot points into the narrative with no prior setup and rarely having any depth or humanity beyond the basic motivations given within moments of their introduction.

But while I wasn't thrilled with Final Fantasy X's character designs, linear world layout or especially it's story and characters, I can say that for what it set out to accomplish on the gameplay front, it at least did a reasonably good job.  Sadly, this is another thing that Magna Carta does not have in common with one of its main inspirations; Magna Carta's gameplay is relatively pedestrian JRPG fare, usually consisting of little more than repetitious, bland dungeons and the occasional break to stop and restock supplies, with no interesting minigames or change-ups to the gameplay to keep the experience fresh.

There is at least a hint of an interesting idea in the game's pervading Chi system, which aligns each characters' attacks to the area in which they are fighting.  Fighting in a mountainous area, for example, causes attacks of the Mountain Chi to deal increased damage and greatly reduces damage inflicted by the opposing element (Celestial).  Using attacks of a particular element will cause that area's element to slowly deplete, and once it is completely emptied, attacks of that element will lose much of their effectiveness, requiring the player to wait a while for them to recharge (and swap other party members in who use attacks of different elements to continue doing damage).  One can also alter the elemental influences in an area by using elemental spells on Lanterns strewn throughout, which will increase the influence of that element and reduce the influence of the opposing element.  A spell crafting system also exists in the game, where one can combine two spell items of compatible types together to create a new spell, often with a more powerful or useful effect.  Were these ideas played up a bit more and better integrated into the game's overall strategy, they could have added quite a bit of depth to the game; sadly, this never really happens.

Combat in the game feels a bit like a hybrid of Shadow Hearts and Star Ocean, having the player move their characters freely about the field, swap between actively controlling them with the shoulder buttons, and performing sequences of timed button presses in order to attack.  Sadly it's not a very good hybrid, as it lacks any of the tension or dynamic feel that those games had to offer; characters you aren't actively controlling don't have any kind of AI control, simply staying in place wherever you leave them, and in order to perform an attack, one must fill up their Leadership gauge by standing perfectly still, wait for the gauge to reach a certain point, and then press Circle or X to initiate an attack.  They then must time three button presses as their icons rotate around a small gauge in order to successfully attack the opponent; should they miss even one, they will completely whiff the attack and lose all of the Leadership they have built up, requiring them to wait several more seconds for another attempt.  When they do succeed, attacks tend to take far longer than they should, with lengthy charging and attacking animations that each take several seconds to play out. It's something you're not likely to look forward to seeing anymore after the first couple dozen times it plays, let alone the next few thousand you'll have to endure it over the course of the game.

Another interesting, but flawed battle mechanic comes in the form of the "Trinity Drive", which acts as something of a Limit Break.  Each time a player performs a perfectly-timed attack (pressing all three buttons with "Perfect" timing), the Trinity gauge raises 5%.  One can press the Square button at any time to spend their accumulated Drive energy and deal more damage with their current attack depending on the amount spent.  However, should they miss an attack at any point, the gauge immediately resets to zero.  This, paired with the fact that one must perform twenty perfects for a 100% charge (equivalent to triple damage), means that this mechanic generally provides too minimal a payoff to even be worth the effort of using it.

The Leadership gauge's restoration rate is tied to another mechanic, with it raising faster depending on your party leader's affinity with his two active teammates.  Affinity can be raised by talking to other characters in the menu and selecting the right dialog options, or by giving them gifts.  Generally, answering a prompt correctly or giving a gift they like will boost it, while doing either of these things incorrectly will lower it.  This sounds like an interesting idea, as well as a creative way to have the characters bond with one another and strengthen the overall narrative, and it could have been were it well implemented.  However, the generally bland characterizations and lackluster translation makes this mechanic more trial and error based than intuitive, and as a result it really adds little to the experience other than some mild annoyance and save-scumming.

In the end, Magna Carta misses the mark.  It has some interesting ideas, and were the experience as a whole given some more polish,  this could very easily have been a cult classic RPG for the Playstation 2 platform.  However, its dragging pace, disjointed narrative, mediocre presentation and overall bland design drag it down, leaving it at that dreaded middle ground where it has very little to distinguish itself from any other game in the genre, good or bad.  A forgettable effort in almost every respect.