The forgotten middle child in Game Arts' Grandia franchise.  But does this title hold some merit, or is it overlooked for a reason? 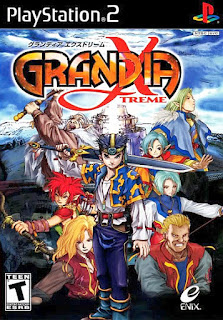 Grandia was always a fairly overlooked franchise, which is a tad surprising considering the name behind it.  Game Arts achieved a lot of acclaim in the Sega CD era with their Lunar titles, which were among the earliest console RPGs to feature animated cutscenes and fully-voiced characters.  This didn't change even when their games were ported overseas, even as their publisher in the west (Working Designs) drew heat for making unnecessary alterations to the gameplay and having some rather cheesy voice acting overall.  Nevertheless, their games proved to be hits on the Sega CD and again when they were released on the Playstation, particularly among collectors who were won over by their big-box releases with lots of cute packed-in extras like cloth maps and hardcover manuals.

Grandia, on the other hand, only saw release in the late days of the original Playstation and the dwindling days of the Dreamcast from less-known-at-the-time publisher Ubisoft, which probably played no small part in harming its exposure.  However, the handful who did play them found games with charm to spare - colorful visuals, creative interactive dungeons, some great characters and, of course, a combat system that ranked among the finest ever made.  Working on a similar principle to the Active Time Battle system from Final Fantasy, it also incorporated a fresh idea by allowing certain attacks to delay incoming turns, or even cancel them entirely, which greatly added to the strategic element of the game - if one was about to be struck by a big attack, for example, they would probably be better off Defending than trying to go on the offense, as they could easily be knocked out of their attack and left vulnerable.  Inversely, big boss attacks could easily deal massive damage or even wipe out the entire party, so cancelling those out before they even occur was a major part of surviving to see the next big fight.

With this system being as well-received as it was, Grandia Xtreme sought to capitalize even further by downplaying the story element of the game in favor of putting more emphasis on the combat and dungeons.  The pace of the overall gameplay is significantly improved in this regard, as there are virtually no load times in the game - going from dungeon to combat and back takes mere moments.  Battles are generally now much larger in scale, pitting the player against numerous and frequent groups of enemies, many of which use intricate combinations of debuffs, buffers and status effects for the player to deal with.  The player gains bonus experience from meeting certain conditions in battle, such as winning without taking damage or finishing off enemies with special moves.  Dungeons are also much more complex and laden with boobytraps - everything from falling ceilings to spikes to complex mazes, switch puzzles and floating platforms now make the dungeons much trickier to traverse than their predecessors.  Save points are much fewer in number than in any other Grandia game; generally, the player is only allowed to save back at their home base, which means that a death at any point can result in a lot of lost progress.

Grandia Xtreme also achieved some notoriety for its high difficulty level, particularly compared to its predecessors.  One factor in this is the new Mana Egg combination system, where two (or more) Mana Eggs can be combined together to create a more powerful one with new spells and a higher MP total for its equipper to utilize.  This is something that the player has to carefully manage as well, as Mana Eggs are limited in number and having too many high-level, high-cost spells can severely limit their options in a fight.  More infamously, though Grandia Xtreme has a massive difficulty spike at about the mid-point of the game with no option to backtrack in order to level up, so if one gets to that point and isn't strong enough to prevail over enemy groups, their run through the game is over and they're forced to restart.  Which is never fun, particularly in RPGs, which tend to take many hours of continuous play to complete (and even less so here, where opportunities to save one's progress are extremely restricted).

On an aesthetic front, Grandia Xtreme also feels somewhat limited.  The graphics here are only slightly better than Grandia II on the Dreamcast, which is slightly understandable given the relatively short gap between that game and this one (as well as the fact that development may have abruptly changed platforms after the Dreamcast was discontinued).  Less excusable, however, is the overall quality of the voice acting.  The back of the box proudly boasts that Dean Cain, Mark Hamill and Lisa Loeb provide voiceover for the game, and to be fair, they are easily the highlights of the cast (Dean sounds a bit intoxicated in some scenes, but given how corny the script is, I really can't say I blame him if he was sauced on the job).  The rest, however, are uncredited, and probably for good reason - they make very little effort to act, with nearly all of their dialog sounding like empty line reads done under duress.  This, paired with the overly long scenes in which voice acting appears and the fact that one cannot skip or even speed them up, means you'll often find yourselves listening to some very cringe-worthy voiceover for several minutes at a time at many points throughout the adventure.  Which only serves to make the already threadbare/lackluster story even more difficult to get invested in.  A disappointing turn, especially considering Grandia II had a cast of big-name actors and was surprisingly strong on that front, especially compared to the first game in the series.

To sum it up, Grandia Xtreme is what it is - a more gameplay-driven Grandia.  If you really got into the combat system in the older games and don't mind the lack of emphasis on the characters, story or setting, it's probably something you'll enjoy.  However, those who got invested in the earlier games and Grandia III for their adventurous feel and heartwarming dialog will probably be better off sticking to those instead. 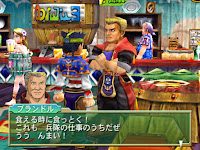