The second and final entry in the Worlds of Ultima spinoff series once again reuses Ultima 6's engine for a foray into a bizarre, unfamiliar world.  But does Martian Dreams' unique setting give it enough charm to make it worth playing, or is it just dragged down by its attempts at realism? 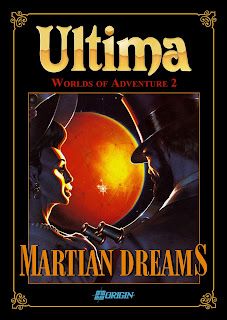 Ultima 6 marked a more "realistic" turn for the Ultima franchise, attempting to create a convincing world not only through a less video gamey style of world design, but by actually including numerous simulation elements as well.  Bread could be baked, cows could be milked, virtually any object could be moved around and stacked and NPCs all operated on their own time schedules according to the hours of the day in a surprisingly realistic fashion.  This certainly made the game's environment a more realistic one to explore and experience, though it also made it a more difficult and unwieldy game in some respects; in particular, the abolishing of the "world maps" and similar looking terrain made navigation considerably more cumbersome.  Having to manually manage one's inventory proved to be an irritating task at times, especially given the limited number of inventory slots available and the addition of a "carry weight" mechanic that limited how much a character could bring with them at any given time.  The fact that the game also had to keep track of all of these things, as well as a substantial portion of enemies and NPCs with their own AI routines, meant that the engine could become extremely laggy at times, with its framerate dipping into single digits in some areas.  One significant improvement, however, is the game's time cycle, with the day/night cycle progressing at a much slower rate and no longer forcing the player to burn light-generating items or rest every few minutes of gameplay.

Maritan Dreams, utilizing the same engine as Ultima 6, carries on all of these limitations, even going so far as to require the player to use a plethora of tools in given situations (handling radioactive materials with tongs and storing them in a lead box to prevent poisoning, for example).  Mars itself is a low-oxygen environment, requiring the player to seek out supplies of Oxium that steadily deplete over the course of their travels (and which enemies called "Oxygen Leeches" will frequently steal from them wholesale); without it, their characters suffer oxygen deprivation and have substantially lowered stats until they find another supply.  There is also no real "magic" system in the game, instead requiring the player to rely on berries that grant spell-like effects (such as temporary telekinesis and the ability to find "psychic imprints" on inanimate objects to uncover important clues).  The latter do at least continually reappear on trees throughout the game, though the lack of a consistent and reliable Oxium supply is a problem, particularly in the early stages when the player is trying to get their bearings and solve the first few quests to gain access to caches of them.

This is only further exacerbated by the design of Martian Dreams' world as a whole.  Lacking any kind of convenient fast travel system until very late in the game forces the player to traverse Mars on foot.  The similar-looking terrain proves to be the least of one's problems in this regard, taking a backseat to the fact that the game world as a whole is broken up by Mars' rail system.  In short, the world is separated by a series of deep tracks that effectively keep segments of the planet from one another, forcing the player to find bridges to make their way around, or simply discover alternate routes (which can require hours, of in-game time to find).  This, paired with very frequent combat against martian enemies as one makes their way around, makes Martian Dreams a  tedious game to traverse.  Power is eventually restored to the rail system, allowing for much easier travel, but it remains a persistent problem for a majority of the quest.

Despite its frustrating gameplay elements, however, Martian Dreams does continue in the tradition of doing what Ultima does best - presenting a detailed, realistic world full of interesting characters and thought-provoking, puzzle-oriented gameplay rather than wave after wave of braindead combat.  Martian Dreams contains what is easily one of its most imaginative setpieces, taking place during the Victorian era and following the exploits of groups of explorers (many of whom are based on real people) as they lead an expedition to Mars and discover a lost civilization beneath its surface.  This is easily its most intriguing element and, more than anything else, makes it worth enduring all the frustration for.

In a strange way, Martian Dreams encapsulates both the best and worst aspects of Ultima, and in particular the Ultima 6 engine - an incredibly detailed and intricate game world that is a chore to navigate at times, a realistic world and design to the point of being cumbersome to play as a video game, and, should one have the patience to endure all that, a great and imaginative storyline crafted by some of the best and brightest in the industry (Richard Garriott and Warren Spector).  There is a lot to like about Martian Dreams' script and design, but it feels like working a second job at times to get to experience its best elements.