The Phantasy Star franchise's second outing on the Sega Genesis was one of the very first 16-bit JRPGs released, as well as a new, darker turn for the franchise.  But did this new turn for the series pay off, or is this one title that should just be left in the past? 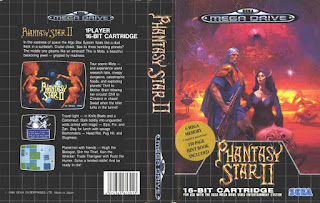 The JRPG genre was still a relatively small and niche one outside of Japan in the late 1980s, but a few games managed to make a splash.  The most prominent among these were probably the original Phantasy Star on the Sega Master System and Final Fantasy and Dragon Warrior on the NES, the latter of which was available through a giveaway sponsored by Nintendo Power magazine (and it must have found some success, as three more Dragon Warrior games saw release on the NES in the following years).

The Sega Genesis debuted in the late 80s, bringing with it a slew of arcade titles that met with varying degrees of success on the home format.  A few months into 1990 the platform also saw the release of Phantasy Star II, the sequel to the successful Master System classic.  And while it continued the science-fiction RPG motif of its predecessor, it took a step into a much darker realm of fantasy as well.  The story of the Algo system now drew elements from Philip K. Dick with its authoritarian government and oppressive atmosphere, and its storytelling took on a similarly dark turn with prominent character deaths and the decay of society being shown in surprising detail (one subtle touch being that churches - prominently featured in the original game - no longer appear here, being replaced by cloning labs).  Common science fiction motifs also arise in the form of the game's main antagonists, with armadas of killer robots and genetically-engineered, mutated monsters playing prominent roles in the story and adding some considerable challenge to the proceedings.  It is a bit surprising to see such dark themes in an era where video games were largely viewed as just fun and "kiddy" entertainment, and a lot of the thrill of the game is seeing just how far they go with some of them.

The gameplay of the game is largely similar to other JRPGs of the time, with a large portion of the proceedings dedicated to exploring dungeons, gathering money to upgrade equipment and grinding for experience points to strengthen one's characters so that they can overcome greater foes.  However, Phantasy Star II also takes some measures to ensure that this process is not as tedious as many other RPGs of th era.  For one, combat animations are kept relatively short (a nice feature in a genre where you'll likely end up seeing them hundreds or  thousands of times in a playthrough).  The combat menu is also intentionally designed with the repetitive nature of the genre in mind; one issuing of the "Fight" command causes the entire party to, by default, attack the enemy each turn.  Pressing a button during a turn will interrupt the automatic combat and give the player the ability to issue commands to their characters, such as casting a spell or using an item from their inventory.  Once a defensive spell or item is used, the character will then revert to attacking for the remainder of the battle; however, if an offensive spell is used, they will continue to cast it until their TP supply is exhausted (unless ordered otherwise).  This effectively cuts down on repetitive player inputs while allowing them to heal or cast defensive spells when needed.

In terms of design, Phantasy Star II also feels like a logical extension of the first in many ways.  There are twice as many playable characters as the first Phantasy Star, each with their own sets of weapons and skills.  Some easily fall into the common RPG archetypes like the warrior, the healer and the mage, but others are a bit harder to define; Kain, for example, has relatively weak weapon choices but several skills that deal devastating damage to machines, as well as some of the best armor choices in the game.  Anna has relatively low attack power and minimal skills, but wields weapons that hit all enemies at the same time, while Shir mostly serves as a mage character with her relatively low stats and selection of attack spells.  However, she also serves as a "thief" of sorts, occasionally vanishing after the player enters a shop and returning to his house with a stolen item (which have a small chance of being rare items that can't easily be acquired through normal means).  The overall balance of the cast also leaves something to be desired, with some characters proving useful throughout the game (one would be hard-pressed to survive the later stages without Amy, the dedicated healer) and others being virtually useless (particularly Hugh, whose weak equipment choices and anti-monster spells become all but useless when robotic enemies become the norm).

The game's dungeons have also seen a drastic overhaul from the first Phantasy Star, for both better and worse.  The game no longer utilizes the first-person perspective seen in the first Phantasy Star (and most CRPGs of the time), instead keeping the view in a third-person perspective as popularized by games like Dragon Quest.  This makes the dungeons easier to visualize at a glance, but also more difficult to navigate; floors are enormous and labyrinthine, and for much of the game it is unclear whether you're going up or down a floor (utilizing nondescript "teleporters" to transition between them).  The game also attempted to show off the Sega Genesis' graphical capabilities here, having many dungeons accompanied by pipes or clouds that scroll along with the player, giving a sense of depth.  This can prove a bit distracting at first (and falsely give the impression that there are barriers where none exist), though with a bit of time the player will eventually adapt to this and learn to ignore the upper layers.  Dungeons can also be quite long, with numerous floors to navigate and countless dead ends, and paired with random encounters, can quickly become frustrating.  Thankfully the encounter rate is far from the worst I've encountered in an RPG, though creating maps on graph paper (or finding them on the Internet) will still greatly mitigate the frustration factor here.

Finally, as per most RPGs of the time, Phantasy Star II is quite a grind-heavy experience.  There are several times where the player will have to stop for a while and farm experience from enemies in order to stand a chance in an upcoming dungeon, as difficulty leaps between them can be extreme, especially in the late stages of the game.  Fortunately this is not as tedious an experience as some games (COUGHDragonwarriorCOUGH) as the experience one gains is generally sufficient to gain levels in a relatively short time, and the combat system being geared toward clearing enemies with minimal player input cuts down on the tedium a fair amount.

In the end, Phantasy Star II remains a classic of the genre despite its dated elements.  Its dark storytelling and streamlined elements make it a much more fluid experience than most RPGs of its era, and the labyrinthine, puzzle-like nature of the game has enough to appease die-hard RPG fans as well.  It hasn't aged the most gracefully of the Phantasy Star titles, but Phantasy Star II is still a game well worth the attention of any fan of the genre. 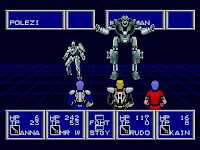 Developer: Sega
Publisher: Sega
Platform: Sega Genesis, Sega Saturn, Playstation 2, Game Boy Advance, PC
Released: 1990
Recommended version: All of the later versions are ports of the original Genesis title, so there are no significant differences that I'm aware of.  There is also a remake on the Playstation 2 titled "Phantasy Star Generation 2" that features altered gameplay, but it is only available in Japanese.