Released three years after its groundbreaking predecessor, Starflight 2 attempts to once again immerse the player in a grand mystery set in a dangerous sector of space.  But do its new features make this a compelling sequel, or was this just a last grasp at fame for Binary Systems before their dissolution? 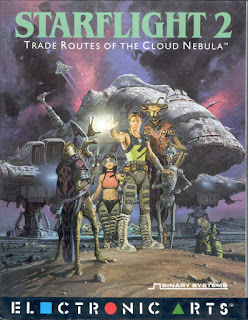 The original Starflight was a definite game-changer for its era with its vast universe to explore, numerous alien races to interact with and, beneath it all, a compelling mystery that required the player to uncover and follow a trail of clues in order to discover the true nature of a galaxy-spanning threat and put an end to it once and for all before it wiped out their home world a second time (having already done so to Earth centuries prior).  While it is slightly hampered today by its slow loading times, somewhat limited interface and hostile save system, Starflight is nevertheless considered a classic among long-time computer gamers and still well worth a look today.

What not as many people remember, however, is that Starflight also had a sequel.  This time, the Spemin (a weak and ineffective race in the first game) have suddenly acquired new technology to rival any other race in the sector and a seemingly limitless fuel source to run it.  In their arrogance, however, they also let slip a clue to their source for this new technology, leading the Arth federation to a new sector of space dominated by an enormous "Cloud Nebula".  As with the first game, the player is given a limited amount of cash to outfit a spaceship and train their crew, and must steadily gather resources, upgrade their ship and follow a trail of clues to unravel the overarching storyline.

Starflight 2's premise and overall design is very similar to the first, utilizing the same somewhat awkward interface (only really using a few keys and a plethora of menus for all options) and even having a nearly identical character creation system and ship upgrades.  The only real difference for the latter are the addition of two new technologies - Jump Pods, a one-use technology allowing the player to instantly leap to a specified location in space, and Blastopods, a devastating bomb weapon that can easily wipe out entire fleets of enemy ships.  Both prove useful in some situations, but their prohibitive cost and limited supply prevents the player from relying on them too heavily.

The largely recycled character creation system is also a bit disappointing.  None of the new races the player encounters in the game can be used to staff one's ship (save for in some rare diplomatic exchanges); instead, the player is stuck with the same five choices as in the prior game by default (Human, Velox, Thrynn, Elowan and Android), with the same bonuses and limitations as their Starflight 1 counterparts.  However, there are also a few interesting new twists stemming from these choices.  As the Velox and Elowan no longer play a large role in the plot (being almost entirely absent from this sector of space), there is no longer a conflict from having one or both in your party.  Choosing human characters may also put the player at a disadvantage, as they seem to be the most heavily affected by the strange properties of the Cloud Nebula - it will slowly cause them to lose their sanity and eventually die if they remain within it for too long.

On the technical side of things, Starflight also shows only a few cursory improvements over its predecessor.  The game now features VGA graphics, which allow for some higher-resolution character portraits and more on-screen colors, which in turn lets the player to more easily discern what type of planets and stars they encounter.  The game also seems to run significantly faster, with terrain generation and space-planet transitions taking much less time than in the original Starflight.  Combat in the game is much smoother as well; the attempts to mitigate lag and slowdown make it a much more fluid experience, though it still takes a substantial amount of time to end an encounter, particularly with large groups of stronger foes.  Starflight 2 as a whole feels considerably more text-heavy than its predecessor, with a lot more to offer in the way of NPC interactions and descriptive details of creatures the player encounters planetside, which adds a lot to its atmosphere in spite of its limited technical capabilities.  Some clever nods to series lore also exist; as one example, Endurium is now banned as a fuel source after the revelation at the end of the first game, and possession of it is now outlawed.  However, some less scrupulous races (the Spemin in particular) still utilize it as a fuel source, and the player can scavenge it from their destroyed ships after an encounter; however, returning to base with any in tow will result in it being confiscated, and the player will be scolded by their superiors and heavily fined.

As the subtitle of the game implies, there have also been significant efforts to introduce a virtual economy to Starflight 2, with a large portion of the player's profits now coming from establishing trade routes and exchanging goods between the various races.  Similarly, mineral gathering (your main source of income in the original game) is now almost entirely useless, with no guarantee that a native race will even accept any minerals you have on hand, much less pay you a decent price for them.  Also reversed from the previous game is the fact that gathering native life forms is now much more useful, garnering a decent amount of cash in trade on many worlds (no substitute for trading goods, but it can put you over if you need a bit more money to afford an expensive upgrade or artifact).  Other factors that come into play include fluctuating prices (which may make it worth one's while to hold onto a resource if they don't stand to make much profit at the current time) and the fact that many races hold valuable artifacts that can aid the player in exploration and combat, but are reluctant to give them up unless the player trades them a highly-desired resource first.

The main storyline of Starflight 2, as in the prior game, is slowly uncovered by conversing with alien species, uncovering clues on various planets and even looking at the star map to gauge important locations relative to the position of landmark constellations.  A few subplots (such as ending the civil war between the Tandelou Eshvey and the Tandelou Eshvara) must be completed to uncover vital clues, and the occasional bribe will cause some races to be more open to communicating with you.  The dialog system remains somewhat limited (with the player only being given the option to ask about broad topics and having to hope the receiving party will divulge some useful information before they arbitrarily break off the conversation), but the methodical nature of the game's puzzles, and the sheer strangeness of some of the races the player encounters, adds a lot to the mystique of the game.  However, the trading system perfectly complements this method to design, as it encourages the player to venture onward and discover new planets where trade can be conducted, which in turn allows them to meet new races and interact with them to uncover clues.

At the end of the day, Starflight 2 is a relatively standard sequel, retaining the same core gameplay while attempting to polish it up on a technical level and introduce some new twists to its design.  While  not quite as groundbreaking as its predecessor, Starflight 2 nevertheless provides an enthralling mystery and a captivating journey.  Its trading system addresses a significant shortcoming of the original game by encouraging exploration outside of the main plot, and the subtle upgrades to the game's coding make it a more satisfying and fluid game experience on the whole.  It may not be the most fondly remembered sequel in the history of CRPGs, but it's certainly worthy of a look for any fan of the original game or space sims in general.

Developer: Binary Systems, Electronic Arts
Publisher: Electronic Arts
Platform: PC, Amiga, Mac
Released: 1989, 1991
Recommended version: I'm unaware of any specific version differences because I've only played the DOS version, but the same problem of being unable to resume an improperly saved game is exclusive to the MS-DOS version.  Thankfully there are ways to bypass this limitation (creating backups of one's save files to a new directory works perfectly, and the GOG version comes with a built-in program to do exactly this).