The very first RPG available for the classic Game Boy, which served to fill a niche the portable platform had lacked to that point.  But does this portable RPG still hold up today, or was it just an adequate title for its era and nothing more? 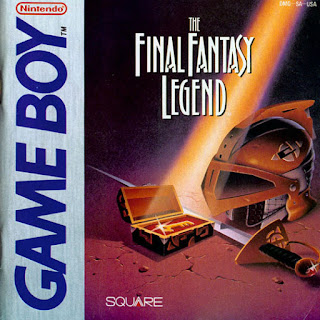 Makai Toushi SaGa came out at a time when JRPGs were just beginning to gain a foothold in the western market, with Square achieving some success with Final Fantasy and Sega having their own competitor in the Phantasy Star games.  They also saw an opportunity to fill a missing niche on Nintendo's highly successful portable system and commissioned Final Fantasy veteran Akitoshi Kawazu to direct the project.  For the game's western release, the game was rebranded "Final Fantasy Legend" to capitalize on that game's popularity despite bearing little resemblance to that game in design (and going on to spawn a completely separate series).  While the game ultimately garnered somewhat mixed reception, with much criticism directed at its unusual mechanics and steep difficulty, it reaped the benefit of being released in the right place at the right time and became Square's first RPG to sell over a million copies worldwide.  It also maintains a cult following to this day for its quirky design and setting and was a major influence for the Pokémon series, which would go on to become one of the most popular video game franchises of all time; a bit of an anomaly considering how unpopular the SaGa series is in comparison.

The player is free to customize their party as in the original Final Fantasy, though unlike that game, characters are not broken into distinct classes with their own set of abilities.  Instead, one is given a choice of races - Humans, Mutants (aka Espers) and several variations on Monsters.  Human characters gain no direct benefit from combat, but have up to eight slots for equipment and items to use in a fight, making them debatably the most versatile of the choices; however, they are also by far the most expensive to maintain, as they must buy each and every HP, stat upgrade and equippable item they use.  Mutants gain stats through battle (albeit randomly) and also randomly gain and lose abilities (elemental strengths/weaknesses and spells) from fights, making them stronger in the long run, but also much more volatile in usefulness - they can easily lose a powerful spell and gain a weakness to something a common enemy in a given area casts, with the player having little recourse for combatting this other than frequent saving and reloading.  Monsters are the hardest class to use well, with their abilities entirely dependent upon their current form, which can only be changed by eating meat after a battle - generally a stronger monster will grant them a more powerful form, though this is not always the case (and often a stronger one has less useful abilities than a weaker one).  End-game monsters can be extremely powerful, but using them well enough to last that long is a challenge in itself.

Another notorious feature of the SaGa series was the fact that skills and equipment in the game could not be used indefinitely.  Shields and weapons can only be used a set number of times (usually 50, sometimes less for more powerful ones) before breaking.  Spells in the game are equally fleeting, with mutant/monster abilities having a set number of charges between rest periods and potions, spell books and wands having a finite number of uses before they break as well.   For this reason, it's a good idea to always have a couple of spares around, as a character without any usable attacks is effectively dead weight for the remainder of the dungeon (which tends to be a problem for monster characters in the early stages).

Somewhat following up on this, the game also takes a cue from tabletop RPGs in that characters' lifespans are finite.  Each created character starts the game with three hearts that indicate "lives", and when they die and are revived at a healer, one heart is taken away.  Once all three hearts are gone, that character cannot be revived again.  The player can purchase more hearts to replace those lost over the course of the game; though they may prove prohibitively expensive in the early stages, this is generally a preferable option to letting a large time and money investment in a character completely go to waste.  This feature was apparently unpopular even among the game's fans, as later SaGa games either replace it with a "Life Points" system (with characters becoming "unconscious" when their HP hits zero and only "dying" when their Life Points are depleted through subsequent attacks, though they can still be replenished by resting) or simply having them automatically revive after battles with 1 HP.

In terms of gameplay, the title is also fairly emblematic of its era - turn-based combat with simple, static monster sprites and actions being described via text and simple animations.  There is also a substantial amount of grinding involved, with enemies giving a relatively low amount of money (especially early on) and equipment upgrades generally being quite expensive.  Keeping a balance between one's inventory and available weapon/spell uses is a significant element of the game's strategy, and late in the game it can be extremely difficult to survive if you don't carefully manage your weapon uses and money.

This is also not aided by the extreme jump in difficulty at roughly the midpoint of the game.  Once the player gets into the latter stretch, battles with enormous groups of enemies become relatively common, and spellcasting enemies do as well.  This proves to be problematic for human characters in particular, as their lack of Mana prevents them from effectively resisting magic.  More pressingly, however, there is no real way to effectively heal the entire party at once; pair that with large groups of enemies that cast spells that hit the entire party, and you can easily get wiped out no matter how much grinding and equipment upgrading you've done to power up.  The high encounter rate (with battles sometimes occurring with each and every step) and unreliable "Run" command (even with maxed-out Agility) only further compound this frustration, turning the late game into a frustrating ordeal of constant saving and resetting.

On the flip side of this, the game's bosses are remarkably easy in comparison.  Having only a single enemy turn to deal with greatly reduces the potency of full-party attacks, and even their high-damage moves can frequently be reduced in potency by having a proper skill, or even negated entirely.  Further compounding this is a notorious bug with the "Saw" weapon, making it an instant kill against any enemy whose Defense stat is higher than the player's Attack stat (the inverse of what the developers intended); this provides an ironic benefit to having a weak human or monster character in the party, and if nothing else, makes Makai Toushi Saga the only game where you can cut the final boss in half with a chainsaw and instantly win the fight.

Makai Toushi SaGa marked the beginning of the SaGa series and many of its hallmarks - a large emphasis on random elements, a strange and surreal setting that combines elements of high fantasy, mythology, urban fantasy and science fiction, and uniquely bizarre mechanics that change drastically from game to game.  However, it also has a lot of unsavory elements of the period - its random elements cause the difficulty to fluctuate wildly, enemy encounters are extremely frequent and often overbearingly powerful, and it is possible to get trapped if the player runs their resources dry, requiring them to either return to an earlier backup save or simply restart the game.  It is worth a look for curiosity's sake, however, just to see how this strange and mostly-overlooked franchise got its start, as well as the aforementioned novelty of murdering various mythological figures with a chainsaw.  It is also a relatively brisk experience (about 10-12 hours for a first playthrough), which helps to offset some of the long-term burnout. 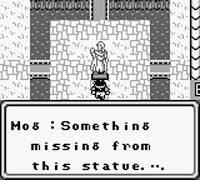 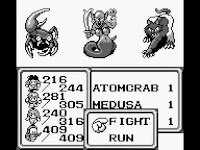 Developer: Square
Publisher: Square
Platform: Game Boy, Wonderswan Color, Mobile phones
Released: 1989, 1990, 2002, 2007, 2008
Recommended version:  The Wonderswan Color adds in enhanced graphics and cutscenes to build upon the fairly drab visuals of the Game Boy Version while retaining its surprisingly good music, and also seems to rebalance the gameplay slightly, making mutant/esper stat gains more frequent and allowing the player to preview what their monsters will transform into before committing to the change.  The high difficulty and awkward balance remain, but these help to mitigate some of the frustration with the original release.
Labels: ⭐⭐, 1990, Full Reviews
Newer Post Older Post Home