The Ultima franchise takes a leap into isometric gameplay and a more action-driven style of gameplay despite heavy fan protest.  But does this title manage to provide some entertainment in spite of its format change, or is it too ineptly handled to even garner fans on that front? 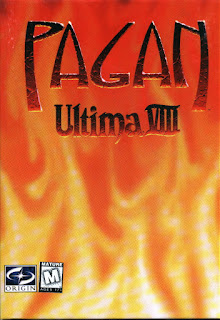 As with many franchises that came before (and many to follow), Ultima's new life under the Electronic Arts brand was fraught with problems; Serpent Isle was roughly 60% complete at the time of its release (with the latter half of the game feeling extremely rushed and lackluster in comparison to the first), and the infamy of Ultima IX's acting, buggy design an utter disregard of series canon cannot be understated among long-time series fans.  Between those, however, Ultima VIII saw a release in 1994 for MS-DOS, and while it is largely overlooked now due to its low sales at retail, there is much to be said about its shortcomings as well.

The first and most prominent change with Pagan was that, while it somewhat resembles Ultima VII with its open-world design and ability to interact with almost anything the player sees, the gameplay is now heavily reworked, giving the player more direct control over a single character (rather than a party) and putting a much greater emphasis on combat, platforming and evading traps.  The perspective of the game has also been changed to an isometric 3D layout in order to further emphasize the action element and introduce much more platforming to the game.

This might all have been fine had the game's overall design been conductive to this style of gameplay, but due to the game's choice of control scheme, this ends up making the game far more frustrating than fun.  To be precise, the game relies entirely on using a mouse, with every action the player takes mapped two the two buttons that were standard on mice at the time.  Switching in and out of combat mode, blocking, attacking, movement, jumping, and all interaction with the environment are all mapped to various combinations of those two buttons.  This, paired with the rigidly grid-based movement, means that even moving one's character around is a chore, as they must move the cursor sufficiently far from their character to get "walk" speed, angle it in the right direction to move where they want, and then right-click to move in that direction.  To say nothing of trying to conduct combat with nearby enemies, where they must move the cursor and right-click to orient their character, then rapidly move the cursor around to backstep, step forward and time left-clicks to block or attack...

Platforming in the game is equally clumsy, with the player required to click both mouse buttons to leap to a specific platform, and due to the slippery physics in the game, probably end up sliding off and plummeting into water/lava below more than a few times before they find just the right angle/timing for a jump).  This problem only gets worse in the unpatched version of the game, where moving platforms are much more prominent and jumping is not steered by the mouse, making some jumping puzzles all but impossible without inordinate amounts of save-scumming.

The game's storyline is also heavily based around acquiring the powers of the four Titans and mastering their schools of magic, so one would think they would at least do a good job making the magic system intuitive and easy to use; sadly, that's not the case either.  Rather than having a simple menu to select spells from and having the proper reagents automatically deducted from one's inventory (as in Ultimas 6 and 7), Pagan opts for not one or two, but three separate means of casting spells, all of which require their own separate systems of management.  Theurgy (wind magic) is the least cumbersome of these, requiring the player to craft "Foci" that cast a single spell and can be reused as long as their mana supply holds out, while Sorcery (fire magic) is by far the worst, requiring the player to place reagents and a focus on a pentagram and set black and red candles at the points in very specific locations, ensure only specific ones are lit, and click upon the pentagram to add charges to the focus; if even one element is wrong or a single object out of place by so much as a pixel, the process fails and the player has to try again.  Both times I played through the game, this got on my nerves so quickly that I simply ended up enabling the debug menu so that I wouldn't have to bother with the process at all.  Which isn't really a mark of good design!

But still, in spite of everything, Ultima has always fared well in the story department.  Surely they could get that right and redeem the game on some level, right?  Sadly, even that is not really the case with Pagan.  There was a strong attempt made to create a dark tone at least, as the game effectively portrays a bleak, oppressive setting under the thrall of four demigods and their unscrupulous servants.  The game world emphasizes this well, with numerous ruins found both on the overworld and through the vast cave systems in the game, seemingly destroyed by flooding and constant earthquakes brought on by the titans.   However, the dialog system is vastly stripped down from earlier Ultimas, with relatively few NPCs for the player to interact with and considerably less dialog for those that are.  There is also heavy evidence of numerous quests either being greatly shortened or even cut from the game entirely.  The most famous example of this is probably the Hydros quest, with the player simply being given the plot-crucial item by another character instead of having to go on a quest for it (and no spells from Tempestry being available to the player at all; not even via the cheat menu).  The overall narrative also feels very hastily thrown-together, with subplots like Hydros's attack on Tenebrae being the player's motivation for visting the Sorcerers (but once they arrive at the cabal, there is no dialog to this effect whatsoever) and Lithos in no way acknowledging the theft of an important artifact from his domain.  In fact, there is little depth to any of the characters the player encounters and virtually no motive for much of their own quest, with their goals and rewards being largely arbitrary for much of the adventure.

In the end, Pagan is a letdown for old Ultima fans, and it probably didn't earn the series too many new ones either.  Its attempts to reinvent Ultima's gameplay were uniformly ill-advised and poorly implemented, and the overall rushed design of its narrative and puzzles makes for a very frustrating game that makes the player reluctant to play it rather than getting them immersed in the experience.  Ultima IX may be the series' black sheep for its general bugginess and bad script, but Pagan is a far less satisfying experience than even that in my book.  Because no matter what flaws Ascension had, at least it wasn't a complete chore to play.