Square's reimagined version of the second SaGa game makes several tweaks to the original.  But is there enough of a change here to warrant another look, or is this an example of a "remake" that serves as little more than a glorified paint-job? 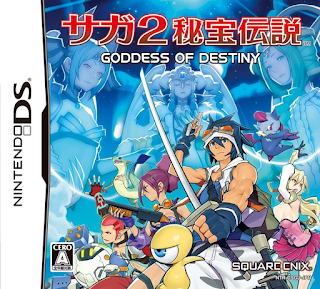 SaGa 2 ("Final Fantasy Legend 2" outside of Japan) was the logical followup to the first; the original game proved to be a runaway success due to its timely release on the Game Boy platform, so a sequel was inevitable.  So one year later came the second game in the series, which did away with several of the annoying traits of the original (such as the limited lives system) while introducing a few more of its own.

One improvement comes in the game's class system.  While the familiar human, robot and mutant races return, they have seen some overhauls.  Humans now gain stats from combat, which makes them a much more viable (and less expensive) class to use than in the original.  Mutants are largely unchanged, gaining and losing abilities at random and gaining statistics through combat, though at a somewhat slower rate than humans.  Monsters are also relatively unchanged, though the DS remake allows them to carry over abilities between forms (changing from a Medusa to another monster type will sometimes let them carry over the Stone ability, for example).  There is also a new class introduced in the form of "Robots", whose stats and abilities are entirely governed by the equipment they use - equipping armor will boost their defense and HP, for example, while equipping weapons will boost their other stats depending upon the type.  Equipping them with a weapon or shield will also immediately cut its total uses in half, but unlike other characters, they can restore these charges by resting at an inn.  They are also innately immune to most status effects, but owing to their low Mana, tend to be vulnerable to magic.  A somewhat tricky class to use, but they make effective tanks in the early stages of the game.

The game's storyline centers around the players gathering the 77 Magi (or "Relics" in the DS version), which are said to be ancient artifacts that grant their bearers special powers, and which some have abused to become new gods.  The player can also utilize Magi to some effect - some grant bonuses to stats when equipped (such as increased Strength or resistance to a particular element) while others simply serve as a means to complete puzzles - one allows the player to see in a bright dungeon, for example.  The DS version expands upon this by adding several new functions to the player's repertoire as they find Relics - the ability to dig for treasures on the world map, see enemies on the minimap, destroy weak walls to find treasures, and avoid damage from lava tiles to name a few.  This does add a nice sense of progression to the game as the skill set expands, as well as encouraging exploration by letting the player return to earlier areas to find items they couldn't reach on their first visit.

Following up on this, the leveling system seems to have been overhauled somewhat.  Namely, the player must now use items that correlate to a given stat in order for that character to receive gains.  Using agility-based weapons now boosts Speed, using strength-based weapons boosts Strength, and so on.  Somewhat unintuitively, equipment that boosts one's stats also stunts their growth, so grinding is best done without any stat-boosting armor or Magi equipped.  One must also face enemies that are relatively on par with the party in terms of overall strength to receive gains, so grinding against weak enemies is not an option either.  But even with all of this in mind, the random nature of stat gains can make these sessions extraordinarily long and frustrating.

A welcome change in the DS version of the game is the elimination of random encounters.  The Game Boy version of SaGa 2 was even more notorious than the first with its encounter rate, with battles against huge groups of enemies occurring very frequently, sometimes as little as every single step the player takes.  The DS version trades this in entirely in favor of visible enemies on the map, allowing the player to avoid them.  This does carry a risk, however, as if a player narrowly avoids an enemy but gets touched by another one, all of the nearby enemies will join in the combat as well, which can at times result in the player facing upwards of twenty enemies in a single fight.  And should they be faster than your party or get a surprise attack... well, you're generally reloading your last save, no matter how strong your party is.

As in the first SaGa game, the overall balance of this one leaves something to be desired.  Absorb spells still do massive damage, and any enemy with a full-party attack skill is a massive threat for much of the game owing to the lack of full-party healing options.  Encountering a group of enemies with such skills is pretty much an immediate death sentence as well, particularly late in the game when they do several hundred points of damage apiece.  Training one's speed to keep ahead of enemies, as well as having enough hard-hitting enemy group skills/spells, quickly becomes an essential part of the overall strategy, as the late game essentially boils down to "whoever gets the first turn wins".

The DS version does attempt to address this balance in a few ways, notably with the addition of a sidequest is added where the player can find the eight Muses over the course of the adventure.  One can also gift them with items they find (generally in hidden chests), which will grant them substantial bonuses to "MP" and allow them to unlock more powerful attacks to use.  One can also unlock the Arena of the Dead, which allows them to face more powerful versions of previous bosses in order to gain levels and items.  Completing the Nasty Dungeon and talking to the character that appears outside will put the player into a battle with very powerful enemies; completing this unlocks the Opaca of Souls, which pits the player against several powerful groups of enemies in a row, with victory granting numerous powerful and rare items.

MP is another new mechanic in the DS version.  After rescuing some of the Muses, the player can venture to the Castle of Fate in order to purchase Threads of Fate themed after emotions - Love, Hate, Strife, Friendship and so on.  Using these allows two of your characters to unite their attacks together for additional damage (slightly similar to the combo system from SaGa frontier), and will also affect the relationships between your party members, which in turn can unlock new events and sidequests that will allow the player to find extra items.  Clever use of these in battle can also allow players to break the usual turn order in order to defeat problematic enemies; for example, if one character gets a turn before an enemy group, they can use a unite attack to allow a second character's attack as well, and the bonus damage may just be enough to allow them to defeat that enemy group before they deal out massive damage that turn.

While SaGa 2 on the DS does make some improvements over its predecessor by adding new features and eliminating random encounters, it's essentially still the same game at its core.  The difficulty and overall balance remain very uneven, there is still a heavy emphasis on stat-grinding, and the added mechanics and areas mostly feel like they were simply added to give the game some token new content rather than well-integrated new features that enhance the overall experience.  Fans of the original will probably find something to like in the new content Goddess of Destiny provides, but if you found the original game too frustrating, this one probably won't do a lot to change your mind.