The second game in the revived Persona series proved to be a last hurrah for the Playstation 2, and a few years later it would get a followup on the PSVita that added in some new content.  But does this enhanced port push the game to even greater heights, or do its additions just prove to be superfluous and unnecessary? 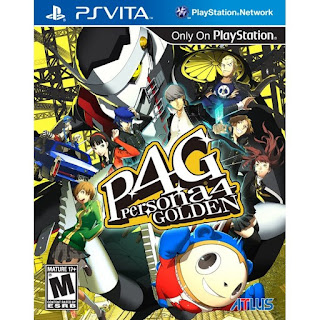 Persona 3 proved to be a unique and fresh take on the JRPG formula, particularly for the era in which it was released.  The game expertly combined elements of japanese RPGs (particularly the Shin Megami Tensei series proper), dungeon crawlers and even dating simulations together into a unique experience, with all of these elements combined together in a rather ingenious way.  Namely, raising one's "social links" would allow the player to grant their fused personae bonus experience and new skills, and by maxing out a Social Link, they would also unlock the ultimate Persona of that arcana, which were often quite powerful and would grant them a substantial advantage in the later stages.  However, the overall experience was somewhat hampered by the overly long/repetitive layout of the game's main dungeon and the random nature of quests, frequently requiring the player to seek out randomly-spawning rare enemies and hope they drop a rare item.

Persona 4 addressed this shortcoming by making the dungeons more distinct and concisely designed and reducing the random nature of many quests.  The Social Link system was more tightly integrated into the experience, with the main focus now being on building bonds with the main character's party members and the central focus of the stories being the characters themselves and the trials they overcome.  The player still gains bonuses through social links, but his party members gain new abilities as well, such as the ability to do followup attacks that would instantly stun (or even kill) enemies, take a hit in the player's place, and so forth.  At maximum level, the secondary characters' personas would evolve to a new form, gaining greater stats and usually losing their elemental weaknesses to boot.  Of course, having some very well-written characters, humorous dialog and an overall compelling narrative certainly helped there as well, making Persona 4 a very compelling game in terms of both gameplay and storytelling.  Thus, despite having a relatively simpler premise (that of finding and apprehending a killer), Persona 4's strong cast of characters, prevalent sense of humor and high-quality voice acting ultimately captivated the player in a much more effective and emotional fashion, making it easily the highlight of the series for many fans.

Persona 4 Golden, like Persona 3 FES before it, is essentially the same game as its namesake, just with some new features added on top.  There are two new social links in the game; one for an existing character that can potentially take the game to a "bad ending" if pursued to the end.  The other is more tightly integrated into the overall narrative, introducing a new character that becomes a frequent focus of dialog and characters scenes.  If taken to the maximum level, she will also unlock a new quest in the late stages of the game that opens an extended ending.  It's a clever new twist, though the fact that the player is stopped from advancing this social link beyond a certain point until later events occur (sometimes weeks or months later) can prove to be a bit frustrating at first.

The combat system in the game has been expanded for the better.  In Persona 3 (as well as some other Shin Megami Tensei games), the "Press Turn" system allowed both the player and enemies to get extra turns if they struck an elemental weakness during their turn; I personally wasn't very fond of this mechanic, as it tended to turn most fights into one-sided curbstomp battles, and having one weak link in a party lineup generally meant that a single attack on a character with an exploitable weakness would generally lead to the entire party being wiped out.  While that is still true to a degree in Persona 4, the player is given more options to counteract this.  The player now has the option to assume manual control over all of their party members, as well as a Defend option that protects them from a single weakness hit (if struck by an element they are Weak against, it will not count as such, but only once per turn).  Social link abilities can help with this to a degree, as if a player is about to be struck by an attack that would kill them, another character may jump in and take the hit instead.  But in a worst case scenario, the game is also equipped with a handy new feature - namely that the game now has the option to restart the current dungeon floor from the beginning rather than being forced to reload their last save, which cuts down on the overall amount of lost progress and player frustration.

Golden's narrative has also been significantly expanded over its predecessor, adding in numerous new scenes throughout the game.  While few have an impact on the overall storyline, they do add much to the game's characters and overall sense of humor, as well as allowing visits to some new areas that grant added benefits (like raising certain social links or simply viewing new character scenes).  Some of these elements are even integrated into the dungeon and battle aspects, such as new costumes characters can wear into battle (overall pointless, but amusing) and even some new party attacks, such as characters that are not in the active party riding into the battlefield on a moped to deal a followup attack after an enemy's elemental weakness is hit.  Most significantly, however, substantial weeks or months-long gaps in the narrative have now been filled in with new events, including the aforementioned bonus dungeon, which overall makes the game feel much more complete and cohesive than the original release.

A couple of minor hitches do exist for this version, though.  Two prominent characters in the game had their VO's replaced, with Tracey Rooney being replaced by Erin Fitzgerald (as Chie) and Sam Riegel replacing Dave Wittenberg as Teddie.  While the latter isn't a huge change, Erin Fitzgerald's Chie is much more shrill than Tracey Rooney's, which ended up annoying many people at first (myself included).  One does adapt to it a bit more as the play the game, but those who grew used to it with the Playstation 2 version of Persona 4 may still find themselves a bit wanting.  The overall difficulty of this version of the game has also been reduced, with Golden's "Hard" setting being roughly equivalent to the "Normal" difficulty of the Playstation 2 version, so those who want more of a challenge should probably start with that instead.

All things considered, though, Persona 4 Golden is a fantastic RPG.  It takes the creative combination of gameplay styles in Persona 3 and polishes them to a fine sheen, tying both of the game's major elements together in an elegant way and adding a compelling narrative to the mix as well, complete with some well-defined and colorful characters that make the overall game a joy to experience.  Whether you're a long-time fan of the Shin Megami Tensei series or just a casual player of Japanese RPGs, it doesn't get much better than Persona 4 Golden.