The second entry in Konami's grandiose war epic RPG franchise, as well as one of their most overlooked titles period.  But does this somewhat obscure title have anything to offer, or was it overlooked in the late '90s for a reason? 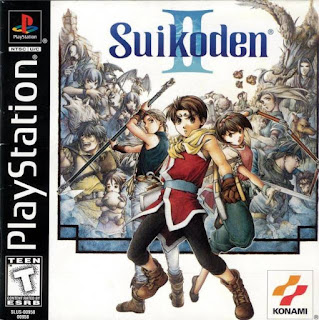 In the era before Squaresoft's mega-hit Final Fantasy VII, a few other franchises attempted to gain a foothold on the Playstation and establish themselves as viable names in the JRPG market.  Among them was Suikoden, Konami's attempt to combine elements of a traditional RPG with a storyline and gameplay elements that lent it the feel of a war drama.  Drawing inspiration from the Chinese classic novel "War of the Marshes", the player was tasked with recruiting the 108 Stars of Destiny and fighting back an evil empire in a setting that combined elements of fantasy, ancient Europe and ancient China.  While it was a bit rough, especially in comparison to its sequels, the original Suikoden became a modest success, gaining acclaim for its high stakes and grandiose feel despite its somewhat limited visuals and overall low difficulty level.

Three years afterward, when a plethora of 3D RPGs were making a big splash, Suikoden's sequel quietly slipped out in the background, seeing a very limited release and only a few low-key reviews across various video game publications (more than a few of which criticized it for still utilizing "outdated" 2D graphics).  Despite becoming a hit with fans of the original (as well as those who picked it up having never played the first game), Konami barely seemed to acknowledge it, seemingly more interested in pushing their other titles of the time (most notably their cinematic hit Metal Gear Solid).

It's all a pity, as Suikoden II has quite a lot to offer any serious RPG fan.  The high-stakes storytelling of the original game continues here, putting the player into a large-scale war between an encroaching evil empire and a handful of feuding city-states whom they must unite under their flag.  Each of these takes the form of a small standalone story, where the player must solve a problem the town faces.  Each area also has at least one recruitable character within, each with their own recruitment conditions to fulfill in order to add them to the party; some will not join until your castle reaches a certain level, some may require you to bring another NPC to them, and others still require you to partake in the game's minigames and side-quests (such as earning enough money through trading or winning 10,000 Potch in Chinchirorin).

The game also utilizes its premise in three different types of combat systems.  The most common is a turn-based system, wherein the player has a party of up to six characters and combats small groups of enemies and occasional bosses in a fairly traditional fashion.  There are also one-on-one duels, wherein the player has a choice of three moves (Attack, Defend or Wild Attack) and must predict their opponent's actions based on dialog lines, choosing the appropriate action to counter theirs in a  Rock-Paper-Scissors style: Defend beats Wild Attack, Attack beats Defense and Wild Attack beats Attack.  Finally, there are turn-based war battles, wherein the player gets a small group of units to move across a grid and must engage and defeat enemy forces, with each unit having differing statistics and a small selection of special abilities (such as the ability to heal or use "Fire Spears" that damage all units in a 3-square line).

Showing off its tactical inspiration, the 6-player battles also break from JRPG norms in a few ways. Each character can only equip a few item sets at a time to use freely in battle (empty slots can be filled from the general inventory mid-fight, but they must spend a turn to do this), and inventory space as a whole is somewhat limited, though the player has a storage room at their base where they can stash extra items they don't immediately need.  Spells are also slightly more limited than in most games, giving the player a set number of "spell levels" and charges for each that can only be restored by resting at an inn.  There is also a slight Chrono Trigger-esque mechanic in "Unite Attacks", wherein two or more units can spend their turns to perform a larger attack, usually with a drawback of some kind (such as dealing extra damage at the cost of dizzying a character, preventing them from attacking for a turn or two).  Finally, the player has a unique way to avoid some fights - one can either Bribe enemies, paying them a substantial amount of money for a guaranteed escape from battle, or, if the player is substantially stronger than the enemy, they have the option to "let them off", allowing them to leave without a fight (but earning no experience, money or items).

Of course, with a large cast of characters comes the concern that many of them will see very little (if any) use, with the player simply finding a few of the strongest ones and keeping them in their party as much as possible while ignoring the rest.  Suikoden II, however, handles the idea surprisingly well by introducing a cleverly-implemented experience system.  The total experience a character gains is divided by their current level, ensuring that lower-leveled characters will gain far more points and catch up to your main characters very quickly.  Each character one finds also has a unique skill set in some way, whether it be a unique spell rune, unite attack or just some interesting animations, and not all will be available for any given mission, so the player is given encouragement to try them all out and see which ones they like best.  Enlisting some characters will also prevent others from being recruited, which also lends the game some replay value.  If one also has a Suikoden 1 save file with all of the characters recruited and the good ending achieved, they can also unlock that game's protagonist as a powerful hidden character, which is a pretty cool bonus.

Suikoden II's overall presentation is very strong; despite being criticized for having "dated" 2D graphics in an era where 3D was becoming the new norm, it's very clear that Konami's staff put a great deal of effort into making this game stand out on an aesthetic level.  Environments and character animations are immaculately polished and beautifully animated, with details like casting shadows from light sources and surprisingly realistic interaction between characters (with some occasional anime-esque slapstick) lending the cutscenes a lot of personality.  The music in the game is also quite varied and extremely well-composed, with everything from oriental-sounding themes to vocal ballads to an intense, orchestral theme for the war battles.  However, a bug in the North American version of the game unfortunately prevents some tracks from playing properly, resulting in a few scenes (and several war battles) being set to awkward silence.

A few rough edges also show themselves in the game's translation.  While the overall story and narrative is very strong, this was still the era before well-polished RPG translations became the norm.  As a result, some dialog (particularly near the end) feels somewhat awkward and unnatural, and there is even some inconsistency in how characters' names are spelled (with Jowy being referred to as "Joei" more than once).  Worse, some dialog was also not translated at all, with the player seeing screens of garbled text when talking to some NPCs reminiscent of an unfinished ROM hack; such occurrences are rare, thankfully, but it does feel out-of-place from a company that generally shows such pride in the quality and polish of their games.

Despite some minor hiccups, however, Suikoden II is a very well realized war epic in the form of a Japanese RPG.  Its strongly written characters, moody soundtrack, polished animation and overall gameplay design that encourages player experimentation all lend themselves to a fantastic experience, and the compelling lore of Suikoden's world fits it in perfectly with other games in the series (both its predecessors and those that would come later).  It's a game that never really got the recognition it should have in its heyday, but with its recent release on the Playstation Network, hopefully a few more gamers will come to recognize its brilliance. 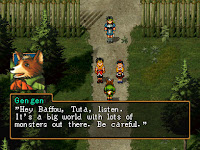 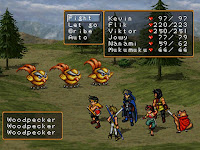 Developer: Konami
Publisher: Konami
Platform: Playstation 1, Playstation Network
Released: 1999, 2014
Recommended version: The PSN release is a direct port of the original Playstation version, and since the physical version of the game is exceptionally rare and expensive nowadays, is probably your best bet to play it.