The first major success for legendary developer Richard Garriott and a pioneer of the CRPG genre.  But is this dungeon-crawling adventure worth undertaking today, or is it just too dated to provide a compelling experience? 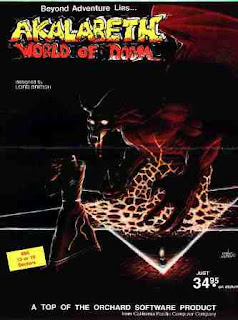 The Ultima series needs no introduction among RPG fans; it's a legendary franchise responsible for pioneering countless trends that helped to shape the genre into what it is today, and remains a unique and influential one to this day, serving as a prime inspiration for games like the Elder Scrolls series and Dragon Quest (which went on to inspire basically the entire JRPG genre).

Before the name "Ultima" became a part of the public consciousness, though, Garriott's first breakout success saw a release.  First surfacing as a self-published game sold in a small computer shop in Texas, a copy eventually made its way to California Pacific Computer Company, who brokered a publishing deal to give it a wider release.

That game was Akalabeth: World of Doom, a dungeon crawler inspired by the likes of Dungeons and Dragons and the works of J.R.R. Tolkien.  While a relatively simple game even for its era, it did bring a few innovations to the table.  The player was given a choice of two classes to enter the game with - either a Fighter (who can utilize any weapon but gets entirely random effects from Magic Amulets) or a Mage (who has more limited weapon choices but can control the effects Magical Amulets grant).  It was also the first game of its kind to utilize a first-person viewpoint whilst in dungeons, displaying walls and enemies in a simplistic wireframe style.  A few other elements would go on to become mainstays of the Ultima franchise, such as the use of command hotkeys and requiring the player to constantly replenish their supply of food to survive, with the game ending immediately once the total hits zero.

Of course, being inspired by Dungeons and Dragons and early PC titles as a whole, Akalabeth also has a large amount of randomness in its design.  The player's starting stats are determined by virtual dice rolls, and the quests they are given are somewhat randomized as well, though the last two will remain constant in each game (slaying a daemon and a Balrog).  The game's world and dungeons are also generated based on a player-provided seed, which gives numerous possibilities for playthroughs and allows the player to revisit a particular generated world as many times as they wish.  The Magic Amulet also has a random element associated with it; while Fighters get entirely random effects when using one, the Mage can control what spells it casts.  However, one spell available, titled "Bad??", has three randomly-chosen effects - turning the player into a frog (reducing all of their stats to 3), backfiring (halving their HP) or turning them into a "lizard man" and multiplying all of their stats by 1.5.  This can single-handedly make or break a playthrough of the game, as just one or two castings of Lizardman can make the player into a near-unstoppable force while a single casting of Frog can make the player weak and ineffective, unable to defeat even basic enemies anymore.

Being from 1979 and sold on a low-capacity floppy disk, one would expect Akalabeth to offer very little in the way of storyline.  One would be correct in that assumption - while some elements of the Ultima franchise are already in place here (there is mention of the evil wizard Mondain in the game's manual, and one is given quests by Lord British), there is only the barest of player motivation on display in Akalabeth.  Simply put, the player is tasked to eliminate increasingly dangerous monsters by Lord British, and once they succeed in entering the tenth (or lower) floor of a dungeon and slaying the Balrog, they are made into a knight, given a pat on the back and presented with the option to continue playing.  There is no proper final boss or even a real ending to the game; it's just a simple dungeon-crawling experience meant to test one's luck and skill.  However, the choice of two classes does give the game a bit of replayability, as does the choice of nine difficulty levels (with slightly different ending text for beating it on the highest setting).

When all is said and done, Akalabeth is what it is - a product of its era that, while it kicked off a legendary franchise and brought some innovations to the genre as many Richard Garriott games would, ultimately doesn't stand the test of time particularly well.  Fans of Ultima will probably be interested in it as the origin point of the franchise, but those looking for a meatier dungeon crawling experience or something a bit more story-driven would probably be best served elsewhere.

Developer: Richard Garriott
Publisher: California Pacific Computer Co.
Platform: Apple II, DOS
Released: 1979, 1980
Recommended version: The widely-available DOS and Apple II releases are relatively similar, though the former is an unofficial fan release.  There is also an enhanced DOS version packaged with the Ultima Collection that adds in CGA graphics, MIDI music and the ability to save the game, which brings the experience a bit closer to modern standards.  It requires some tinkering to run in DOSBox, however.