Several members of Fallout's original development team return to the franchise for another go.  But do they manage to make New Vegas live up to the franchise's legacy, or has Bethesda's acquisition of the franchise taken it too far down a new path? 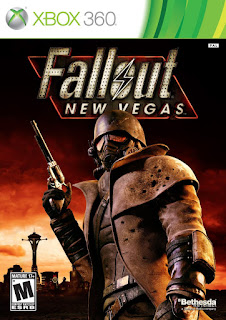 Fallout 3 was a divisive game among long-time fans of the series; the game began as "Project Van Buren" under the development of Black Isle, but when Interplay encountered financial problems in the early 2000s, the studio was shut down and the game was cancelled.  The Fallout IP was later bought out by Bethesda Softworks, who decided to develop their own version of Fallout 3, completely discarding all of the work and concept done for Van Buren.  Bethseda's version eventually came out in 2008, prompting heavy criticism from long-time fans on almost every front, but most especially changing its gameplay style to more closely match Elder Scrolls with its first-person perspective and real-time action, making it feel more like a shooter with some RPG elements on top than a full-fledged role-playing game.

From a personal standpoint, I felt that Bethesda did a solid job with Fallout 3; while I take issue with some elements of it as feeling out of place (particularly the virtual reality segment and the extremely silly Liberty Prime), I felt that they put in a strong effort trying to reconcile the game's setting and lore with fan expectations, even going out of their way to address some common criticisms with in-game dialog (such as the disparate designs of the Super Mutants and their take on the Brotherhood of Steel).  They also took advantage of the 3D perspective to create a convincingly bleak Washington DC devastated by nuclear bombs and under a mutant threat, with some excellent visuals and a vast, convoluted network of subway tunnels and ruined buildings to explore throughout.  They even attempted to recreate some of the series' sly, dark humor with elements like a seemingly idyllic community that gives way to something much darker, and an innocuous building whose entrance is rigged with an elaborate Rube Goldberg device that eventually triggers a shotgun trap to blast the player.  The player even had the option to complete most quests in numerous ways, which showed that Bethesda was at least trying to emulate the free-choice of the earlier Fallout games.  While they didn't completely succeed at making Fallout 3 live up to the franchise's legacy, one certainly could not say they weren't trying to.

New Vegas was later announced, being heavily touted among series fans for reuniting some of Fallout's original developers with the franchise and promising a more authentic Fallout experience.  Indeed, the setting was even moved back to the western end of the country, reincorporating some familiar settings and factions from earlier games (including the NCR and the familiar reclusive, technology-hoarding Brotherhood of Steel) and even reintroducing some concepts from the scrapped Van Buren version of Fallout 3 (such as Caesar's Legion).  The game also returned to an almost entirely open-ended style, giving the player a basic premise and storyline and letting them reach the end in almost any way they pleased.

In that way, New Vegas was very much a return to what drew people to Fallout in the first place - namely that it was an actual role-playing game.  The player was free to interact with NPCs and complete quests in any order and fashion they wished, and no matter what choices they made, all were equally valid.  The player could also ally with or make enemies of the numerous factions in the Mojave, each of which had their own motivations and quest lines to follow, and their choices in any given area and with any faction would unlock different ending scenes.  This, paired a vast number of minor quests to complete, NPCs to interact with and areas to explore, gives New Vegas the feel of a sprawling adventure.  The sheer amount of content New Vegas provides, as well as the fact that completing some quests will also close off opportunities for others, ensures that the player can only see a small fraction of what the Mojave has to offer in a single playthrough, lending the experience tremendous replay value.

The gameplay also returns to Fallout's style of design in some ways despite retaining Fallout 3's engine.  The player is given a selection of Traits as the game opens (giving them both advantages and drawbacks right out of the gate), and there is a much heavier emphasis on skill checks than there was in Fallout 3 - nearly every quest in the game has at least one dialog or option that can only be passed if a given skill is at a high enough level.  These generally allow the player to avoid a difficult fight or, should they choose to fight anyway, give them an advantage.  Should the player wish it, they can also choose the "Wild Wasteland" trait to unlock some sillier events (usually in the form of pop culture references) and give the game a bit more of an off-beat vibe a la Fallout 2.  There are some new options to provide a different gameplay experience as well, such as weapons that can be outfitted with modifications for a variety of benefits, a crafting system that allows for new types of equipment, stat-boosting "chems" and even new ammunition types (such as armor-piercing rounds and energy cells that do more damage at the cost of causing weapons to decay faster) to be created, and even a "hardcore mode" that makes healing crippled limbs more difficult and requires the player to periodically eat, sleep and drink or suffer stat penalties (and eventually die).

The game's writing also proves to be a strong point; as per Obsidian standards, it conveys a sly yet confident tone throughout, with well-written and complex characters as well as some surprisingly funny off-beat humor.  Even the add-on DLC missions show a surprising amount of effort in this regard, making every effort to expand upon the lore of the Mojave (and the Fallout franchise as a whole) and culminating in a showdown with one of the most well-realized and interesting rival characters in any video game, let alone an RPG.

The biggest shortcoming of New Vegas, however, is definitely its engine.  While I didn't mind the transition to a 3D action-based style of gameplay as much as some, the fact that Obsidian had to work with the same buggy, limited engine that Oblivion and Fallout 3 sported definitely hampers the experience in some ways.  In addition to the usual complement of awkward wall clips and enemies ragdolling in silly ways (sometimes rocketing into the air after taking a fatal blow or clipping into scenery, unable to attack or be attacked), the vast web of scripted quests, objectives and placed objects also ends up pushing the Gamebryo engine to its limits, frequently resulting in things like markers pointing to misleading locations or NPCs and objects simply disappearing, leaving some objectives unable to be completed.  Indeed, almost every quest in the game has at least one or two bugs associated with it, and while I personally didn't encounter any that made the game unwinnable, the fact that innocuous actions can sometimes render quests unable to be finished can result in a fair bit of having to load back earlier saves and repeat work already done.  Indeed, even the game itself seems to acknowledge this, frequently making auto-saves and giving the player a grand total of 1,000 save slots to utilize (which can quickly fill up one's hard drive if playing on the console versions).  Several patches have been released to fix the most egregious bugs, but even with all of these, New Vegas remains a notoriously volatile experience.

In spite of that, however, New Vegas provides a fantastic role-playing adventure, giving the player a tremendous amount of freedom to explore a vast, dense web of lore and interesting sights.  The strong writing also proves to be a great asset, highlighting Obsidian's talents at their best and ultimately leaving the player lamenting that, in spite of the sheer amount of content the game provides, they were prevented from including even more due to time constraints and engine limitations.  And that they may never get a crack at the series again as New Vegas ultimately fell short of Bethesda's lofty expectations for sales and review scores...

Developer: Obsidian Entertainment
Publisher: Bethesda Softworks
Platform: Playstation 3, XBox 360, PC
Released: 2010
Recommended version: All versions are plagued by their own sets of bugs, glitches and crashes, but the PC version is the most stable in my experience.  It also allows for fan modifications (including several prominent bug fixes) and the use of console commands to bypass a plethora of glitches without having to redo entire quests, so that is the one I recommend.