Level-5's debut game as well as one of the first launch titles for the Playstation 2.  But does this experimental RPG stand the test of time, or is this one adventure that's destined to be forgotten? 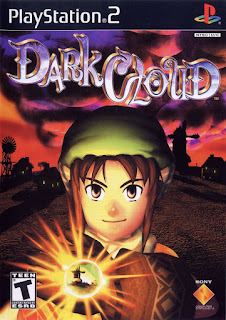 Level-5 has become a beloved company among gamers, producing more than a few well-regarded games in their time.  Probably their best known and most successful franchise is the Professor Layton series of puzzle games for handheld systems, which has seen no less than five sequels and one crossover game.  However, they first made their mark in the world of gaming with Dark Cloud, an RPG from the Playstation 2's early days that Sony touted as their platform's "Zelda Killer".

A curious marketing choice to be sure, as Dark Cloud, while it resembles Zelda in some ways, provides an extremely different gameplay experience more reminiscent of a traditional dungeon crawler, with randomly generated floors to traverse and a heavy emphasis on upgrading one's characters and equipment.  Puzzle solving in the game is also considerably less involved, mainly revolving around the game's main subquest - reassembling towns destroyed by the game's villains in order to unlock an item that will grant access to the boss of a dungeon.  Other things that present themselves as obstacles - such as impassable barriers - are usually resolved by finding ain item via town-building or recruiting a new character, so there's not really a lot of the logical thinking that became a trademark of Zelda's puzzles.

Dark Cloud's most iconic feature is doubtlessly its town-building aspect - as one ventures through the dungeons, they'll recover parts for that area's respective town's buildings, landscape and citizens.  Once enough are recovered (and placed in their proper place), a scene will trigger with those townspeople that plays some humorous dialog and usually grants the player a reward; some necessary to advance the main story, others just nice bonuses.  As the town becomes more complete, more chests will also spawn around the buildings in the area; these usually contain items that upgrade the stats of one of your six characters; either Fruits of Eden (which raise maximum HP) or character-specific items that grant permanent boosts to defense.  These quickly prove essential to survival, as enemies can easily do enough damage to deplete the player's health in only a few hits.

The game's other most well-known feature is its intricate weapon upgrading tree.  Each character's weapons have a plethora of statistics - core stats, extra damage against specific enemy types, and elementals.  Each of these has respective upgrade items that can be attached to a weapon to grant it temporary boosts, and if equipped when the weapon levels up, those boosts will permanently become bound to it.  Once a weapon's stats reach certain levels, the weapon can also be upgraded to a new form with higher maximum stats and possibly some extra abilities (such as causing enemies to drop more cash, or granting more AP upon defeating an enemy).  This can be a very long process, but it also encourages the player to track donw the game's rarest items - gems which grant a substantial boost to many stats at once.  Unfortunately, this is also marred by a rather serious flaw, namely that once a weapon's WHP is depleted, the weapon breaks and all of the upgrades applied to it go to waste.  Keeping a hefty supply of weapon repair powder around is therefore an essential part of the game's strategy.

Combat in the game is also distinctly unbalanced.  As mentioned, most enemies will drop the player in only a few unblocked hits while the player may require several to put them down.  This can be a particular problem against large and armored enemies, who deplete several points of weapon durability with each hit the player lands, which in turn can quickly deplete the player's supply of weapon repair powder and leave them unable to combat later foes.  Some characters, particularly melee characters, are also at a great disadvantage due to their extremely slow attack animations; Goro in particular has a lengthy jumping animation before each of his attacks land, which enemies can easily hit him out of at any point prior to it landing.  Ranged characters generally have a much easier time in most battles, even if they are marrred by a curious flaw - their attacks get much weaker as the distance between them and their target grows, which all but requires them to stay within a few steps to deal decent damage.  Still, it's generally easy enough to launch attacks at an enemy from a safe distance with them, rendering your melee characters all but useless save for removing the occasional character-specific obstacle.

All in all, Dark Cloud is an interesting experiment that hasn't stood the test of time particularly well.  It has some interesting gameplay mechanics in its town-building and weapon upgrading, though these tend to get a bit tedious and frustrating, particularly with the breakable weapons and the sheer amount of grinding required for some of the top-tier weapons in the game.  The somewhat lackluster combat and overall design also hampers the experience, turning it into a lengthy game of hoarding healing items and spamming ranged attacks to make it through each dungeon.  It stands as a piece of history for being one of the first games on its platform, but there were much better RPG choices available even at the time, and it would be followed soon thereafter by a more polished (and more traditional) alternative in Shadow Hearts. 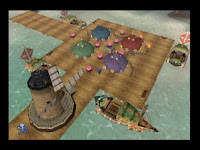