The end of a legendary franchise and widely considered to be its weakest entry by many long-time fans.  But is this game really as bad as they say, or are there some redeemable elements to be found in its design? 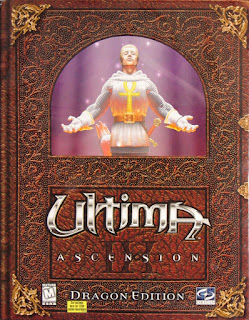 To many longtime Ultima fans, the final entry in the franchise proved to be a massive letdown, taking what was formerly a unique, surprisingly deep open world RPG experience and dumbing it down with childish scenarios and gameplay that relied more on platforming and switch puzzles than anything else.  To others, Ultima IX is a so-bad-it's-good title, with the laughably amateur acting and trite scenarios providing comedy and the awkward, buggy engine allowing some bizarre and hilarious possibilities for sequence breaking.

From a personal standpoint, I fall into neither camp.  My first exposure to the series was in the mid-1990s with Ultima VII and I only got further into the series after playing the Ultima Collection several years later, so I missed the wave of controversy surrounding Ultima IX's inauspicious release that was laden with game-killing bugs (including at least one that rendered the game impossible to complete, resulting in Electronic Arts releasing a debug cheat so players could bypass it).  It wasn't until about 2003 that I had a computer capable of running the game, and while I was more than a bit surprised at how little of a resemblance it bore to its predecessors, I nevertheless found some enjoyment in what it attempted to be, rather than what I thought it should be.  If nothing else, I can certainly at least appreciate the effort that went into the game's design; the developers made efforts to continue making Ultima' IXs world feel like a seamless one, with almost no visible "loading zones" as the player ventures across the landscape and even through the game's numerous dungeons.  There was also a strong attempt made to give the dungeons an "Ultima-like" feel, with some clever gimmicks and puzzles that lend each of the eight main dungeons a unique feel.

Ultima IX also features surprisingly good production values for a 2000 release, with large, detailed environments and surprisingly well-rendered characters and textures for the era.  The story is also carried through a number of high-quality CGI cutscenes, which had little (if any) of the video grain and plasticy character models of many games of the era.  They even went all-out with the voice acting in the game, giving the main character and every NPC they encounter a surprising amount of voiced dialog; even with the general lack of professional actors, the fact that they went to that much effort certainly shows that they put their all behind the game despite its troubled development.

On the other end of that coin, the brutal working conditions at Electronic Arts are also very prevalent in this product, with Ultima IX feeling like a very rushed game overall.   Even after numerous patches, the game shows hints of poor balance (with some enemies dealing tremendous amount of damage even with the best armor and taking dozens of hits to put down) and plenty of awkward bugs - shopkeepers standing on counters, enemies clipping into terrain (and each other) and puzzles just plain not working as intended (generally requiring the player to revert to an earlier save to reset it and try again) are frequent sights throughout.  The game also still crashes quite often, with one unskippable plot scene in particular causing my game to crash numerous times until I turned down the graphical settings to minimum.

More than the gameplay, though, a major point of contention among long-time series fans is the writing in the game.  Gone are the complex tales of morality and strong characters with a small novel of dialog apiece in order to make way for something more akin to a very cheesy animated movie.  The Avatar in particular is portrayed as an infallible force for good despite his questionable actions in prior games, which leads to a lot of lame speechifying about the importance of the eight virtues.  The story is similarly silly, with the Guardian corrupting the virtues via the eight columns into the "glyphs", which causes people to act the opposite of how their town's virtue dictates - the inhabitants of Trinsic (town of Honor) become cowardly and deceptive while the people of Yew (town of Justice) turn their town into a haven of frivolous lawsuits and wrongful execution.  This, paired with the lousyy acting overall, gives the unpleasant effect of making Ultima IX feel more like an over-the-top parody of the series than a respectful send-off.

Beyond that, though, much of the dialog and writing in the game is just plain bad.  Not only for the comical and amateur acting, but for the fact that it has so little consistency to its tone or content.  At times, the game shows a surprising amount of awareness of the series' past, with NPCs speaking at length about the Avatar's previous adventures and even some of his questionable actions in earlier titles.  At other times, however, there is a huge and fundamental misunderstanding of even basic elements of the series, with the Avatar spouting infamously terrible lines like "What's a Paladin?" (which remains a dialog option even if Paladin is chosen as your starting class) and not even remembering what the Codex of Ultimate Wisdom is despite it being the foundation of his character.  There is also the prevailing problem of the story itself - that the inhabitants of any given town are being corrupted by forces beyond their control, yet the Avatar insists on spouting cheesy speeches about how "stealing is wrong" to them anyway.  It leads to more than a few cringe-worthy moments, especially for a series that, to this point, was so much smarter than this, thrusting the player into complex, morally-ambiguous scenarios and challenging them to come to solutions that would benefit everyone involved.

Further capstoning this is the game's overall storyline, which contradicts numerous established plot points from earlier games and even itself at times.  One of the most infamous examples of this comes near the end of the game, where the player must summon Pyros the Titan to open the path to the Stygian Abyss.  This makes little sense considering the player slew Pyros in the previous game, and less so when one also factors in that, being an agent of the Guardian, it's extremely unlikely he'd help the player at all.  Some of these can at least be partly explained by the game's troubled development, as many of the FMVs were repurposed from an earlier draft of the script.  In this case, the original version of the story had the Guardian discreetly attempting to turn Lord British against the Avatar by showing him visions of his questionable actions on Pagan, eventually culminating in a scene of the Avatar violently overthrowing him and imposing his own dark rule on Britannia.  With that subplot dropped for time constraints, however, the Pyros FMV was instead reworked into an actual event in the game's story - a rather inelegant solution.

At the end of the day, Ultima IX is a disappointing title on many fronts, with a sloppily written storyline, cringeworthy dialog and gameplay that, while not much reminiscent of Ultima anymore, at least provides a somewhat serviceable Zelda-like experience.  If nothing else, however, it serves as a perfect example of what happens when corporate profits get priority over artistic vision, taking what was an outstanding, highly beloved RPG franchise and turning it into a shadow of its former self.  And while not a particularly good game in its released state, it is at least interesting to see how the developers managed to salvage what they could out of their original plans, making it worth a play for curiosity's sake if nothing else. 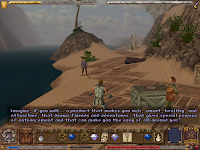 Developer: Origin Systems
Publisher: Electronic Arts
Platform: PC
Released: 2000, 2012
Recommended version:  The original release of the game is incompatible with most modern operating systems (and most virtual machine software I've tried balks at running it, even under native OSes).  However, the GOG release of the game is patched to run under Windows 7/8/10, so that may be your only choice if you want to play it.  I also strongly recommend getting the version 1.19 fan patch, as it fixes numerous lingering bugs in the last official patch and generally provides a much more stable experience.