One of Capcom's earliest forays into the RPG genre, and their first prominent effort on a 16-bit console.  But does this title manage to distinguish itself, or is it just another RPG fated to be left on a back page of the history books? 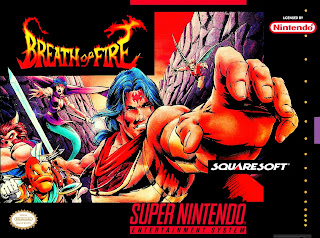 RPGs in the early 1990s took a lot of steps to diferentiate themselves from their earlier days.  The technology was now there to have more in-depth storylines, stronger soundtracks and even a somewhat more cinematic style to go with them.  Of course, they also attempted to keep with this style on the gameplay front, adopting a more fast-paced style of design and gameplay to match the more cinematic style that began to creep its way into the world of gaming.

Capcom threw their own hat into the ring with Breath of Fire, a game which sought to differentiate itself in its gameplay, and does so in ways that few (if any) other RPG franchises to this day have duplicated.  Each character in your party has their own abilities, and each proves useful in its own way.  As a few examples, Bo can hunt monsters on the world map (which can earn the player a plethora of useful items), Ox can smash down weak walls, Mogu can dig at certain points on the map to uncover hidden items, and Karn can pick locks and fuse party members together in various ways (each with abilities of their own).  In fact, the game's overall design is a bit reminiscent of titles like Metroid or Symphony of the Night in that regard; you'll frequently encounter things you can't interact with yet over the course of your journey, but later in the game you'll be able to return with the proper party member and finally access it.

As per Capcom's standards, Breath of Fire also excels greatly in the presentation department.  The visuals in the game are downright gorgeous, with a vast amount of detail put into the environments (with almost every town and dungeon the player encounters having a distinct style and feel to it) and large, fluidly-animated character sprites for both allies and enemies bearing Capcom's distinct style (no surprise, as many of the designs were conceptualized by Keiji Inafune).  Music in the game also very much lives up to their standards, pushing the Super Nintendo's MIDI capabilities to their fullest to deliver a grandiose, orchestral soundtrack accompanying every step of the journey.  It's easily among the best on the platform, and one that I feel often gets overlooked when conversations turn to great RPG soundtracks.

Breath of Fire came out in the era when accurate translations of Japanese games were still relatively unheard of, and is no different in that regard.  However, it does fare a bit better than Capcom's usual fare (and especially the sequel, Breath of Fire II) due to the fact that its translation was not done in house, but provided by its publisher, Squaresoft.  It was handled by one Ted Woolsey, however, so it does come with a lot of his usual embellishments, which may prove distracting to some.  The abbreviated item names (all trimmed to fit a 6-character space) can also be somewhat confusing, but the game does at least provide descriptions for every item the player collects via the question mark icon on the item menu, so discerning exactly what an item is and does is never a matter of trial and error.

On the downside, Breath of Fire did come out on the tail end of the era when RPGs were still largely "grindfests", and the game does require a fair bit of fighting enemies just to power up and earn gold for equipment (though considerably less so as the game goes on).  Many of the bosses in the game also largely come down to battles of attrition, which can be a bit frustrating as they continue to fight well after their visible health bars are depleted, leaving the player in the dark about how much more damage they have to inflict before the fight will end.  And if you simply don't have enough resources to hold out until then... well, you're doing that whole fight over once you power up a bit.

This ironically seems to go in the opposite direction in the latter half of the game, though, as many of the more powerful and unbalanced character abilities begin to surface.  Karn's fusion ability in particular can be comically broken, as the characters it creates are not only a fusion of those characters' abilities, but a combined total of all their stats.  Thus you end up with party members who have several hundred more HP than your standard ones and who can inflict vast amounts of damage, usually enough to one-shot weaker enemies and deal hundreds of points a round to the bosses.

There are also a few of the usual annoying design quirks of the era, particularly in the form of items that require a huge amount of grinding/sheer luck to attain.  One in particular that comes to mind is Ox's ultimate weapon, which requires the player to sell numerous random items from their own inventory at the flea mart and hope a random visitor just happens to have it (and that they have enough cash for it when it finally comes up).  The odds of this happening are extremely low, so completionists can expect to be at it for many, many hours.

All said, Breath of Fire is a solid and largely overlooked RPG on the Super Nintendo.  While it may not be the strongest title in terms of story or characterizations, its gameplay shines through, providing the player with plenty of interesting sights to see, locations to explore and secrets to uncover.  A well-polished, enjoyable and charming adventure that's well worth a look. 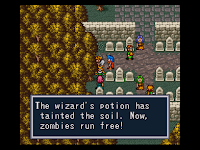 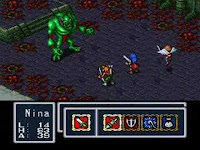 Developer: Capcom
Publisher: Squaresoft, Capcom, Ubisoft
Platform: Super Nintendo, Game Boy Advance, Nintendo 3DS, Wii U Virtual Console
Released: 1994, 2001, 2014
Recommended version:  The GBA port gives greater experience/cash rewards to make the game flow faster, but also has substantially worse music and more washed out visuals (an attempt to make them lighter for easier viewing on a portable screen).  So I'd recommend sticking to the SNES version or one of its ports (Wii U or 3DS).