Game Arts struck gold in the Sega CD era with their Lunar games, and their remakes in the Playstation 1 era also met with considerable acclaim from fans.  Behind both of those, however, they created a new IP in Grandia.  But is this an adventure worth undertaking, or does it remain among Game Arts' less-known franchises for a good reason? Game Arts' RPGs, while they may never have been the top of the line for the genre, certainly attracted attention among genre fans on the merits of their strong writing and memorable characters, and even if the gameplay generally wasn't as complex or nuanced as some others in the genre, they still managed to provide a considerable length and challenge.  They also made good use of the CD technology of the platform to deliver animated cutscenes, voice acting and high-quality music, which only enhanced the game's atmosphere beyond what could be done on the limited capacity of a cartridge.

Grandia is no different in that regard, though it stood out to many due to the fact that, in an era where graphics were becoming more realistic and stories much darker in tone, Grandia retained a more simple style, telling a more light-hearted story with a vibrant and exaggerated cast of characters (each with some humorous, cartoonish animations) and colorful animation.  Even the overall premise fits this tone, telling the story of a teenager who leaves his home in search of adventure and ends up on a quest to save the world.

Grandia also utilizes a unique visual style compared to most Playstation 1 and Saturn RPGs; rather than utilizing entirely 3D visuals, or 3D character models on 2D backgrounds, the characters are instead always rendered as 2D sprites in 3D environments.  This allows for some clever dynamic environments such as flowing water or rotating weathervanes while also allowing the characters to be fluidly animated, and it's easily among the best looking RPGs on the system as a result.  The 3D environments also tie into the game's dungeons, with several instances of traps the player must avoid or obstacles they must traverse by activating icons present throughout the dungeons.  These can activate all manner of things like causing plans to open to clear a path, moving blocks to create a staircase up, and so on.  It all works well for what it tries to accomplish, but the overall poor voice acting - especially in light of the quality of Lunar's - is a definite downside.

Grandia's most famous element, however, is undeniably its combat system.  Like several of the Final Fantasy games, it's something of a mid-point between real-time and turn-based, with each character and enemy in the battle getting turns dictated by an action bar at the top of the screen; once their icon reaches the "Act" marker, they get a turn.  However, it also possess a unique dynamic - the player can launch "combo" attacks for more overall damage, or use "Criticals" that can slow down an enemy's next turn or even cancel it entirely if they land a hit just before they get an action.  This lends a surprising amount of strategy to the game, as the player has to do much more than just use their best attacks constantly - they must gauge their position on the gauge relative to their enemies, and if one is about to land a hit on them before they can act, they may be better off defending or dodging instead.  Conversely, if an enemy is about to use a strong attack, the player must judge whether they should defend or take the risk and cancel it entirely before it launches.  The fact that nearly every boss encounter in the game has multiple active "targets" to contend with, each capable of launching their own attacks, also requires some judgement for which one provides the biggest threat and which they can stand to take a hit or two from.

Tying into this is the game's unique skill system.  Each character in your party not only has a choice of several different weapon types (each with their own unique skills), but four different elements of magic.  By using skills for a particular weapon or spells for a type of magic, they level up and grant the character stat boosts - more HP, higher attack power, more defense, and so on.  As they power up, schools of magic can also combine their effects together to create new, more powerful elements.  Fire and Wind combine to create Lightning, for example, while Wind and Water create ice spells.  Several of the top-tier skills also require high levels in all of a character's available weapon proficiencies, so changing up one's strategies throughout the game is an important tactic.

In an era where dungeons were becoming shorter and more static to make way for story scenes, Grandia's definitely disappoint either.  As mentioned earlier, they have an occasional action movie feel at times with traps the player needs to avoid and various triggers they must activate to open a pathway forward.  But that aside, they are also surprisingly vast, sometimes requiring two to three hours to navigate through and collect all the treasures from.  They can also be somewhat difficult to navigate at times due to an abundance of similar-looking textures and layouts, though though the game does at least provide a compass with a pointer to direct you toward the next exit, which at least gives you something to orient yourself with.

Of course, a common problem with such long dungeons is the fact that the player can simply get burned out on them; between their long length and the frequent enemy encounters, it's often easy to get disoriented and turned around.  Grandia, however, at least makes an effort to address this.  As in the Playstation Lunar ports, there are no random encounters; all of the enemies in a dungeon are clearly visible on the map, which gives the player a chance to outmaneuver them if they don't want to fight.  Defeated enemies will also not respawn as long as the player remains in that particular dungeon, so in a worst-case scenario, the player can at least go through and eliminate all the enemies so that they can devote their full attention to a particular puzzle before them.

While it may not be one of the better-known RPGs out there, Grandia is certainly a quality one nevertheless.  Its charming cast of characters on a world-spanning adventure lend it a classic feel, but its gameplay most definitely lives up to modern standards as well, providing one of the finest combat systems the genre ever produced and some surprisingly thoughtful and challenging dungeons as well.  It can get a bit drawn-out and tedious at times, but this is still an adventure well worth undertaking even today. 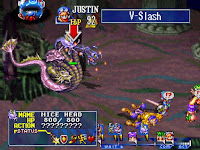 Developer: Game Arts
Publisher: Game Arts, SCEA, Ubisoft
Platform: Sega Saturn, Playstation, PSN
Released: 1999, 2010
Recommended version: I'm unaware of any specific differences in the Saturn version, but the Playstation port of the game is the only one available in English, so if you're reading this review, that's probably the one you're going to end up playing.