Interplay's return to Computer RPGs was lauded as a true role-playing experience, unlike the heavily combat-driven design of most others of the era.  But does it live up to the hype, or is it just another mindless shoot-the-monster simulator? 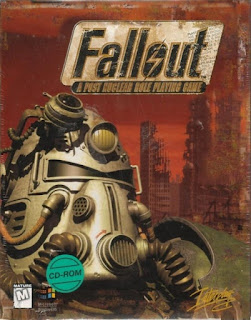 Intended at first to be a sequel to Interplay's 1988 hit Wasteland, Fallout eventually became its own IP when EA showed no intention of relinquishing the rights to that title.  Both titles do show a lot of similarities (taking place in a North American setting after a nuclear war), but Fallout ultimately took advantage of the technology of the era to create a more fleshed-out experience in every respect.

As its tagline implied, Fallout was intended from the get-go to be an actual role-playing game; rather than solving problems only with force, the player had a variety of options in almost every scenario, and all of them were equally valid.  For example, to resolve a kidnapping that happens early in the adventure, the player can take a stealthy approach to free the hostage, negotiate for her release, challenge the leader of the raiders to a one-on-one duel, or simply go in guns-blazing and wipe them all out.  One even had the option to go down a less savory route and join the raiders themselves, and the game treated all of these options as equally viable.  It is even possible, with some effort, to go through the entire game without your character killing anyone.

Supporting this, the game features a very complex character customization system, deeper than perhaps any other to that point.  The SPECIAL system gives the player seven stats - Strength, Perception, Endurance, Charisma, Intelligence, Agility and Luck - and a list of skills, three of which can be "tagged" for faster growth over the course of the game.  The player also has a choice of up to two Traits, which each carry their own advantages and drawbacks.  For example, Small Frame grants the player an extra point of Agility at the cost of significantly reducing their total carry weight, and Jinxed causes the player and everyone they encounter to get many more critical failures in combat.  The numerous combinations of skills and abilities available, as well as the gameplay styles afforded to each, lends Fallout some considerable replay value.

For every 3 levels the player gains, they also gain access to a list of "Perks" that grant them new abilities or enhance their existing ones.  Action Boy gives the player an extra AP for each combat turn, Bonus Rate of Fire reduces the AP cost of using guns (allowing the player to sneak in an extra shot or two per turn), and Fortune Finder will double the amount of money the player finds in chests and random encounters.  Unfortunately, these don't support the multiple gameplay styles nearly as well; many of them require a high stat or skill level as a prerequisite, and getting to that point with that skill/stat generally makes them redundant.  As a rule of thumb, only the combat skills are the ones that prove consistently useful here.

Where Fallout truly shines, however is in its writing.  A post-apocalyptic setting generally lends itself to a heavy mood and a bleak amosphere, and the same is true to a degree in Fallout.  However, it also possesses a more light-hearted tone in many respects as well, seemingly drawing some inspiration from 1950s-era science fiction and comic books to deliver some more outlandish elements (like giant animals and people mutated into more grotesque monsterish forms), as well as a wry sense of humor in many respects.  This is also punctuated by the occasional "talking head" NPC, who are given a fully-animated model and even some surprisingly decent voiceover with the aid of professional actors like Tony Jay, Jim Cummings and Richard Dean Anderson.  There is even a surprising amount of dialog with many NPCs in the game, as well as a large number of text logs and computer files to read that effectively offer a lot of insight into the world and its lore from the perspective of people who lived it firsthand.  This alone makes Fallout a much more compelling experience than many RPGs that fall back on the lazy "plot codices" that simply explain the events leading up to the current day in a dry Wiki-like format.

Despite a somewhat poorly-planned Perk system and some unbalanced gameplay elements, Fallout was (and remains) an important milestone for the genre. It proved to be instrumental in turning Computer RPGs away from being mindless monster mash-fests and truly putting the Role Playing aspect into them.  By giving the player numerous paths to complete each objective and a true sense of consequence for each choice they make, Fallout felt much more alive and dynamic than any CRPG before it, and it continues to be one of the finest examples of design to this day.  Its sequels may have surpassed it in many ways, but without such a strong foundation to build them on, we'd probably still be seeing a lot more mindless first-person monster bopping simulators. 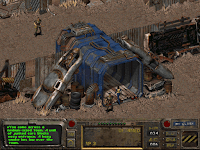 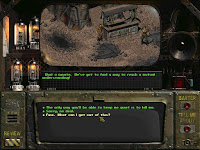