Generally considered the black sheep of the Phantasy Star franchise, its third entry saw development under an entirely different team from the two prior titles and took its story in a completely new direction.  But is there enough here of merit to make this game worth a look, or is this one spinoff that's better left alone? 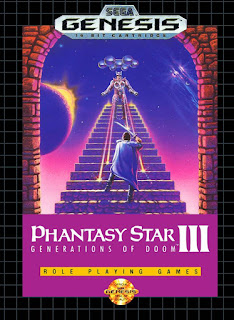 At a glance, Phantasy Star III certainly doesn't live up to the lofty expectations its predecessors provided.  While its visuals and music are adequate for a 1991 title, they are definitely not up to the high standards set in the first two games.  Its setting is also an anomaly, taking place in what first appears to be a fantasy world far removed from the familiar Algo system and possessing much less of a science fantasy bent than its predecessors.  Several core mechanics are also changed up, including a complete overhaul of the magic system - the characters in the game are given all of their spells right out of the gate, and the player is tasked with reassigning a "magic grid" to determine how powerful each individual spell is.  This grid can be freely adjusted, but each spell that gains power costs the spell on the opposite side of the grid some power.

In spite of everything, though, Phantasy Star III does contain some interesting twists of its own.  The fantastic world soon gives way to some science fiction elements, with androids playing a prominent role in the proceedings and the world itself being much more than it first appears.  There is also something of a running narrative as well, with an underlying theme of two races at war for a millennia finding out that they are not as different as they seem.  The game still lacks a lot of inter-personal reactions (as did the genre as a whole at the time), but there are at least hints of some characterizations throughout, with some characters changing alliances over the course of the adventure.

As its title implies, Phantasy Star III's main selling point is in its Generation system - at the end of each story, the player is given a chance of two characters to wed, and as the next chapter begins, they take control of that character's children, embarking on a new quest.  Each protagonist not only has a unique set of abilities and characters to recruit, but an entirely new story as well, with the previous protagonist's choice playing a large role in the events that develop in the present one.  There are a total of seven stories to experience and the player can only see a total of three over the course of any one playthrough, which lends the game some considerable replay value.  This was honestly a pretty innovative idea for a 1991 game, and it seems only relatively recently has begun to surfice in other big-budget RPG franchises.

On the gameplay front, however, Phantasy Star III is more of a mixed bag.  Combat in the game still moves relatively briskly thanks to the innovations put forth in Phantasy Star III, with the player having the option to take turns one at a time (better for boss encounters or dangerous foes) or simply activate auto-battle at a press in order to reuse their last attack over and over until all the enemies are slain.  However, the overall challenge definitely suffers from the game's rushed development time - while the first quest in the game provides a modest challenge, the later ones are considerably less so, with the player generally able to steamroll most enemy encounters and most of their spells becoming all but useless in favor of normal attacks.  There is also an abundance of backtracking and inobvious solution-hunting required during some stages - usually in the form of talking to every townsperson in a given village in order to trigger a plot flag that will allow the player access to a new area.  Standard for the era, certainly, but it may catch those used to a more streamlined RPG experience off-guard.  On the other hand, Phantasy Star III's dungeons are generally much shorter and more concise in design, so those who disliked the second game's lengthy, convoluted 2D mazes may have an easier time getting into this one.

The game also shows considerable evidence of being rushed, particularly in its final quests.  Not only are there several unused items in the game's code, but there are a number of caverns strewn across the game's worlds that can never be entered under any circumstances (though the addition of temples the player can teleport between somewhat mitigates this).  All four of the final quests, while they start differently, all coalesce in a very similar fashion with little variation, and even two of the game's endings are extremely similar to one another, with the only difference being a slight graphical change.

Still, while Phantasy Star III may not live up to the lofty pedigree of the other games in the series, it brings some unique ideas to the table.  This, paired with its relatively brisk runtime (about 10-15 hours for a first playthrough) and differing story paths, make it worth visiting at least once.  I honestly held hope for a time that this title would follow in the footsteps of its predecessors and get a remake that would allow it to more fully realize its potential, but as plans for a stateside release of those games fell through, I doubt it'll happen now.

Developer: Sega
Publisher: Sega
Platform: Sega Genesis, Game Boy Advance, Wii Virtual Console
Released: 1991
Recommended version: The later versions of the game are direct ports of the original Genesis title, so all are very similar.  The Game Boy Advance version has some slight changes, including restoring some unused enemy encounters, but is otherwise the same.  The game is also included on the Sega Genesis Collection (PS2/PSP) and Sonic's Ultimate Genesis Collection (PS3/Xbox 360) compilations.