Sega's Phantasy Star is a beloved classic among long-time genre fans, and it got its start on the Master System in 1988.  But does this title rise above the limitations of its era, or is it simply another generic dungeon crawler, fated to be forgotten? 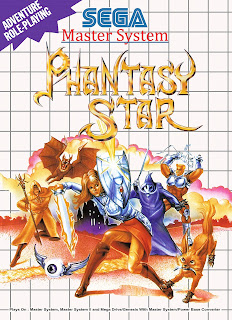 The Japanese RPG genre was beginning to gain a foothold in the mid-to-late 80s, with Dragon Quest and Final Fantasy becoming big hits in Japan and modestly successful elsewhere.  Sega had their own contender as well in the form of Phantasy Star, a title which incorporated a combination of science fiction and fantasy elements (particularly inspired by Star Wars) rather than the heavy Dungeons and Dragons influence of its competitors.  This certainly lent it a unique flair, as well as allowing them to incorporate elements like spaceships, robotic police and laser guns without feeling terribly out of place.

Of course, a slight change-up in setting would only help it to a point; after all, earlier games like Ultima and Might and Magic had already worked science fiction elements into their otherwise fantastic settings.  So Sega also took advantage of the Master System's capabilities to create a game that was much more colorful and fluidly animated than most RPGs of the era.  Not only do the enemies in the game show several frames of attack animation each (a feature that wouldn't appear prominently in some other big-name franchises until the Playstation 2 era), but even the dungeons themselves show off this feature, featuring smoothly-animated backgrounds as the player walks through the tunnels and even turns directions.  The sound design in the game is equally polished, with some catchy and memorable tunes for the dungeons and towns.  In fact, they were so good that Phantasy Star IV later incorporated remixes of them into some of its own dungeons.

Beyond its presentation, however, Phantasy Star is very emblematic of its era.  The game has a pretty heavy focus on gathering clues by talking to townspeople in order to solve puzzles and bypass obstacles, and they're not always the most intuitive of puzzles.  One example is finding the Compass, which requires the player to talk to a random villager in one town, then backtrack to the first town and enter its mini-dungeon to find a chest containing it.  The chest will not be there when the player visits before talking to that townsperson, which can easily cause some confusion.  Another example is trying to acquire the Passport, which requires asking a shopkeeper about "Secrets" three times; the first two times, he will simply send you away, but the third time he will relent and sell it to you.

The game, as with most others of the era, is also fairly grindy, with the player often having to stop and farm gold from random encounters in order to purchase new equipment and have a fighting chance in the upcoming dungeons.  At other times, they will simply need to purchase a specific item in order to be able to enter new areas at all, such as having to save up a substantial amount of money for an Ice Digger in order to get around Planet Dezolis.  Still, this doesn't end up being too bad in comparison to some RPGs; the brisk pace of combat helps the player get through it faster, and item prices generally aren't too outlandish, meaning that the player can get much of their gold-farming done in a matter of minutes rather than hours.

The game's combat is also fairly straightforward, with most enemies having only one or two types of attack for the player to deal with.  Much of the danger involved therein comes from "beef-gating" - wandering off the path to the intended next area and encountering enemies well above the party's level, which can quickly cause them to be wiped out.  Thankfully, the game also lets the player save at any time, so as long as they remain diligent, this isn't a huge problem.  The encounter rate also generally isn't bad - there are only a few instances I can recall of enemies attacking me every other step or so, and even those were generally in dungeons.  However, enemy groups can sometimes be massive onslaughts of 5-8 enemies, which can be extremely dangerous to an underprepared party and quickly deplete their resources, forcing an early retreat back to town in order to heal up.

As was standard for RPGs of the era, the overall narrative in the game is fairly minimal, without much in the way of defined characters or an ongoing narrative.  The playable characters also neatly fit into the usual RPG archetypes - Alis is a bit of a jack-of-all-trades, Myau is more of a support character (being able to boost allies' defense, disarm traps and having the best healing spell), Odin is pure muscle (and the only character who can wield guns) and Noah is the mage character, being relatively weak physically but getting the strongest offensive spells.  Still, its quirky science fantasy setting lends it some charm, and it did provide an important building block for later games in the genre, which had much more of a focus on story and atmosphere as the technology allowed for it.

In the end, Phantasy Star is a game emblematic of its era in many ways, but its strong aesthetics and overall level of polish help it stand out from other contemporary titles.  It provides enough content to give the player a satisfying adventure, but it also proves concise enough that it doesn't wear out its welcome.  The first in a classic RPG series that endures surprisingly well today. 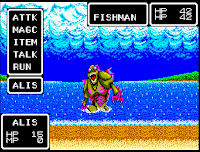 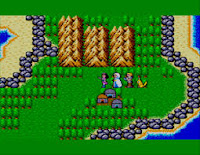 Developer: Sega
Publisher: Sega
Platform: Sega Master System, Game Boy Advance, Wii Virtual Console
Released: 1988
Recommended version: As all of the later versions are direct ports of the same game, you can't really go wrong with most of them.  However, I would avoid the Game Boy Advance port, as it has a rather annoying bug that can cause the game to lock up during the save process, forcing the system to be reset and causing the player to lose all of their progress since their last save.  The Sonic's Ultimate Genesis Collection compilation for Xbox 360 and Playstation 3 also contains ports of all four Phantasy Star games, making it an ideal and affordable choice for modern gamers.  The Switch version by M2 (part of the Sega Ages line) also includes enhancements like a minimap and an enhanced mode that supports FM Synth emulation.