Zelda II: The Adventure of Link

Zelda II was the first major change-up for the Zelda franchise, and it remains a controversial entry among fans even to this day.  But is there some worth to be found in its unique take, or is it simply too different and flawed to provide an enjoyable experience? 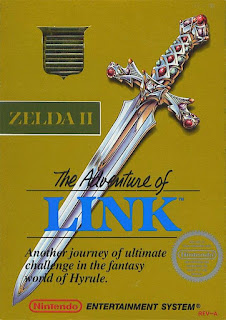 There is no doubt among long-time gamers that the original Legend of Zelda is a masterpiece; it provided a unique, fast-paced, fun and nonlinear experience, giving the player free roam of a vast world and a plethora of unique puzzles and challenges to overcome as they sought to recover the eight Triforce pieces, enter the final dungeon and defeat Ganon.  It had a somewhat unpolished translation, but the strength of its gameplay and its popularity among fans made it an institution nevertheless, and the fact that there was a more challenging second quest available after the first was completed it some considerable replay value as well.

Its sequel, however, was met with more mixed opinions, as it radically changed up the format of the game; rather than an overhead adventure with free-roaming, Zelda II was much more linear, with gameplay reworked to resemble a combination of Dragon Quest and Castlevania II.  The game still had an overhead perspective, but only on the world map - the majority of the game's action took part in a 2D side-scrolling view, working in elements of platforming and requiring the player to quickly react to enemy movements in order to block high and low attacks and sneak in hits of their own during brief moments of vulnerability in an enemy's guard.  This does also make the dungeons somewhat more difficult to navigate, as the player is no longer provided with a mini-map, and the lengthy mazes of corridors and elevators do tend to look very samey.

The game's overall feel is much more "RPG-ish", too; while there is still something of an emphasis on finding items in order to power up or enable access to new areas, character growth in Zelda II is now mainly reliant on an experience system.  Enemies now give varying amounts of experience points when defeated, and when certain amounts are reached, the player is given the option to power up one of three key stats - Life (which lets them take more damage), Attack (which lets them deal more damage) or Magic (which grants them more MP to cast spells).  The experience counter at the top of the screen counts down the required experience for the next level available, but the player has the option to cancel the next upgrade on their queue and store their experience for a later one.  This proves to be a useful strategy early on - magic becomes important later in the game, but in the early stages the player is better served by having more health and attack power instead, so it is worth skipping magic upgrades in favor of those until about the second half of the adventure.

The magic system was another major change-up for the series; though spells and magical items would later become the norm in many Zelda games, this was the first title to utilize them.  They also have a much wider variety of applications here - some merely provide useful benefits in combat (such as reducing the damage one takes or restoring some lost health) while others are required to complete the game.  One example of the latter is the Reflect spell, which allows Link's shield to reflect the spell beams of the Wizzrobe enemies back at them to damage them; this is required for one boss battle, as it is the only way to damage that boss.  Others include the Jump spell (doubles Link's jump height for the current screen - necessary to bypass some obstacles), the Fairy spell (required to fly over large gaps) and the Thunder spell (which deals heavy damage to all on-screen enemies).  While the player can defeat enemies to gain powerups that restore their MP, they must still manage their magic carefully, lest they encounter an area where a spell is required and not have enough magic left to cast it.  Another thing to note is that, despite adding in many RPG elements, Zelda II is ironically the only game in the series without any kind of currency or shop system implemented; everything you need is found via solving a puzzle or defeating enemies.

Zelda II is certainly a different experience, but that in and of itself wouldn't have made it such a controversial game; after all, if it maintained the same level of polish and challenge as its predecessor, there wouldn't have been much to complain about.  However, the game suffers a bit in this regard.  The difficulty is very uneven at times, with the most infamous example probably being Death Mountain.  The first two areas of the game and their respective dungeons are relatively straightforward and simple, but once those are completed, the player's next task is to navigate Death Mountain - a convoluted maze with much tougher enemies than any they've yet encountered.  One can easily get stuck there for hours or days on a first playthrough; figuring out the correct path to navigate the maze is one thing, but surviving the waves of brutal enemies long enough to actually make it through is another matter entirely.

The platforming in the game also has some annoying elements.  Later in the adventure, enemies that wait just offscreen for the player to approach so they can knock them into a pit become more commonplace, which feels a bit unfair and can quickly get frustrating,  This element even comes into play in a boss fight or two, particularly the fight with Barba, which requires the player to make tricky jumps near lava pits to land hits on his head (and misjudged jumps usually result in a death).

Finally, the game's more action-oriented format, while it lends itself to a more frantic style of combat, also brings a few frustrations of its own.  One can adapt to having to quickly block and counter enemy attacks in one-on-one combat, but when multiple enemies appear and begin attacking the player at the same time, they can quickly juggle Link back and forth, depleting his health bar and giving the player no real means of escape.  This also isn't helped by the fact that the game operates on a lives system, and once the player loses their last life, they are sent back to the starting point of the entire game and lose any unspent experience points they've built up.  Which can mean a lot of backtracking all the way across the game world to where you died just to get another shot at it, and losing any progress you've gained toward a level that could help you overcome that challenge certainly doesn't help either.

In the end, Zelda II is one of the franchise's most divisive games, and for good reason; its attempts to innovate and change up its gameplay style resulted in an experience very unlike the first, requiring many players to put aside everything they knew about Zelda and adapt to an entirely new style of gameplay.  Still, the overall experience is still a well-polished and enjoyable one for the most part, and if one gives it a chance, they will see that Zelda II has just as much to offer as any other game in the series. 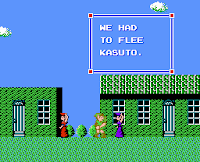 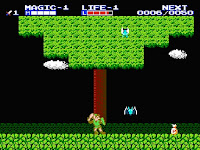 Developer: Nintendo
Publisher: Nintendo
Platform: Famicom Disk System, NES, Gamecube, Game Boy Advance, Wii Virtual Console, Wii U Virtual Console
Released: 1988
Recommended version:  All of the later versions are ports of the same game, though the later releases for the Gamecube and Wii/Wii U have some slight alterations to the text and take steps to mitigate the flashing death screens in order to reduce the chance of epileptic seizures.  If that's a factor for you, pick up one of the later versions; otherwise, any of them will do.  The original FDS release is also worth checking out for the fact that it has some significant differences from the international releases, particularly in its sound design.