Black Sigil: Blade of the Exiled

Black Sigil makes no secret of what it is - a game very much inspired by numerous 16-bit RPGs, especially those of the Super Nintendo era and Squaresoft's offerings in particular.  But does this 2009 RPG stand on its own, or is it simply another forgettable "homage" game with nothing to distinguish itself? 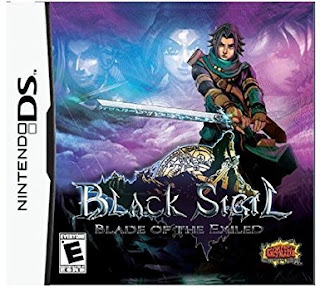 Developed by small studio Graffiti Entertainment (mostly known for producing low-tier PC titles) and published by Studio Archcraft (known for publishing... well, Black Sigil: Blade of the Exiled), Black Sigil is both companies' first attempt at a proper Japanese-style RPG on a mainstream gaming platform.  But while Black Sigil is a competent game in most respects, it also has a major problem that many "homage games" fail to recognize - that simply duplicating the aesthetics, format and gameplay of what came before will not make your new game an instant hit.

Case in point, Black Sigil makes a strong first impression with its sprite work, which perfectly captures the style of RPGs from the 16-bit era, almost to a fault.  The main character's sprites look very similar to that of Chrono Trigger's (particularly his running animation), and many of the background elements look like they came straight from later 16-bit Square RPGs.  It all looks good and honestly ends up being the game's strongest suit, even if it feels borderline plagiaristic at times.

The music and sound design, on the other hand, feels very bare-bones and basic.  While none of it is particularly annoying, there's really nothing to distinguish it either; tunes are simply adequate for conveying something of a mood for their particular area or, at worst, just providing something for the player to listen to other than dead silence.  Sound effects are equally bland, seemingly just there to provide sound effects for a given attack or action and nothing more.

Far less desirable, however, are some of the other ill-regarded elements of the era that quickly creep into the experience.  Much of the NPC dialog in the game is either generic or outright annoying, constantly trying to get cheap laughs and undermining any sense of drama the central narrative is hoping to build up.  The game is heavily centered on tedious grinding, with even basic equipment requiring several dozen battles to save up enough money to afford (which also isn't helped by the dragging pace of the combat system).  Dungeon design encapsulates the laziest elements of the period, with dungeons simply being lengthy corridors and every dead end the player encounters leading to a treasure chest.  The pacing in the game is also quite bad; combat drags even at the fastest settings and all-too-frequent random encounters make getting almost anywhere a drudgerous affair.

Combat in the game attempts to incorporate elements of RPGs of the era as well, doing so with at least some success.  The games it most closely resembles are the Lunar series on the Sega CD, with most characters being forced to physically approach enemies before they can attack with their weapons.  Spells and skills have areas of effect as well, targeting either a single enemy, a radius that can hit multiple enemies in close proximity to one another, or all monsters on the field, and knowing when to use which proves to be a key part of the strategy, at least in theory.  In practice, however, Black Sigil lacks any of the polish or challenge that made Lunar's combat so memorable.  I won almost every fight by simply spamming the Attack command because my normal attack generally defeated any enemy I encountered in a single hit.  And if it didn't, a simple weapon upgrade was all it took to get me to that point.

The game also just feels very utilitarian as a whole, with far more thought put into providing a lengthy experience rather than one meant to captivate the player and keep them interested in seeing what will happen next.  Generic "kill the boss monster" quests are commonplace, and when paired with the aforementioned slow combat and grinding, this simply makes the entire Black Sigil experience feel very by-the-numbers and uninspired, as if the developers were only interested in providing thirty-plus hours of gameplay for the sake of it, rather than making those thirty hours memorable or fun in the slightest.

In the end, Black Sigil is a game painted up to look like several beloved classic RPGs while making virtually no attempt to distinguish itself from them, even replicating elements that are now largely viewed as outdated and flawed just to push home that image.  It completely fails to recognize that a large part of what made games like Final Fantasy and Phantasy Star and Chrono Trigger such outstanding achievements for their era was not simply their aesthetics and gameplay, but the fact that they had innovated to get to where they were.  They stepped away from the heavy grind and minimalistic aesthetics of their forebears and delivered a more fast-paced, movie-like experience with captivating characters, thought-provoking narratives, creative worlds to explore, and aesthetics and gameplay engineered to match that feel in every respect.  But more importantly, they pushed limits to deliver visuals and music previously thought impossible on their hardware and used ingenious twists on old mechanics to make the gameplay feel fresh and new, yet familiar enough to appeal to long-time fans.  Until more indie developers recognize that and take their own steps to break away from the norm, we're sure to get a lot more of these generic "homage" games that are destined to be just as quickly forgotten as Black Sigil was.