Ultima IV: Quest of the Avatar

The Ultima franchise is a beloved classic among die-hard CRPG fans, and among them, Ultima IV is said to be among its best entries as well as one of the greatest RPGs ever made.  But does this legendary title still shine today, or is it just too dated to retain its spark? 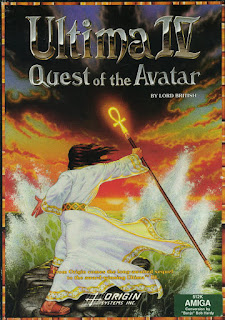 The Ultima series began as a series of relatively simple adventures following an archetypal format - venture around the land, complete quests to collect necessary items and upgrade equipment, and eventually confront and defeat the big boss to win the game.  However, they also forced the player to take part in some rather questionable activities - having to break into a jail to acquire a necessary item, or kill characters to get keys, or simply steal money and food to survive with no lasting consequences, which drew some controversy and complaints from the parents of young gamers.

In response to this, Ultima IV's took on a much different design approach - one that would set the player on a quest to become the Avatar of Virtues and stand as a shining example to the population of Britannia.  To that end, the player is now tasked with following the eight virtues - Honesty by telling the truth and not cheating people, Humility by refusing to speak proudly, Valor by fighting battles to the end and not starting fights themselves, and so on.  In fact, the player is given a rather strict series of guidelines to follow if they wish to solve all of the game's puzzles and complete the game, listed below:

Valor - Refusing to flee from battle (even if it means one's death) and letting non-evil opponents flee.

Honesty - Telling the truth when prompted, including not cheating the blind Reagent dealers in towns.

Honor - As well as not being deceptive (see Honesty), this also ties into completing the game's many quests - finding important items or earning an eighth of the Avatarhood will count toward it.

Sacrifice - The player or one of his companions dying in battle will raise it slightly, but the most prominent way to boost it is to donate blood at a healer (which will cost the player 100 Hit Points each time).

Spirituality - Mastering the eight virtues requires finding their respective Runes, discovering the correct Mantra, and meditating at their respective shrines for a number of cycles (which grants clues and, if that Virtue is high enough, an eighth of the Avatarhood).  Doing the process correctly for each Virtue will raise it; making mistakes will lower it.

Humility - The player must make efforts to avoid "speaking proudly" - not boasting that they are the best at anything, and even enduring insults from NPCs will generally boost it.

Fitting this theme, the player is also given a choice of classes to play as that match each Virtue, depending upon their choices during the opening dialog.  While this provides for a pretty interesting role-playing experience right out of the gate, it does also lend itself to some abuse; some classes are clearly better than others, so one can simply pick the virtue they want and get the "best" class to power through the game with.  For example, the Mage gets the most HP of any character, as well as being able to wield the game's strongest ranged weapon, while the Shepherd, befitting Humility, is only allowed the most basic of equipment and can cast no spells at all.

Even after having mastered all eight virtues, however, the game isn't over: the player's quest ultimately entails entering the Stygian Abyss and recovering the Codex of Ultimate Wisdom, which is a lengthy and involved journey in itself.  To this end, the player must find the eight Virtue Stones, enter the game's many dungeons, and solve the puzzles therein to collect the components of a three-part key needed to enter the final challenge.  Each of these items is a trial in itself, and discerning their locations can require a lot of detective work, talking to numerous townspeople on the subjects and cross-referencing what they say with the words of other NPCs throughout the game world.  And given the sheer volume of dialog and NPCs Ultima IV provides, it is definitely a game that requires the player to have either an exceptionally good memory or a notebook handy.

As per the standards of the era, the game can also get exceptionally difficult at times, simply requiring the player to persevere through sheer luck rather than any degree of skill.  Probably the most famous example of this is the ship brigade guarding the Isle of the Avatar and the entrance to the Stygian Abyss; the player must simply force their way through, enduring heavy fire and likely losing their ship to cannonfire (and killing their entire party) numerous times before they finally get a lucky setup that they can force through.  There is a magic ship wheel that can restore their ship's HP beyond its maximum, but this only helps to an extent - more likely, the player will instead be forced to close the gap (under heavy fire) and hop from ship to ship, hoping all the while that the barrage of attacks they sustain won't deal too much damage to their party before they can get in.  Combat in the game is downright unfair in places, with occasional hordes of enemies that can put the entire party to sleep, granting them several free hits on the player that they're helpless to resist, as well as hazards like lava traps or hidden switches that can unleash hordes of dangerous foes on the party.  Thankfully there are no permanent deaths in Ultima IV and the player can save their game at any time, which helps to mitigate some of the frustration the player encounters.

Another element that may discourage some is the era in which the game was released; being an 80s computer game, it suffers a bit from its interface (mapping a different function to each letter on the keyboard) and its somewhat primitive EGA visuals and PC Speaker sounds.  Those who weren't born into the era may take some time to adapt, but the overall intuitive choices for letters (K to Klimb a ladder, D to Descend a latter, C to Cast spells, etc.) does help, and over time the controls will become second nature.  There are also fan patches that polish up the visuals to more modern standards and add some proper music to the game, which may help younger gamers get into the experience.

At the end of the day, Ultima IV continues to shine among 80's RPGs for the sheer scope of its design and the innovations therein, giving the player a much loftier goal to achieve than simply defeating some great evil and having to navigate a vast and thick web of NPCs, dialog and clues in order to achieve it.  While Ultima IV's gameplay isn't the most polished, it provides plenty of longevity, intrigue and challenge even today, and the sense of accomplishment for finally navigating all of its trials and seeing the ending is exquisite.  The current of HD visuals, dense and realistic world design and full voice acting for a cast of thousands owes much of what it is to Ultima IV, which proved that role-plyaing video games could provide a legitimate role-playing experience, rather than a simple monster-bopping simulators.  A must-play experience for any fan of the genre, especially as the game is available as freeware.

Developer: Origin Systems
Publisher: Origin Systems
Platform: Amiga, Apple II, Atari 800, Atari ST, Commodore 64, DOS, FM Towns, MSX2, PC-88, PC-98, X68000, X1, FM-7, NES, Sega Master System
Released: 1985-1990
Recommended version: All of the versions are relatively similar, though the one that underwent the heaviest alterations is the NES port, which simplifies the interface and changes up the gameplay and visual style to more closely resemble a console RPG in the vein of Dragon Quest or Final Fantasy.  The Sega Master System also features an overhead view for the dungeons, rather than the first-person view present in most versions.  However, the most easily accessible port of the game today is the DOS version, available in a pre-configured installation package through GOG at no charge.