One of the more overlooked Square games from the Playstation 1 era, as well as the first Saga game to get a stateside release in over five years.  But is this title a hidden gem, or should it be left in the bargain bins to collect dust? 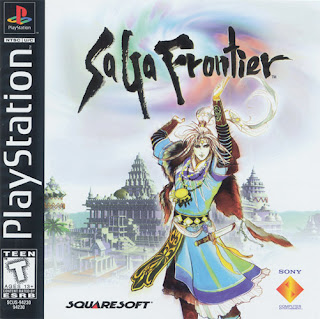 SaGa was always Square's more experimental series, taking many cues from western RPGs with its open-ended gameplay, randomized elements and highly customizable characters, yet retaining the strange, fantastic worlds and monsters of Japanese RPGs as well.  The franchise has gone in many directions over its lifespan, starting as a somewhat traditional JRPG before branching into a time travel story where changing events in the past affects the future (before Chrono Trigger, no less), a turn-based war simulation and even a tabletop RPG.  SaGa Frontier is perhaps the franchise's most well-known game in the west, as well as one of its most divisive - in an era where JRPGs were aiming to provide a more grandiose, movie-like experience, SaGa Frontier aimed for somewhat lower stakes, mostly retaining the low-key aesthetic of a traditional 16-bit RPG and going for more of an anthology format by telling seven shorter stories rather than centering on one gigantic, world-spanning adventure.  Each story is told independently of the others, though all are set in the same universe and characters frequently recur throughout each quest and the events of other characters' quests are never acknowledged within a given storyline.  In brief, they are:

The character types available in the game are highly reminiscent of the earliest SaGa games, with human characters being the most adaptable and versatile class (though taking the longest to build up), Mystics taking the place of Mutants as spellcasters, Mecs as the mechanical tanks who derive all of their stats from the equipment they wield, and Monsters as the most malleable characters, absorbing the abilities (and occasionally the physical forms) of other monsters the player defeats.

Perhaps in response to complaints about the overall difficulty and random nature of the earlier games, though, the mechanics have changed up significantly.  Weapons no longer break after a set number of uses (though guns can run out of ammunition during a fight) and the player is given more control over what spells and abilities their Mystics and Monsters gain and lose; rather than having it happen at complete random, monster abilities are added to an ability list that the player can customize (with the last slot on the list being overwritten when a monster changes form) and Mystics operate much differently than their Mutant counterparts, absorbing monsters into their exclusive "Mystic equipment" and retaining some of their stats and abilities until they get overwritten with another monster at the player's discretion.

All of these things greatly cut down on the "adapt to arbitrary changeups" style of gameplay of SaGa's earliest titles, as well as contribute in various ways to the new combo system, whereby several teammates can coordinate their attacks for extra damage.  There are many different attacks that can be combined together (so much so that, as far as I know, nobody's bothered to document them all), and discovering which of your characters' attacks sync up is a significant part of the fun of the game.  In fact, mastering this system even proves to be mandatory during Riki's quest, with one boss battle requiring you to earn ten "points" by creating combos involving at least three characters before a set number of turns have passed.

In addition to nearly free-form character growth, the game also features largely open-ended gameplay.  While there are set missions for each character to complete in pursuit of their particular storylines, the player is free to explore at their leisure at any time in between them, visiting the various worlds and embarking on a plethora of sidequests to power up.  Many areas that play into the story of one character's quest simply serve as explorable side-areas in others, and nearly all of them can be freely visited at any time, whether the player simply wishes to travel there or goes there as part of a larger sidequest.  This works in the game's favor overall, especially since some of the main storylines are quite short and have severe difficulty spikes from mission to mission, so having chances to roam freely and level up at one's leisure is all but essential to completing each story.

Uneven difficulty aside, the game shows many other signs of being rushed - there are numerous elements in the game with no apparent purpose, as well as several prominent areas that don't tie into any character's stories, leaving them as simply curious oddities for the player to experience (with the most famous being Shrike's Bio Lab, originally intended for Asellus's story).  Some quests are also relatively haphazard in layout, with Asellus' quest in particular forcing the player to wander randomly until they find a new boss character to fight, Lute's simply consisting of wandering around until you find and talk to a specific NPC to embark upon the main plot, and Blue's quest coming to an abrupt stop once the story starts to pick up, not even giving the player the courtesy of a proper ending sequence (the screen simply fades to black-and-white and "THE END" appears once the final blow is delivered to the big boss).  There is also evidence that an eighth scenario was planned - one featuring the policeman Fuse (who is recruitable in every character's story but plays little role in any of them plotwise).  Still, this does lend itself to the game's overall charm in a strange way, adding a sense of mystery to exploring the bizarre world of SaGa Frontier and leaving the player wondering what role its disjointed elements ultimately would have played had the developers been given the chance to fully flesh the game out.

Artistically, SaGa Frontier's style is very emblematic of the Playstation 1 hardware, utilizing colorful prerendered backgrounds for its environments and 2D sprites for its characters, though many of said sprites are adapted from low-detail 3D models, lending them a somewhat odd, plasticy appearance.  Further contrasting this, many of the spell and attack effects in the game utilize 3D effects, adding to the flash and flair of combat.  These elements all feel a bit disparate from one another, but I honestly think that works alongside the theme of the game as a whole, combining elements of numerous genres and styles together into something strange and quirky that by all measures shouldn't work, but ends up being a lot of fun to explore and get immersed in.  The overall lack of 3D elements also lends itself well to the gameplay, allowing for minimal load times and keeping combat consistently crisp and fast-paced rather than being dragged down in overlong attack animations.  So while Saga Frontier may not be the most visually advanced game of its era, it's one of the better-playing RPGs on the system even today.

In short, SaGa Frontier is  representative of the Playstation 1 and that era of Square products as a whole - rough, unpolished, yet highly ambitious and experimental.  I think this is actually one of their better outings from that period as well, emphasizing Square's strongest suits - namely, their inventive gameplay and imaginative game worlds - and also perfectly encapsulating the quirky and surreal style of many SaGa titles.  So while it may be an unfinished product they stamped on a disc and shipped out for the same price as one of their big-name blockbusters, it's such a unique experience that it's still worth at least a look for any serious RPG fan. 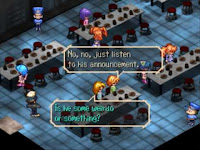 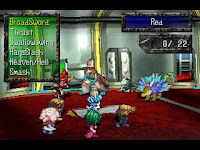 Developer: Squaresoft
Publisher: Squaresoft
Platform: Playstation 1, Android iOS, PC, Switch, Playstation 4
Released: 1998, 2021
Recommended version: I do have a fondness for the original PS1 release, but the 2021 remaster is definitely the version to play these days.  Not only does it retain all the fun quirks of the original like the Takonomics trick, but it offers a vastly improved UI, a single-command quicksave, many more save slots, restores much of the cut content and even polishes up a lot of the item and enemy names to be less Engrishy.  There is even a New Game Plus option that lets you carry over your inventory and trained-up characters' stats between quests, which cuts down on grinding.