A popular JRPG franchise finally gets released to a wider audience.  But is it one worth checking out, or should this game - and this series  - have been left in Japan? 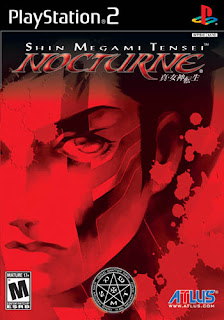 Shin Megami Tensei is a name synonymous with JRPGs in Japan, existing since the Famicom days and continuing on with a plethora of off-shoots, sequels, spinoffs and remakes to the present day.  It was less well-known in the west, however, due to its controversial and heavily religious themes barring it from being released there for many years.  But as RPGs (and games in general) became more adult-oriented, it was eventually brought to the west, with its earliest titles (part of the spinoff Persona series) largely flying under the radar of RPG fans at launch.  However, they did pick up a cult following, eventually resulting in the first release of the main series in the Playstation 2 era: Shin Megami Tensei III: Nocturne Maniacs.  The roman numeral and "Maniacs" suffix were dropped from the title, but the rest was kept in sync with the updated Japanese rerelease, featuring a plethora of gameplay tweaks, a new dungeon, a new ending, and of course Dante from Capcom's Devil May Cry franchise in a cameo appearance, both as a recurring boss and as a playable character.

For those unaware, the franchise as a whole is built on the concept of recruiting enemies to one's party through a dialog system, appealing to their natures and philosophies (and often simple bribery) in order to convince them to join your side.  This quickly becomes an essential tactic to survival, as your human characters are relatively weak and vulnerable on their own while enemy forces tend to be numerous and extremely dangerous besides.  There is a caveat, however - while your human characters can level up and customize their equipment to adapt to new challenges, demons' stats are fixed, requiring you to constantly refresh your ranks and fuse your existing demons into newer, more powerful forms in order to keep pace with the enemy.

Nocturne changes the formula up slightly by only giving you command of a single human character with variable abilities, but also allows your demons to be customized to a point - fused demons can inherit skills from their predecessors, and demons as a whole can now level up in battle in order to bolster their statistics and learn new skills.  Some can even evolve to new forms one they reach a sufficient level, allowing them to retain some of their old skills while gaining a new set of strengths, weaknesses and abilities to utilize.  That said, demons do level up much more slowly than your main character and their elemental properties are relatively fixed, so changing up your party to accomodate new challenges is still very much an integral part of the gameplay.

Another change-up is that the game largely exhumes equipment for your main character, so buying armor and weapons is now a thing of the past.  However, there is a new mechanic that compensates for this; namely the Magatama mechanic.  By equipping new magatamas, your character's stats are altered slightly, they gain new sets of resistances and weaknesses to elementals, and when they level up, they will learn a skill from a list on that particular Magatama until it is exhausted.  This allows your main character to have a much higher degree of customization in comparison to earlier games; a stark contrast to the earlier games, where your main character could only utilize the COMP to summon demons from your stock and could not cast any magic whatsoever.  However, this comes at a price: being all but forced to have at least one elemental weakness at any given time means that enemies can (and will) often deal great amounts of damage, devastating status effects or even instant death to your protagonist, and should he die at any point, it's an immediate game over - your remaining demons cannot simply haul him to a healing spring and revive him to continue the game.  This makes combat a lot more tense, as well as forcing the player to endure many deaths in order to learn exactly what dangers they'll face in a given area and what to equip and learn to counteract them.

Combat also has a new feature in the form of the Press Turn system, which can turn even battles with mundane enemies into a desperate struggle for survival.  In short, each character in your party gets one "turn" per round, and depending upon whether they hit, miss or have their attack blocked, will affect the number of actions the rest of your party can take that round.  Hitting an enemy's elemental weakness will add one turn, having an attack miss or be blocked will subtract one turn, and having an attack be absorbed or reflected will cause you to lose all of your remaining turns.  In essence, this only further emphasizes knowing one's opponents and their elemental weaknesses well, as having an attack be absorbed or reflected will not only put you in a worse spot by healing your opponent or damaging your party, but will cause you to lose turns, giving your opponents a significant advantage.  Enemies are also bound by these limitations, however, and you can easily turn the tide in your favor by coming prepared with demons who absorb, reflect or nullify their attacks.  However, bosses in the game tend to have few (or no) weaknesses and a variety of status effects and elemental spells to use, so this system ends up being mostly a liability there - you not only have to make sure your protagonist is well-guarded against the enemy's attacks, but your entire team must be as well.

Of course, having deep and challenging gameplay is one thing, but being an RPG, it all comes to naught if the game doesn't also have a compelling narrative and an interesting storyline to hold the player's interest through all the frustration.  Luckily, Shin Megami Tensei is also a series that prides itself on its narrative, bringing plenty of grim atmosphere and compelling characters to the table.  Nocturne is no different, telling the story of a world brought into a strange, demon-infested state by an event called the "Conception", where several factions now vie for supremacy in order to recreate the world in their own image.  Unlike the earlier games, however, which simply had forces of Order, Chaos and neutrality duking it out, there are now five Reasons vying for power, and the player is free to ally with any of them at their leisure or even none of them.  In brief, they are:

As per the earlier games, one's choice in paths affects which ending the player receives and also affects the turn the story takes, allowing them to skip some boss encounters while being forced to endure others.  The demons the player can recruit are also affected, with demons of opposing philosophies generally refusing to assist them.  Though in an ironic twist, many of the more iconic "demonic" demons now ally themselves with Shijima (the "law" path) and numerous angelic types ally with "Yosuga", the path closest to Chaos.

Also aiding the compelling narrative is a fresh new style for the series.  While the earlier Shin Megami Tensei games felt a bit low-budget with their minimal animation and first-person grid-based dungeons, Nocturne takes things fully into the Playstation 2 era, with the action now viewed from a third person perspective and detailed, well-animated characters to push the plot scenes into something truly cinematic.  The distinct visual style, ambient sounds, vivid colors and lighting effects in these scenes give the game a haunting, dreamlike atmosphere that only adds to its grim themes.


In the end, the third outing in the main Shin Megami Tensei series continues in the tradition of its predecessors, pulling no punches in providing an experience for the die-hard RPG gamer.  With its strong narrative, difficult gameplay that requires a significant investment to learn all of its intricacies, and plenty of replay value thanks to its highly customizable characters and multiple endings, Nocturne is a game that demands much of the player, but is very rewarding if they're willing to provide it.

Developer: Atlus
Publisher: Atlus
Platform: Playstation 2, Playstation 4, PC, Switch
Released: 2004, 2021
Recommended version: The Playstation 2 version is a personal favorite; however, the HD remaster of the game from 2021 is also quite good, upscaling the game to 1080p, rewriting some of the dialog and adding voiceover.  This version also has an easier difficulty available as optional DLC.  However, Dante is excluded from this version in favor of Raidou Kuzunoha (who fills essentially the same story role) unless you shell out for the $10 "Maniax Pack" DLC.