Is the fourth entry in Nippon Ichi's flaghship franchise worth a look, or has the series just grown stale? 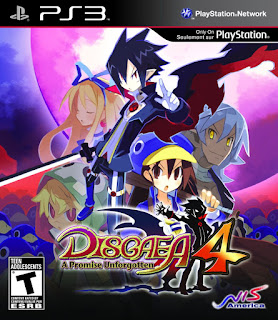 The original Disgaea was a fresh take on the turn-based strategy RPG genre, featuring a largely irreverent storyline and atmosphere as well as having more puzzle-based gameplay than most strategy RPGs; rather than simply eliminating all the enemies on the board, the game would throw in curveballs like panels that would strengthen enemies, cause constant damage to the player each turn they stayed on them, serve as barriers that could only be bypassed by destroying guarded Geo Blocks, or even grant complete invincibility to units, among other effects.  This culminated in a game that effectively de-emphasized sheer power-leveling for casual playthroughs, yet simultaneously had more of it than perhaps any other RPG to that point for the more hard-core players - the maximum attainable level in the game was 9,999, and one could reset their level to 1 and level up all over again to attain even greater stats and become phenomenally powerful, which proved to be a necessary task to overcome and defeat the uber-bosses present in the post-game bonus levels.  Weapons and equipment were also equally customizable, with the rarest variants being able to hold up to eight "residents", defeated enemies that would bolster an item's stats when they were confined to it.  In short, it was a game that effectively appealed both to both more casual RPG fans with its sly writing and amusing characters, and the most die-hard of the bunch with the extremely nuanced and involved mechanics that became essential to master the post-game.

For these reasons and more, Disgaea proved to be a surprise hit despite slow initial sales and having graphics that would be more at home on the previous console generation.  Naturally, it was no surprise that a sequel would follow a few years later, possessing visuals more suited to a Playstation 2 release and expanding on its gameplay while retaining the same overall feel and charm.  A third game later followed on the Playstation 3 which, like the first game, trailed behind the current generation visually but kept much of the feel of the series.  Then in 2011 we got Disgaea 4, a game which, like Disgaea 2 before it, pushed the series into the current era with updated visuals and considerably more polish.

Not too much has changed overall on the gameplay front; Disgaea 4 still utilizes the same blend of turn-based gameplay and puzzle-solving as its predecessors.  Disgaea 3's Magichange feature also returns here, allowing monster units to turn into temporary weapons for human characters to wield and granting them new, powerful special attacks.  However, the amount of work involved to make this a viable strategy is still a significant one; losing a unit in exchange for one or two extra turns of damage generally isn't a good tradeoff unless it's a very significant boost, which usually won't be the case until a significant amount of post-game grinding and stat optimizing has been done.

Once it has, though, a few other fun features come into play in the game.  Creating giant monsters is now an option, causing two smaller monster units to fuse into one larger one with a significantly larger footprint on the battlefield, but also increased damage output and range.  They also gain the ability to displace smaller units simply by walking into them, which can clear a path for your smaller units to advance.  Giant monsters can also Magichange with human units once specific conditions are met, allowing human characters to wield a giant version of that weapon complete with all the derived stats of the giant monster, which is both awesome and hilarious.

Dual Magichange is also an option, allowing a player to wield two Magichanged weapons simultaneously, complete with all the pluses and minuses that description entails - losing two units, but gaining the stats and abilities of both for a temporary boost.  The major downside to this, however, is that the second weapon's statistics will overwrite those of the first accessory item the character has equipped, so careful management is required to get the most out of it.

The extended gameplay comes at a cost, however.  Maps in Disgaea 4 tend to be absolutely enormous, causing fights to drag on for upwards of thirty minutes at times.  When one of Disgaea's strong suits was its faster-paced gameplay in comparison to most turn-based strategy RPGs, this is a rather baffling turn for the series to take.  Furthermore, while the game offers more content, it also exponentially improves the amount of grinding required to take advantage of said content and fully complete the game - as in Disgaea 3, substantial amounts of micromanagement and save-scumming are required to get the maximum benefit from weapons, and unlocking the post-game Land of Carnage is also a major timesink, requiring collecting rare items from randomized dungeons that have a relatively small chance of appearing on any given visit.  Visits from redundant enemy groups are frequent and collecting key items is reliant on entering rooms that appear at complete random.  While a significant random element is par for the course of Disgaea games, here it really feels like Nippon Ichi was more interested in artificially lengthening the game, simply adding more steps to existing mechanics in order to keep people playing the game longer.  Which is fine for die-hard fans, but for gamers who tend to get bored with long stretches of repetition and little payoff, may be a turn-off.

Even on the more casual front, though, Disgaea 4 also does not highlight the series at its best; as mentioned, the over-long maps can start to wear on the player's patience.  But more significant than that is the game's storyline, which overall feels like a less interesting retread of earlier games in the franchise.  The storyline is a less-interesting copy of the latter half of the first Disgaea, with an evil force of humans causing invading the Netherworld and the protagonist vowing to stop them.  The characters are equally generic, rarely ascending beyond their archetypes, and the few that do just feel like less-interesting retreads of earlier characters in the series (Valvatorez and Artina in particular feeling like a more boring version of Adell and Rozalin).  A rather strange turn for the series to take, particularly when Nippon Ichi as a whole prides their games on their colorful characters and sharp, self-aware sense of humor.

The over-prevalence of downloadable content in the series also continues to be a problem, which has the unpleasant effect of making the series - and this game in particular - feel less like a determined effort by its developers and more like a cynical cash grab.  Large amounts of playable characters (including many favorites from earlier NIS games), new story campaigns, new modes that grant easier access to useful items, and so on, all sold for a few bucks apiece (and totalling more than the cost of a new copy of the game in all) just feels like a sleazy way to milk players for more money, especially since die-hard Disgaea players tend to be the completionist type and said extras usually have trophies tied to them, requiring you to buy most (if not all) of it to get a 100% completion rate.

All in all, Disgaea has always a lot to see and do, but as the years have gone on, it feels like a lot of the passion has been drained from the franchise and it now just aims to be a voluminous time sink rather than a true labor of love.  Disgaea 4 is no different, offering up a rote sequel in every respect that proves just good enough to appease die-hard series fans.  For the less Disgaea-invested gamer, though, this is one you can safely skip.