An experimental outing headed by one of the designers of XCOM 2, Chimera Squad could be considered a cross between XCOM-styled tactical gameplay and a little bit of room-breaching action a la the SWAT series.  Indeed, a major mechanic in the game is positioning your team at various breach points and attacking foes all in one swift action, gaining bonuses if you enter through unexpected means (blowing up a wall, entering through a vent) or facing potential penalties if you just come in through a door or window.  In addition, enemy and ally turns are now interleaved between one another rather than being broken up by side, and rather than custom-made characters, Chimera Squad is a prefab team - eleven elite soldiers, alien, human and hybrid alike, all with distinct abilities and loadouts to aid them.  For example, Torque is a Viper who can slip through vents to launch ambushes and spit venom to blind/disable enemies, Verge can add enemies to his psionic "neural network" to grant himself stacking passive bonuses, Zephyr is a close-ranged but quite powerful melee fighter, and Cherub primarily serves as a support character, drawing enemy fire and shielding allies from harm.  They take on a variety of missions across City 31, defeating terrorist threats to the city and gradually exposing a larger conspiracy, and per series standards, gradually collect resources and research to unlock new gear and abilities in the course of their missions.  The campaign is quite short by XCOM standards and, unlike most games, the death of a single agent results in an immediate game over.  A definite changeup for the series, though for $20 (or less if it's on sale), it's a fun little game to play through once or twice while you wait for XCOM 3. 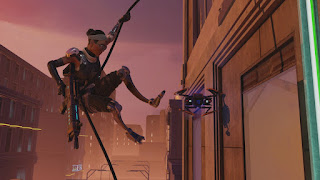