A game that had a considerable amount of hype behind it, in no small part because it would have been Square's first (published) game on the Playstation 2, but it ended up being quickly cast aside after its release.  I've hyperbolically described a fair number of modern games as having the barest minimum of gameplay in between long droughts of graphical filler, but the Bouncer might just be the first game I've seen that literally follows that design philosophy.  Playing like a 3D beat-em-up (and similarly to other DreamFactory developed games Tobal and Ehrgeiz), you battle 2-6 enemies in bouts that typically last under a minute and then more of the story unfolds in long sequences of FMVs, with only about three or four run-through-a-maze action segments providing any changeup between those two elements.  Rinse and repeat for approximately two hours (about a third of that if you skip all the cutscenes), and you've completed a playthrough.  Yes, the game is really that short; so you can imagine how many die-hard Square fans lined up, plunked down $50 to play an epic next-gen action-adventure game on their expensive new Playstation 2 console, and were left severely disappointed when they finished the whole game in the same afternoon they first booted it up.  They tried to add at least some depth with the built-in experience system, where landing the finishing blow on enemies earns your character points that allow you to unlock new moves and power up your attributes, as well as a couple of extra game modes (including a four-player versus battle) where you could put your powered-up characters to a greater test, but it all just feels like fluff in the end; especially when the core gameplay is so stock that arcade games stretching all the way back to the mid-'80s already did everything it does better.  Hell, even the Playstation 2 itself would get some much better RPGs that blended in beat-em-up elements like Kingdom Hearts, Yakuza and Odin Sphere, all with much more engaging and strategic gameplay to boot.  So while the Bouncer might at first appear to be a long-lost Square gem to gamers who weren't around in the early 2000's, it's actually been forgotten for good reason - it's so insubstantial and over with so quickly that it leaves no lasting impact. 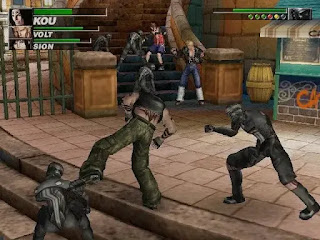