Drakkhen was noted in its time for being a relatively innovative game; it was among the first to utilize paper dolls to show the party's currently-equipped gear and have a pseudo-3D perspective for its overworld, with sprite-scaling to indicate distant objects and vector-animated ground paths to aid in navigation.  Nowadays, though, it's mostly known for being a strange and surreal experience, with numerous bizarre enemy encounters throughout - bumping into urns in the road pits you against a giant jackal's head that fires lasers from its eyes, constellations in the sky will randomly attack you during the night hours (pictured: a bird constellation bombarding the party with fireballs), and one particularly deranged random encounter involves a dancing silhouetted woman repeatedly chanting "I love you" in a constantly fluctuating pitch.  All told, though, it's rather light on actual role-playing elements - while there are four playable classes to pick from, you must make a party comprised of at least one of each, so you really get no choice at all in your team's composition.  There are relatively few NPCs to interact with, and nearly all just dispense bits of dialog before sending you off to the next plot point, or just serve as generic shops and Araks (houses of healing); the latter operate for free, though, which is quite handy as the early game is brutally difficult.  Surviving long enough to get to one and heal your injured and dead is a task in itself, though, as enemy encounters are irritatingly frequent and your equipment breaks frequently, necessitating that you carry several backups as you travel (which aren't cheap to purchase, but are frequently found as random drops).  You also have disappointingly little control over combat itself - your characters move and act without any direct input from you, though you can direct them to attack, defend or cast spells (which they will continue to cast until they deplete their MP, or you change their command).   All of these were probably conscious decisions made to lengthen the experience, too, as the overall plot is quite short and can be finished in only a few hours once you know what you're doing. A pretty interesting game for its time (as well as one of the very first SNES games ever released), but its punishing difficulty, simplistic plot and overall limited gameplay ensure its appeal is pretty restricted nowadays, save for those who enjoy games with a generally weird atmosphere to them. 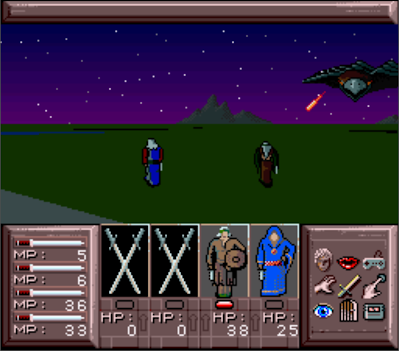