Developed concurrently with Fatal Labyrinth and, in fact, sharing several assets with it, Dragon Crystal was a similarly-themed roguelike for the Master System and Game Gear, released one month after its counterpart. Gameplay between the two games is quite similar overall, putting heavy focus on its randomized dungeons and loot with shuffled effects each game. Nevertheless, it does have a few enhancements - gold actually serves a practical purpose now (buying continues when you die), you don't have to fear death from overeating, and you're constantly accompanied by a dragon that slowly evolves as the game progresses; while he does not help you in combat, the fact that he trails behind you at all times can help prevent you from being surrounded.  On the downside, the game does have a significantly worse UI; you have to stop the game to see your health and there's less text-based feedback than you got in Fatal Labyrinth, even in the higher-resolution Master System version.  It's not a starkly different game from Fatal Labyrinth, but it fills the same niche - having a traditional roguelike for Sega's 8-bit platforms.  Collectors of Game Gear and Master System titles should have some fun with this one. 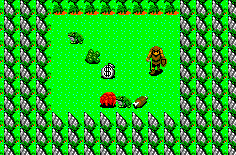 Developer: Sega
Publisher: Sega
Platforms: Sega Master System, Game Gear
Released: 1991
The Game Gear version was also released on the 3DS Virtual Console in 2012.  A sequel, Dragon Crystal II, was also briefly available on the Japanese-only Sonic Cafe service for mobile phones, but the service has been discontinued and the game has not been rereleased since.
Labels: ⭐⭐, 1991, Quickie Reviews
Newer Post Older Post Home