The companion game to beloved indie darling Undertale, Deltarune actually began development several years before it, and appropriately for a game still yet unfinished, it goes for much greater scale in both its gameplay and narrative design.  But does Deltarune manage to capture the magic of its sister game even in its unfinished state, or does it simply get overshadowed by it?

2015's Undertale is a game that attracted an enormous following despite its humble origins, low budget and being built in Game Maker, even being nominated for numerous awards in shows usually almost exclusively reserved for big-studio productions, and even winning a few (with IGN awarding it their 2015 award for Best Story and even naming it the 20th best game of all time).  So, when a followup was finally publicly announced, it of course generated a lot of buzz and high expectations; moreso when it was revealed to have begun development well before Undertale and, as of early 2022, remains unfinished.  Toby Fox saw fit to release the first chapter of the game as a free demo and, during the ongoing COVID-19 pandemic, released the second one as well, giving people a chance to see just what it had to offer in comparison to Undertale.

The answer, as it turned out, was quite a lot.  While its exact relationship to Undertale still isn't entirely clear (it retains numerous characters from it, though whether it's a sequel, prequel or alternate universe is left ambiguous, at least so far), it retains many elements from its sister game.  The warm characters, the simple-yet-stylish visuals, interesting gameplay and the sense of fun it carries all remain intact.  However, Deltarune also aims for much greater heights on every front - all characters show much more fluid and technically-proficient animation, with little to none of the "floating joints" style that was evident in the first game, and its use of lighting effects and shows are surprisingly effective even with the minimal color palette.  The combat screen is also given a Final Fantasy style side-view rather than a more basic Wizardry-styled UI, allowing the player character and his allies to show off their own animations.  The music, as ever, is phenomenal, perfectly highlighting the epic combat as well as any mood the story attempts to go for, and stands as proof that well-composed electronically-generated music is as timeless as any other.

Even in its unfinished state, Deltarune's gameplay also shows quite a bit of depth and polish.  Rather than simply controlling one character, you now control up to three as the story dictates, and they're given distinct abilities to match.  Kris serves as the protagonist and the one primarily responsible for non-violent interactions with enemies (though they can also order the other two characters to participate as well, using one/both their turns that round to move enemies closer to "Tamed" status).  Ralsei, as a compassionate and friendly character, serves as the party's healer and can knock enemies out harmlessly with Sleep spells, which also offers an alternate way to Tame them.  Susie, being a more hot-headed and violent character, uses primarily offensive moves and acts on her own for a good portion of the first chapter, with the other two having to warn enemies of her attacks in advance if you wish to remain on a pacifistic route (though she will eventually become more of a team player and start to take orders). And of course, your choices do actually make a difference; not so much the dialog choices (which seem to actively poke fun at the lazy flat good-or-bad-choice plot branching present in so many modern RPGs), but in pursuing a pacifistic or deadly route through the story, events and story outcomes for each chapter will change substantially.

Combat retains the minigame-based approach that Undertale implemented, with basic attacks and specials alike playing out as minigames based on timed button presses, and avoiding enemy attacks playing out by having the player move a small heart icon around within a box to avoid patterns of projectiles.  (This also comes into play outside of battle, where the player must avoid traps or hazards by keeping their player's heart icon outside of their hit zones).  Spells and special techniques now operate off a "TP" bar that is shared between the three characters, and which can be boosted by using the Defend command (effectively skipping a turn), or by narrowly avoiding projectiles during the dodge minigames - a second outline appears around your heart icon, and any projectile passing through that outline (while not hitting your heart) will boost the TP gauge slightly.  So, in effect, doing well requires not just avoiding attacks as they come, but having enough confidence to let the attacks narrowly miss you so you can build meter, similar to a mechanic in Radiant Silvergun where you'd gain points by narrowly avoiding a fatal shot.  Items can also be used in a pinch to recover HP or TP without requiring meter to be spent, though these are quite limited in how many you can carry at a time, they're best used as a last resort.

Of course, Deltarune wouldn't be nearly as memorable or captivating as Undertale if it didn't have a great cast of well-written characters.  It certainly does not disappoint there; yes, much of the cast from Undertale returns as the inhabitants of the player's hometown, but they mostly serve as ancillary characters, with care taken so that they don't upstage the main characters of this story.  Thankfully, the new cast is just as brilliantly realized as Undertale's - vivid, expressive, with some great well-written dialog and genuinely funny jokes, and never once falling into being lazy cardboard-cutouts.  Even the story's antagonists are very well-realized, three-dimensional characters with their own histories, motives and personalities, and show genuine emotions throughout, including that very human yearning for acceptance that all of us have.  Similarly, the story isn't afraid to show its emotional side, running the gamut from hilarious to disturbing to tender as events warrant while never once feeling forced or out-of-place.  Basically, Deltarune has a sense of energy, fun and warmth I've not had with a game since the likes of Chrono Trigger and Earthbound, and that's saying a lot considering the sheer number of RPGs I've played.

So, with only two chapters publicly released and five more to be released at some indefinite point down the road, is it safe to say that Deltarune lives up to the hype?  I certainly think so.  It's a game with a lot to offer on every front - its polished gameplay, heartfelt writing, stylish visuals, amazing music and sound design and a sense of fun and passion that few other games I've ever played have captured all make it an incredible experience that proves budget ultimately has very little to do with a game's quality.  AAA Games only seem to be concerned with getting larger and prettier, with gameplay and storytelling relegated to a shallow, heavily-compromised afterthought at best, and most just bore me to sleep within only a couple hours of starting them up, leaving me wonder why I even bother to keep up with current gaming tech.  Then comes a game like Deltarune to remind me of why I love video games and RPGs in particular.  Even with only two chapters done, it's a brilliant experience; hell, even if it never gets finished it'll still be one of the best games I've ever played.  In an era where 99% of all time and money in the medium of video gaming goes into pretty-yet-empty 3D backdrops, models and textures that'll age about as well as milk, and algorithmically-generated bland filler just to meet some arbitrary publisher-mandated length quota, with another 3 years of multi-gigabyte patches to follow just to make it slightly resemble an actual, finished product, it's nice to see developers who still remember what really makes gaming great.  And since the demo is currently free, there's little excuse to not at least give it a chance to win you over too.  Some games really are worth the wait. 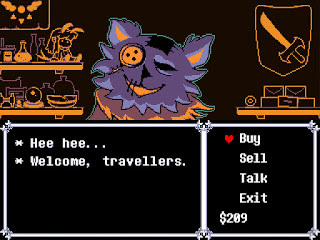 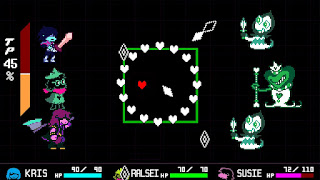 Developer: Toby Fox
Publisher: Toby Fox, 8-4 Ltd.
Platform: PC, macOS, Switch, Playstation 4
Released: 2018, 2021
Recommended Version: I'd say play the PC version if you can; according to the developer the console versions have had some issues with updates breaking things, and patching for them may come slower than the PC version.
Labels: ⭐⭐⭐⭐, 🌈, 🎵, 👑, 2018, Full Reviews
Newer Post Older Post Home