Microprose is a name commonly associated with in-depth simulation games that have a surprising touch of realism without sacrificing playability.  Darklands takes that philosophy and applies it to a low-fantasy RPG set in a meticulous recreation of medieval Germany in the 15th century.  But does their keen eye for detail and realism pay off in the realm of role-playing games, or is Darklands a game crushed by its own ambition? 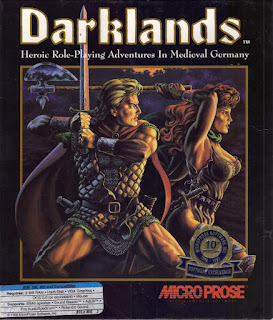 Microprose is another company name well-known to computer gaming enthusiasts - it was the original development house of one Sid Meier, who would bring us beloved games like Pirates! and of course the Civilization series, which were highly regarded in their time and continue to be hugely popular even today.  But even without factoring him into the equation, they gave quite a few other beloved franchises life - from business management/tactical alien combat game X-COM: UFO Defense to the 4X classics Master of Orion and Master of Magic.  All hugely influential games in their time whose legacy lasts to present day.

One of their titles that slipped by relatively unnoticed was Darklands, which was a little surprising considering what it promised - an immersive, open-ended role-playing experience set in a relatively realistic facsimile of medieval Germany whilst it was part of the Holy Roman Empire.  Its world map was surprisingly period-accurate, having numerous real-life towns and landmarks in place, and it goes to great lengths to use era-appropriate German terms like "schulz" (town leader) and "fraubritter" (robber baron).  The game exhumed an arbitrary "levels and experience points" system in favor of having to actually train up your skills through use - something pretty uncommon at the time.  It even touted its surprising approach to realism in its tagline - "in medieval Germany, reality is more horrifying than fantasy".  But what led it to being overlooked by so many RPG enthusiasts?  Well, that's a bit of a complex topic.

The first thing to note is that despite the tag line, Darklands is not totally realistic - some fantastic elements show themselves pretty quickly.  This is most prominent in the alchemy system, wherein you brew up potions that have similar effects to "spells" in other RPGs - usually inflicting detrimental effects on your enemies, but they do have beneficial uses too, boosting weapon damage/accuracy, temporarily improving stealth or purifying tombs full of undead, letting you claim their treasures unmolested to name a few.  A holy magic equivalent comes in the form of praying for miracles to various saints, of which there are over 100 in the game, with equally varied effects - bolstering stats temporarily, driving enemies away, or even granting the ability to walk on water or temporarily removing the need to breathe (avoiding the effect of noxious potions and the like). All of these are activated by spending "Divine Favor", which can only be regained by doing virtuous deeds around the land, and having a greater Religion skill will make your prayers more likely to be heard.  Darklands' setting is also a fair bit more progressive than the real Holy Roman empire - female characters still can't reach the upper ranks of the clergy, but they can take on almost any other profession the game has to offer and do it just as well as any male character. (Some saints will also only bestow help upon you if you have at least one female character in your party, so it's worth diversifying for that reason as well.)  Bandits and mercenaries are common foes, as are knights and even townsfolk if you run afoul of the law, but a lot of supernatural enemies are present too - from demons to witches to kobolds - so there's just as much enemy variety as any good fantasy RPG.

To deal with the many challenges you face, you'll need skills and experience.  Darklands definitely does not skimp on this front; in fact, its character creator is probably the most in-depth and ingenious one I've seen in any game to date.  You generate characters by walking them step-by-step through their life, beginning with their social caste at birth (from noble to trader to country-born peasant) and from there, you select a career path in steps of five years.  So, you can be born a noble, take up a career as a Monk-in-training, work your way up to a Monk proper, then become a friar or a bishop before your adventuring career begins.  Or one could begin as a city commoner, join the military, become a soldier, work their way up to become a seasoned veteran, and retire to become a hunter.  Each step of this process comes with a new pool of skill points to spend freely, as well as shaping what you can spend them on - naturally, a militia-raised character will have more points to spend on things like weapons skills and riding, but few to none to put into things like learning Latin or "Artifice" (disarming locks and traps).  Similarly, becoming a hermit for a time will give you little chance to develop your language skills and none to develop your Streetwise stat, but can give you a substantial boost to Woodwise, Religion and Virtue.  You can repeat taking five-year career steps multiple times before beginning the game proper, even into old age if you wish.  This does come with some drawbacks, though - characters will start to get substantial stat penalties as they age (they can and will die from old age as well), but they will also begin with more stat points, money and may even have better starting gear than younger, less-trained characters.  On the other end of the scale, starting too young will put you at a severe disadvantage with low stats and virtually nothing of value to your name, making it extremely difficult to survive.  In effect, this serves as a difficulty setting, character generator and even a touch of a storytelling mechanic all rolled into one, which is pretty ingenious. 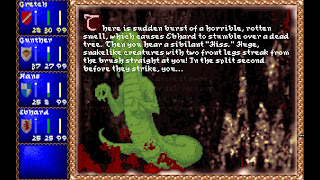 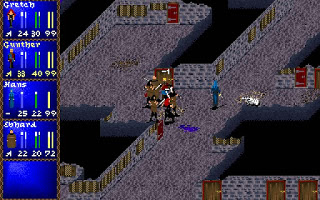