Betrayal at Krondor is widely considered a PC classic - not just for its realism and eye for detail in every element of its design, but for its immersive narrative that strives to feel as close to a good fantasy adventure novel as possible in every detail.  But is this one adventure still worth undertaking today, or is it betrayed by the rose tinted glasses of nostalgia? 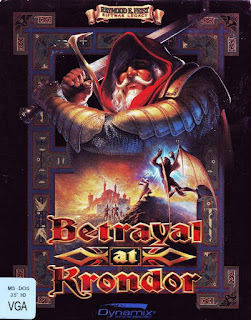 Dynamix is a PC gaming company that lasted from 1984 to 2001 and created a pretty wide catalog of games spanning a number of genres; most people probably remember them for their flight simulations (Red Baron) or their prevalent puzzle series The Incredible Machine or for kicking off the fan-favorite online FPS series "Tribes", but RPG fans remember them too, primarily for one reason - a little gem known as Betrayal at Krondor.

Krondor's goal, as stated in its manual, was to be something RPGs had never dared to be before - an immersive narrative experience above all else.  Fittingly, it was set in the same universe as Raymond E. Feist's Riftwar series, and while he didn't write the script for the game, he had final approval on what was written.  However, the developers did such a good job replicating his style that Feist changed very little from what they wrote; In fact, he liked it so much that he made Krondor part of his official canon, writing a novelization for it a few years later.  While it still has many familiar tropes of the genre including dungeon crawling, battling enemies, finding treasure and setting traps, these are worked into the narrative too, with quite verbose (and well written) text blurbs for even mundane interactions with enemies, treasures and objects.  Characters interact with even nameless NPCs on a familiar and personal level, making them feel like they're actually inhabitants of this world with histories and rich backstories even if you don't get to see much of them.  Even using items like potions and whetstones gives you a fun little text blurb, which helps you feel like you're there in the moment rather than doing mundane number crunching.  The world itself fits this too even in spite of the limited technology of the time, putting the player in a first-person 3D perspective and letting them explore the world as if they were really in it - no small feat for a game that shipped on a handful of floppy disks.  (A CD version was released later, but like many enhanced CD ports, it just adds a Redbook audio soundtrack and fixes a few bugs in the original release.).  Each leg of the story is referred to as a "chapter", with the perspective shifting several times throughout to different sets of protagonists, and even quicksaves are referred to as "Bookmarks".

Being an early 3D game also means that Krondor hasn't aged the best on a visual level. While the pre-rendered objects in your inventory and character sprites aren't bad (they digitized stills of actors in costume for them), the environments you wander through definitely look a bit rough - you walk on flat grassy ground with paths denoted only by brown or gray, and the world is populated by square buildings and triangular peaks with crude textures applied to give the appearance of hills and mountains. Dungeons are similarly in full 3D,  though design-wise they still feel much like Might and Magic or Wizardry, mostly consisting of large rooms connected by long, uniform corridors.  On the other hand, combat animation is rather good; well, aside from the chess-piece-like gliding each character performs while moving around the grid. Units will actually visibily swing their swords and hit their foes, load and fire crossbows, and visually cast spell effects, complete with some nice flourishes - when a fireball impacts on an enemy, it will explode and scatter particles across the screen for a few seconds.

Betrayal at Krondor is one of the earliest examples I know of of an RPG to completely do away with a traditional experience system.  Instead, each character has an array of skills with varying degrees of proficiency at the start, and these can only be improved with active use, paying a trainer, or finding/buying skill books. However, you do have the option to emphasize on a particular skill to help it grow faster - focusing on just one will give it approximately a 50 percent bonus to growth, while adding more will result in less, but still faster than an unfocused skill. Not all are centered strictly on combat, either. Stealth can potentially warn you of an upcoming ambush or even let you turn the tables on enemies and get the first move in battle.  Weapon and armor smithing let you keep your gear in top shape - a very valuable thing as all but the most basic of equipment is very expensive. Barding - your characters' ability to perform with a lute in various taverns - is more useful than you'd expect for that same reason - a successful attempt will earn you cash. Not a great deal, mind, but often enough to afford some rations or a stay at an inn to top off one's health, which can make all the difference in a tough battle.

Unlike many of its contemporaries, Krondor doesn't have completely free roaming - as mentioned, the characters you command are pre-generated, and though you can shape their skill growth to a degree, it's generally best to work on improving what they already have some skill in rather than trying to force them into different roles; there's little point in having more than one designated lockpicker, for example, and attempting to spread skill growth around the party would just result in all of them being unable to pick tougher locks. The world is a quite large and sprawling one, divided up into several distinct map areas, though during any given chapter you can only visit a handful of these. Thankfully, they are large and varied enough to hold your interest and give you plenty of opportunity to grow your team's skills and earn useful resources.  Not just enemies to fight, either - there are plenty of small villages to visit, characters to interact with, and scripted events with both good and bad outcomes - oftentimes, you must weight whether a potential reward is worth the risk (and many times, it isn't).  There are side-quests to undertake during each chapter too, and even those with minimal rewards are often worth doing for the potential skill level growth within.  Exploring off the beaten path frequently rewards you with one of the game's more interesting elements - wordlock chests.  Most chests in the game are open able via keys or a sufficient lockpicking skill, but these are inscribed with a riddle, which you must solve by unscrambling one or more words on the box's tumblers.  They often contain useful items (and are required to progress at some points), but all are worth seeking out to see some more clever writing.

The experience manages to be just as engrossing on a gameplay level, too, in no small part because of its high difficulty level - it's a game thatr eally makes you feel like your tiny band of adventurers is pitted against a stark and hostile world.  Roads are frequently booby-trapped with some nasty obstacles which play out on the combat grid like something of a minigame, having you avoid them or trigger them without putting yourself in harm's way.  Chests you encounter are often booby trapped, so exercising caution before opening one is often wise.  Enemies (and unscrupulous NPCs) will often carry poisoned or spoiled rations, so checking the merchandise before you automatically dig into them while resting is always wise.  Enemies almost never fight fair - you're almost always outnumbered, and they know well enough to get in close right away to prevent your mages from casting spells, and will barrage your fighters with crossbow bolts or debilitating spells of their own while they're fighting in melee range; using magical items of your own to give yourself an edge is often necessary, especially early on.  As mentioned above, money is always tight and higher-end gear very expensive, so avoiding costly poison, illness and near-death cures as much as possible is paramount to keeping your equipment current. A big part of that too is managing your health and stamina; stamina essentially serves as an extension of your health, with every action you take in battle eating it first, then health once it's depleted.  Krondor is one of the few games I've seen that breaks the axiom of "the only hit point that matters is the last one" - as your health depletes your stats will also drop, making it extremely difficult (if not impossible) to even land hits on enemies, let alone perform other tasks.  Resting often, at inns whenever you can spare the money, and keeping yourself ready for whatever may come will serve you very well. As will the game's Bookmark feature - basically a Quicksave and something you should always use before doing anything even potentially dangerous.

After playing it, there is now little doubt in my mind as to why Betrayal at Krondor is considered a classic DOS RPG. The game has definitely not aged gracefully on a visual level, but it stands as perfect proof that a well-written story and strong game design is timeless.  Its strongly written prose and dialog for even mundane interactions draws you into its world and makes you feel like an active participant rather than a spectator, and its gameplay pulls no punches either, with a vast and hazardous environment that requires you to carefully prepare for every obstacle you face.  In spite of all this, though, the game rarely feels unfair; it asks a lot of you, but the rewards it gives back make it all worthwhile. Krondor is an engrossing game despite its technical limitations, and its narrative design is something more modern RPGs should be taking cues from.  Really, the only disappointment is that it doesn't have more of a legacy - there was a spiritual successor in 1997 called "Betrayal in Antara" and a proper sequel released a year later, though neither had the original team involved in development and the quality definitely suffered for it. 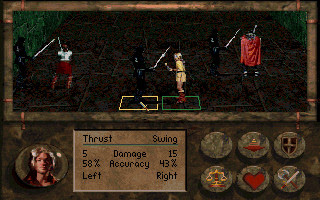 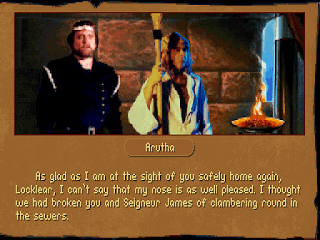