A short-lived and mostly-forgotten duology of RPGs for the original Game Boy, Sword of Hope was also a rare entry in the genre from Kemco, a developer mostly known for licensed tie-in games.  But does Sword of Hope have anything to offer RPG fans today, or is it one that's slipped into obscurity for good reason? 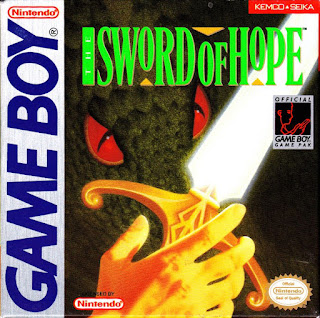 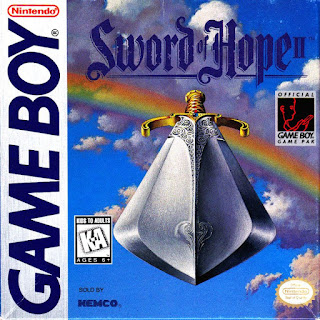 The Game Boy was of course Nintendo's big contender in the world of portable gaming, and it wasn't hard to see why it became such a big hit, having a huge battery life compared to its competitors (in no small part for lacking a backlight or color) and a surprisingly strong library of games; hell, it launched with Tetris, which is arguably the most popular video game of all time even today.  RPGs were a fairly uncommon sight for the platform, though, at least before Pokemon came along and became the worldwide phenomenon it is today.  The first three SaGa games were localized as "Final Fantasy Legend" and the first Seiken Densetsu as "Final Fantasy Adventure", but for the most part RPGs remained Japan-exclusive on the Game Boy.

Sword of Hope was one of the few that tried to compete, though, and it was a decent enough effort for the time.  The game was created by Kemco, a company mostly known for licensed tie-in games; however, they did also publish well-received ports of three PC point-and-click adventure games on the NES, affectionately known as the Icom trilogy - Shadowgate, Deja Vu and Uninvited.  They were very much products of their time, with numerous puzzles that didn't make a great deal of sense (requiring you to use the spear to defeat a troll - sword, hammer or sling will all result in death.  Or more famously, opening an already-open star map, taking a star from it, then using it to kill a wyvern) and the barest minimum of animation, but were still pretty well-liked in their time and continue to get rereleases even today, most recently appearing on a compilation called "8-Bit Adventure Anthology".  Shadowgate even had a successful reboot in 2014, reworking it to a more modern style of design while retaining its iconic dark imagery and music, so it's clear these games, flawed though they were, have a lasting and unique appeal.

I bring this up because Sword of Hope is very much built on the same gameplay model, and even uses a similar UI - a small viewing window depicting the current scene, with a mini-map at the bottom showing the directions you can travel in from the current location, as well as a list of verbs to utilize in order to interact with characters and objects you encounter.  Mostly in the form of looking (also used to talk to characters), opening or hitting something, though you will also occasionally have to use an item or cast a spell to proceed too.  In a rather strange twist, the story explains that most people in the world have been transformed into trees, and indeed, they're a very frequent sight - almost every screen on the overworld has some visible, and you can speak with them to get bits of backstory or clues to progress.

The basic formula is interspersed with RPG elements, too - you have stats, experience points, levels, equipment and spells that can only be cast in the thick of fights.  Fights themselves occur randomly when you move to a new screen or attempt to, and at times you'll have to fight several in a row - sometimes as many as six or seven before the game finally gives you a break and lets you go the way you want to.  However, fights are at least relatively quick and painless for the most part, which is a good thing as you will frequently have to grind out levels to defeat bosses and farm money for upgrades from shops in order to stand a chance.  This design ends up being a bit of a double-edged sword - the world is more tightly designed than most RPGs of the time, largely free of huge swaths of empty land that had little to interact with; on the other hand, you still have to grind quite a bit to succeed, and that can get pretty tedious when you're getting into several fights in a row while barely managing to progress to where you need to go next.  It also doesn't help that you cannot sell your old gear to recoup some of the money - as soon as you upgrade to a new weapon or piece of armor, the old one gets tossed and never seen again.  Bizarrely you also don't seem to have the ability to pick targets for spells - they hit enemies or even yourself randomly, which is rather a problem and makes using attack spells rather useless when you can attack with a weapon and reliably do damage to an enemy without risking your own health.

Puzzles, as you'd expect from a point-and-click of the era, are not always clear, sometimes coming down to guesswork or just abusing the game's built in hint system (using the Grace spell at the temple).  The game's translation doesn't help either, with some clunky dialog and occasional inconsistent spelling, sometimes within the same scene ("alter" and "altar" both get used at the temple).  And of course, having to backtrack anywhere is always a pain when you're probably going to get into a dozen fights on the way there and back.  Finally, the game utilizes a password system rather than a battery backup, which isn't the worst I've seen (16 characters); however, it also uses Greek letters and symbols instead of just straight letters and numbers, which can make writing them down a bit trickier.

Not much has fundamentally changed in Sword of Hope II, which came out the following year in Japan but took another five years to appear in the west, debuting in 1996 - a time when the Game Boy's popularity was fading (and would continue to do so until Pokémon debuted in 1998) and the handful of people who had purchased the original game had probably forgotten all about it, especially since several high-profile RPGs like Secret of Mana, Final Fantasy III (VI), Phantasy Star IV, Shining Force II and Chrono Trigger were all out by then.  A bit of a shame, as the sequel is an improvement over the original in virtually every way.  With a revamped UI that features a much larger viewing window, far greater detail in its visuals, more animation, better music, a more polished translation with a lot more dialog and story to experience, and some basic features that were absent in the first (selling items, battery-backup saves, and you can save anywhere you like) being implemented.  You also get more party members this time, which makes combat a bit more varied and strategic.  It's a significantly better game than its predecessor, though its long-delayed release left it little hope of competing with other big names of the time, which resulted in it selling poorly and becoming a rare and expensive title in recent years (though it is available on the 3DS eShop for however much longer that lasts).

Kemco's Sword of Hope is a name that's rarely spoken these days, and after playing both games, I can definitely see why - the original was very much a product of its time, with clunky and rather dated adventure game design paired with a mostly forgettable, awkwardly-translated RPG experience.  Its sequel was denied its due owing to a long-delayed western release, so despite being a substantially better game and even a decent RPG for the Game Boy, it simply had no chance of competing with all the amazing titles that were being released on the 16-bit platforms in the intervening years.  They might be worth a quick look to RPG buffs or big adventure game fans as a novel and relatively obscure series, but if you're looking for high-quality '90s RPGs to add to your collection, there are simply too many better options to spend your money on over these. 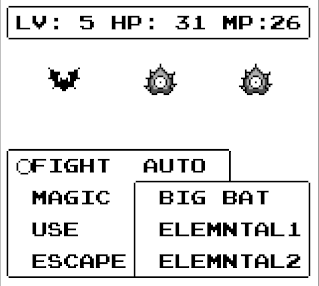 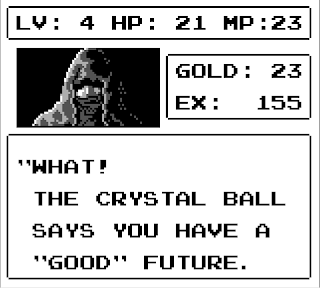 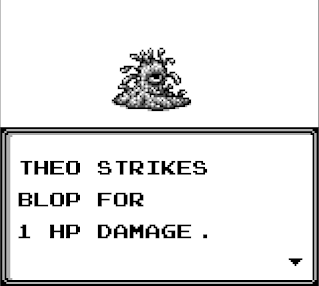 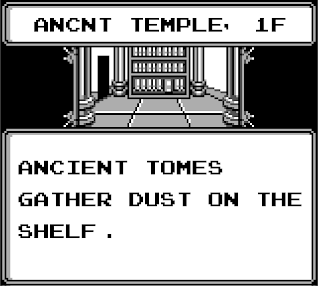