After more than thirty years of uneven success in the west but massive popularity in Japan, Dragon Quest's eleventh numbered entry was released to considerable worldwide acclaim.  But does the series' long-standing traditional design still pay off after three decades, or does it just begin to fall by the wayside after a slew of changes and innovations in its competition? 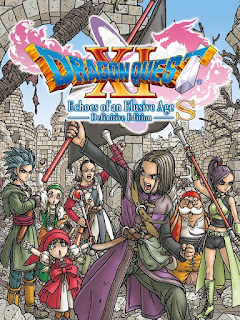 It's been 35 years since the Dragon Quest franchise's debut, and surprisingly little has changed for its eleventh numbered entry. Even with a leap to gorgeous HD, some excellent orchestral music and high quality voiceover, it's instantly recognizable as Dragon Quest. Akira Toriyama's character designs, writing and design by Yuji Horii, the punny enemy and spell names, many of the music cues and sound effects, and the combat still being relatively simple turn-based fare with a party of up to four characters haven't changed a bit. Combat is visually three-dimensional and you and enemies move freely around the field, though this is purely a visual effect and has no bearing on the gameplay whatsoever. But if even the modern aesthetic is too much, you have the option to change the game to a 2D art style reminiscent of the Super Famicom Dragon Quests; even mid-run if you wish.

However, some nice quality of life changes are made for Dragon Quest XI S.  You can speed up battle animations and assign each character AI patterns to quickly deal with random encounters, then toggle them off at any time when you need to deal with tougher fights or bosses.  Healing after a fight is condensed into one simple menu command, which saves quite a bit of hassle, particularly later in the game.  Monsters are visible on the map, doing away with the irritation of frequent random fights and letting you engage on your terms.  You can give yourself a slight edge before a fight as well - if you approach an enemy in the field and then strike them with your weapon, you'll sneak in a free hit before the fight even properly begins.  Some added challenges are available right from the get-go too, labeled in the startup menu as "Draconian Quests"; things like making all the enemies stronger, causing an instant defeat if the main character is defeated, not being able to equip armor or use shops, or the rather annoying effect of "Shypox" which causes characters to randomly lose turns.  A nice way to give genre veterans more of a challenge, and the game even notes on the menu when you've completed a playthrough with one or more of these activated for the duration so you have the bragging rights.  (You can also deactivate them at any church if you find them to not be to your liking.)

It's not all standard '80s RPG fare, though.  After gaining levels you will earn Skill Points; these allow you to customize your party by unlocking bonuses, depicted in the form of grid with panels that flip over when you spend points (not dissimilar to Final Fantasy XII's License boards).  Generally speaking, these let you give your characters greater attributes, bonuses when using specific weapon types (extra damage, chance to parry or get criticals, et cetera) or learn new attack skills.  Some panels with particularly strong bonuses are also locked at first, and can only be opened (and points spent on them) when you unlock at least four panels surrounding them.  One can also freely respec their characters if a current build isn't working (or they just want to use a particular skill temporarily) by visiting any goddess statue or church, though this does carry a small fee.

Another prominent mechanic is "Pep".  During battle, and after taking several hits in a row, using a particular skill, or just randomly as a fight starts, your character may become Pepped Up, which gives them a boost to their stats for a few turns;  the exact stats boosted vary from character to character, but generally emphasize their abilities.  Pep wears off after a few turns, but it does carry over between battles as well, so any turns you have left on it after winning a fight don't go to waste.  Some particularly skills are also only available during Pep status, and generally (but not always) require two or more participants to be in Pep at the same time to use them.  Generally, these are quite powerful attacks that use every character's turn (somewhat similar to the Dual/Triple techs in Chrono Trigger), but the sheer power they offer makes them worth using when the opportunity arises.

Crafting returns again for this entry, this time in the form of the Fun-Size Forge, a minigame that allows you to turn various items into new weapons, armor and accessories. It's largely optional (unless you're playing with shops disabled), but generally worth doing, as items you can forge at a given stage will often be better than what you can buy at shops. If you do well at the forging minigame, they'll get some nice bonuses on top too, even boosting innate abilities like status resistances or stat bonuses.  It's worth it to explore around a bit whenever you reach a new area - gather up items you find in the field and scavenge for more jars/pots/chests whenever you hit a new town or dungeon.  Sidequests frequently award uncommon or rare crafting components too, so keep an eye out for those.

While the franchise is still quintessentially old-school in design even three-and-a-half decades out, Dragon Quest XI manages to stand out as distinct and memorable regardless.  Its traditional, yet highly polished gameplay remains its strongest asset, ensuring it's a game easy enough for newcomers to get into while long-time genre fans can tweak settings to give themselves more of a challenge.  The world of Erdea is brought to life in 3D in brilliant form, its environments managing to look like a gorgeous modern game, yet losing none of the colorful cartoon style and personality of Akira Toriyama's distinct art.  All the familiar sound effects and music cues that have been here since day one return, but the new stuff is great too - the voice acting is perfectly on-point, while the music is beautifully composed and adds tremendously to the atmosphere of any given area.  Dragon Quest takes relatively few risks with its fundamental gameplay, but when it takes care to hone the format it's followed for over thirty years to virtual perfection, it's hard to complain.  Whether you love DQ's adherence to tradition or hate it, it's one franchise that's here to stay. 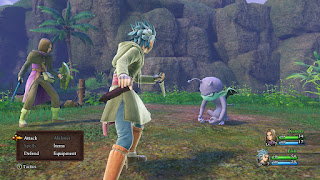 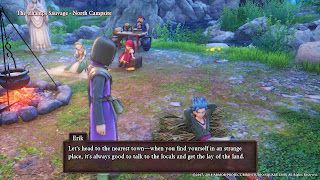 Developer: Square Enix, Orca, Toylogic
Publisher: Square Enix
Platform: Nintendo 3DS, Playstation 4, PC, Switch, Xbox One, Stadia
Released: 2017, 2019, 2020, 2021
Recommended version: Any of the later versions (released as "Definitive Edition") are the ones to go with, as they add new content and the redone orchestral soundtrack which sounds much better than the synthesized one.  The Playstation 4 version has this available as a downloadable upgrade to the original version (as well as a physical release), while the PC, Switch, Xbox One and Stadia versions all have it packaged in by default.
Labels: ⭐⭐⭐½, 🎵, 👑, 2019, Full Reviews
Newer Post Older Post Home