Star Ocean: The Second Story was the second game in the series to reach American shores, as well as promising a lot with its vast skill system and action-oriented combat.  But does it prove to be a worthwhile, more "western" take on Japanese RPGs, or does it simply try to do too much and fall apart in the execution? 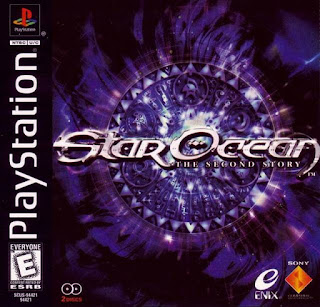 I didn't really know what to think of Star Ocean 2 the first time I played it. At first glance it appears to be a science fiction story and promises multiple story paths and endings, but it's only minutes in before you figure out that this is the lowest form of bait-and-switch marketing. You start on a spaceship, yes, but within minutes you're whisked away to a generic fantasy world, where you spend the duration of the game (until Disc 2, where you end up on a different but suspiciously similar planet). The multiple story paths aspect is a flat-out lie too - both characters you're given to pick from meet up within those same few minutes and never separate through the entire runtime save in a small handful of non-interactive cutscenes, so the story differences are miniscule at best and insignificant at worst.  So, with two lies under its belt right out of the gate, things aren't off to a particularly good start.
Looking beyond that, Star Ocean proves to be a relatively mundane action RPG, allowing you to take direct control of one character out of four and battle enemies on a 3D field. Unfortunately, that doesn't necessarily mean it's any fun - the weird pathfinding ensured my characters would constantly run in circles or to the corner of the screen between attacks for no apparent reason, some characters stop dead in front of the enemy for a full second before swinging (leaving them plenty of time to be hit and stunned themselves), you can only equip two skills per character at a time, effectively quashing any real variety or strategy, and the godawful AI of my teammates would have them constantly waste all of their MP within a single battle, leaving me high and dry for boss fights (and never ever healing me at critical moments without being told to).
A bad combat system in a genre so heavily reliant on it is almost always a killing blow in itself, but we haven't even gotten into the true selling of most any Japanese RPG - the storytelling and character building element. Frankly, though, it's not better in the least; the dialog is atrocious purple prose nonsense and the voiceover sounds like all the actors are shouting their lines through a pillow while doing the worst funny-voice "acting" they possibly can; Precis in particular sounding like the unholy bastard child of Roseanne Barr and Gilbert Gottfried.  Pretty dire stuff, particularly as by 1999 the action-RPG genre already had several great, well-executed examples under its belt and games like Lunar and Metal Gear Solid proved that having high-quality voiceover could be used to great effect to bring characters to life. And the fact that they expect you to endure relationship-building scenes between these obnoxious cardboard cutouts in each and every town to experience the game's 80+ endings... lordy lordy.  Just... No.
The game's skill system looked to be interesting, at least until I dug deeper into how it works. It's quite a vast one for a Japanese RPG, with everything from cooking to biology to sketching to whistling (yes, there's a whistling skill). That said, most of these are simply glorified stat boosts and have no practical purpose outside of this - Mineralogy boosts intelligence, Biology boosts maximum HP, et cetera. A few more traditional RPG ones sneak in too - Cooking allows you to craft a wide variety of healing items from ingredients, Herbal Medicine boosts the effects of healing items, and Pickpocketing appropriately lets you steal items from random NPCs (though more often than not, you get useless crap like crumpled paper or even "Bad Checks" that constantly drain your money until you get rid of them). Other skills lend themselves to in-game mechanics - Whistling contributes to a skill called "Familiar", which grants the player a chance to call a bird to buy and sell items from at any time, even in the midst of a dungeon - a cool idea, but again, you only have a chance to successfully do so based on how many points you've sunk into Familiar and the skills required to learn it, so you have to grind out level upon level just for a chance at making that point investment work in your favor (levels which you can almost certainly put to much more effective use elsewhere). It's like they wanted to make a complex western-style RPG but got cold feet halfway through, so only a fraction of the skills and mechanics they describe actually end up doing anything interesting or useful.

That also perfectly sums up every Tri-Ace game I've played - a handful of interesting ideas haphazardly bashed together and topped with hacky writing and general irritation to create a dysfunctional mishmash that's absolutely no fun to play, let alone sit through to the end.  Star Ocean 2 could have been something marvelous and unlike anything before seen on a console - a super deep Fallout or Ultima-style RPG made by a Japanese team, deemphasizing constant combat in favor of a more realistic, thoughtful and immersive experience in a deeply detailed game world - but what we got was just terribly executed, with boring, clunky combat, "skills" that mostly boil down to tedious grinding and random chance* and dialog, acting and characterizations on level with a Saturday morning cartoon your parents don't remember hating as kids. Between this, the even more inane Star Ocean 3, Valkyrie Profile, Radiata "Shitey Suikoden" Stories, and the constant irritating tweeness and stupid dialog I've seen in their later works, I cannot be convinced that they've made anything of worth since either.  In the end, Star Ocean 2 suffers the same fate as countless other ambitious but vastly underdeveloped games - being discarded the instant something better comes along. And with the likes of Dragon Quest VIII and XI, Grandia, Ni no Kuni, Dark Cloud 2, Elder Scrolls, Yakuza, Baldur's Gate 2, Fallout, Final Fantasy VII Remake, NieR, Torchlight, Ys, Divinity Original Sin II, Breath of the Wild and Path of Exile providing far superior action, character building and crafting elements, you can be sure I and pretty much all other RPG players already have.

* Oh, and it freezes randomly after you complete battles, too, so whether you'll actually get to keep the results of any random rolls is by no means guaranteed. Have fun! 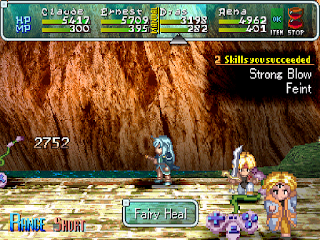 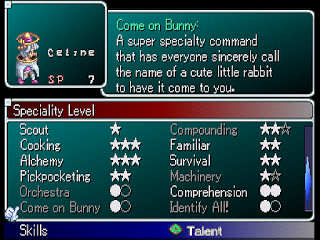 Developer: Tri-Ace, TOSE
Publisher: Enix, SCEA, SCEE
Platform: Playstation, PSP, PS3, PS4, Vita
Released: 1999, 2009, 2015
Recommended Version: I have only played the PS1 version but the PSP version seems to be something of an enhanced port with updated visuals at the least. It's also the only version other than the PS1 that was given an English release.
😞
Labels: ⭐, 🐅, 1999, Full Reviews
Newer Post Older Post Home