Lufia II: Rise of the Sinistrals

The original Lufia was far from the SNES's most highly-regarded RPG, but apparently did well enough in the US to warrant its sequel being localized as well.  But does Lufia II manage to be an improvement, or does it simply slink into obscurity alongside its predecessor? 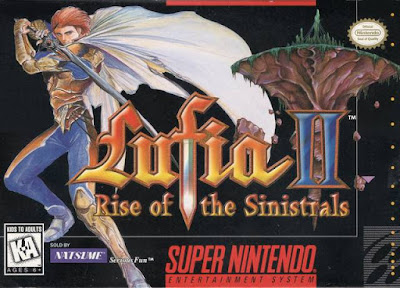 Lufia may not be the most well-known name in the RPG world, but it's a fairly prevalent one, lasting nearly two decades and spanning four different platforms before its developer closed their doors in 2013.  The first game in the series was one I played briefly many years ago, but didn't find much of note about (save that, like Final Fantasy 1, your attacks would not automatically target new enemies after you killed a foe, which was rather irritating).  It was a long time before I finally decided to give the series another shot, but I'm certainly glad I did, as Lufia II is a massive improvement over its largely-mundane predecessor.

One thing that becomes clear right away is that Lufia II works in a lot more of a puzzle element.  In fact, like Zelda, they're the main focus of every dungeon with combat taking a backseat in comparison.  There is a surprising amount of variety, too - weighing down switches, matching up blocks, finding hidden passages with treasures, and collecting various tools to skip over gaps, blast through walls or hit switches from afar are all prominent elements.  While there are still turn-based enemy battles, they are visible on the map while in dungeons (though still random on the overworld), will only move when the player does (allowing them to be moved into position for certain puzzles), and the player is even afforded the opportunity to stun them with arrows and slip by them without a fight if they wish.  One can also use the Reset spell to refresh all enemies in a room to grind if they wish, but this is rarely necessary.

Combat is changed up in numerous ways too.  One can no longer target dead enemies as in the previous game, as turns operate on an individual basis - as soon as you're prompted and select an action, you'll carry it out.  Spells are no longer specific to certain characters, but can be purchased in any shop and used by any character (though naturally, characters with stats geared toward casting will get more mileage from them).  A secondary mechanic appears in the form of "IP", which builds up as a character takes damage from enemies.  This can be used in conjunction with certain weapons, armor or items to cast spell-like effects - everything from buffing the party to weakening enemies to healing to doing elemental damage are represented with these, effectively making them another form of spellcasting.  The catch is that items that can cast don't always have the best stats, though, so it's up to the player to find a balance between an item with a useful IP ability and one with better stats to get the most out of all of their characters.  Pacing is also much improved over the original game, with every animation being quick and snappy (a vastly underappreciated thing in a genre where you'll be seeing them all thousands of times per playthrough).  The L button also functions as a one-button auto battle as long as you hold it down, which greatly speeds up mundane encounters with weaker foes.

An odd, but welcome new mechanic comes in the form of the "Capsule Monsters".  Basically, throughout the journey you'll recruit a small handful of monsters, each of a differing element - these basically serve computer-controlled ally characters, though you can only have one of them active at a time.  While they also do not require equipment or items, they will often ask for a specific item to feed to them (usually a weapon or piece of armor, which may not always be available at the time), and doing this enough times will cause them to evolve to a new form, gaining higher stats and new skills.  Each can upgrade up to four times, getting more powerful in the process.  While obviously nowhere near as in-depth as something like Pokemon, the influence is certainly there, and seeing as Lufia II predated the western release of Pokemon, it was pretty fresh to most western gamers at the time too.

Lufia II was also an ambitious game in terms of side-content, providing more than most RPGs of the time and seemingly providing some inspiration to later games like Final Fantasy VII and Super Mario RPG.  There are several minigames the player can take part in, with winnings being tradable for prizes - these include poker, slots, blackjack and bingo, which are all pretty fun but not particularly noteworthy in themselves.  The most prominent one is a massive, randomly-generated 99-floor dungeon known as the Ancient Cave, which is practically another game in and of itself.  Entering it resets the party's levels and strips them of most equipment, challenging them to reach the bottom by collecting and using whatever items they find along the way.  As they go, they will find red chests (containing items only usable within the dungeon and taken away when they leave) and blue chests (which can be used outside the dungeon and even carried over across sessions there).  Pretty crazy stuff for a SNES RPG, and definitely impressive in an era where heavily-randomized game content simply didn't exist much at all on consoles.

Of course, like any other RPG of the time, Lufia II wasn't a flawless experience.  The game's translation is pretty good for the most part, though there are some awkward bits of phrasing in places and some questionable choices for spell names (the spell called "Poison" actually cures poison, not inflicts it).  Some other bugs creep in, too - save data can be corrupted on the options screen by scrolling past the "Monaural" sound option to a nonexistent third option, and it's possible to softlock or even outright crash the game in a few places (one example being using the item called "Statue").  Most of these are relatively minor and save points are never far off, thankfully, but it is still a bit annoying to run into one when you play.

Even with some prominent mistakes and translation hiccups, though, Lufia II manages to stand out with its creative design elements, melding Zelda-esque puzzles with traditional turn based RPG action and even some surprisingly inspired elements.  The focus on minigames before games like Final Fantasy VII cornered the market on them was pretty fresh for the time, and elements like a randomly generated dungeon and a shop where you can buy back any item you've ever sold are things I wish more modern RPGs would add.  It may not be the most highly acclaimed RPG on the system, but it's one that's still worth a look if you can find a copy. 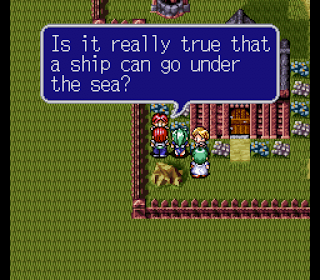 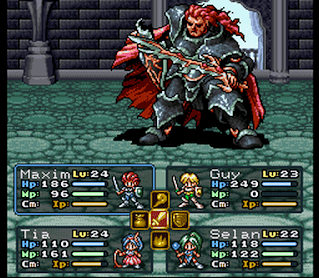