Wild Arms 4 represented a major shift away from almost every norm of the franchise, and as a result is widely regarded as the black sheep of the series.  But is there still a good game to be found if you put the franchise's legacy aside and judge it on its own merits, or should it just be remembered as the beginning of the series' decline? 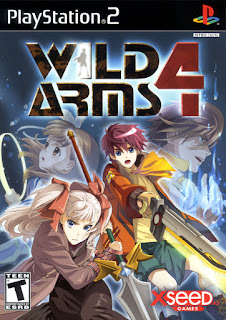 A franchise changing up its familiar format is always a risky move to take - the risk of alienating one's existing fans, paired with no guarantee the change will bring about new ones, has been a killing blow to more than a few beloved series.  But staying constant carries similar risks, with more than a few franchises being abandoned in favor of the new hot property on the market once the next big thing rolls in, so taking risks becomes a part of the territory even if it may ultimately doom a series.

Wild Arms 4 was Media.Vision's attempt to update Wild Arms for a new generation, and they really went all-in with the change, creating something that plays very unlike any prior game in the series.  In fact, it actually feels a bit like a puzzle-platformer rather than a straight RPG, at least outside of combat.  Movement is in three dimensions in some areas and two in others (helpfully pointed out to you with text reading "side view" in the corner of the screen).  You control only one character outside of battle (Jude), and he has some rather Mario 64-esque movement mechanics, utilizing a double-jump, slide and a stomp to get past obstacles.  Thankfully, despite the dynamic camera and perspective, the game does make navigation rather simple - a red arrow indicates the area you've just exited from, while blue arrows indicate areas you've already been and yellow ones point out areas you haven't visited yet, so it's easy too find your way around the dungeons.

Tools, formerly a mechanic that defined and distinguished the party, are no longer such. They are also not a permanent part of your repertoire - you find and use them in the same dungeon (and often in the same room), making that element feel more akin to something like Adventures of Lolo than Zelda.  There are at least quite a bit of variety to them - swords can break some objects, sword hilts can be thrown to activate switches, shields can block damage from fire and laser traps, and so forth, so while it doesn't work on the same principle as the previous Wild Arms games, it does at least keep the puzzle-oriented design to its dungeons.

Combat is another stark departure from the Wild Arms norm.  The game still utilizes a turn-based format, but battles are now based in large part around the "Hex Grid".  Players and enemies alike all move between seven spaces on the field, and attacks, items and spells target the hexes themselves - not the specific characters within them.  Moreover, multiple characters can be within a hex at the same time, though enemies and player characters cannot share a hex.  This effectively means that attacking a hex with two or more characters within it will do damage to all of them (barring a miss), and that most items and status effects are cast on the hex itself - not the characters.  Essentially, if one casts a Poison spell on a hex, the characters within it will take damage at the start of each turn, but they can also move out of that hex to get away from the effect.  Inversely, if a player uses a healing item, it will heal everyone in the hex, so grouping up the party momentarily would be beneficial in that case.  Controlling the field quickly becomes key to victory, especially as the game goes on and enemies become more aggressive, pushing your party into a single hex so they can attack them all at the same time. Hexes can also somewhat randomly be assigned as "ley points", granting bonus damage if the player uses a skill or spell that matches their element.  Inversely, casting from or into a ley point of the opposite element will reduce the effect.  Strangely, the game is also very forthcoming with enemy stats - you can view any enemy's stats at any time during a fight, even bosses.

Wild Arms 4 still utilizes random encounters, and unlike 2 or 3, there isn't a readily-available way to avoid them.  However, once a particular dungeon's boss is defeated, the player is often afforded the ability to disable them completely for that dungeon, letting them explore and find any treasures they may have missed on the way in.  Not quite as convenient to the player, but practical in its own way.

The game also retains the franchise's high standards for presentation, with some quality graphics and sound design in almost every area of the game.  It's definitely a departure in style and tone from the "old west" aesthetic of the earlier games, going for more of a futuristic science fiction bent, but nothing about it is inherently bad; just different.  Town music in particular has a very ambient, laid-back tone to it; I found myself thinking of games like Simcity as I listened.  The game's story scenes are significantly upgraded, giving the game a much more anime-like presentation - lots of cutscenes with choreographed animation, dynamic camerawork and professional voice-acting (which was still a relatively new thing for games of the time).  Even the introductory cinematic (seen when you load a save) has its lyrics dubbed into English, which was fairly unusual for a video game of the era.

Fitting with that, though, the game's story does fall into a lot of particularly cheesy anime tropes.  The characters are all rather stock and archetypal, and the dialog has a pervasive tone of "adults are all too cynical to save the world, the kids are the real heroes" that gets a bit grating.  The designs are more than a bit silly at times too, with multiple belts and chains and oversized accessories.  Still, I found myself getting wrapped up in the story, and it does at least retain a sense of humor about itself at times, so its more annoying elements are only a minor issue.

Wild Arms 4 is definitely the odd duck of the series, and it isn't hard to see why - it changed up its aesthetic and almost every familiar element of its gameplay in some rather strange ways, largely exhuming a "classic RPG" feel in favor of something more akin to an action game with an anime aesthetic.  However, I found it to be a competent and entertaining title in its own right; maybe not as fresh and captivating as its primary competitors of the time (Final Fantasy XII and Persona 3), but one that's certainly worth a look if you're a fan of the franchise.  It's not without its faults for sure - an uneven difficulty level and some irritating writing tropes hamper it a bit - but it's an interesting and mostly successful reinvention of the franchise. 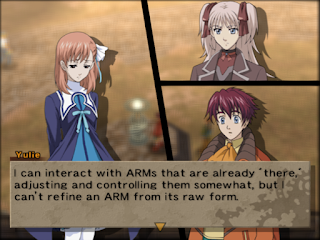 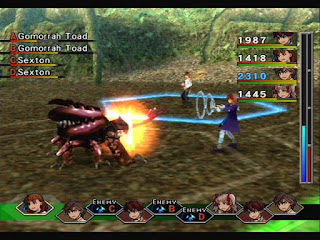