Worlds of Ultima: The Savage Empire

The first in the short-lived Worlds of Ultima spinoff franchise, which saw little fanfare upon its release.  But is there some merit to this overlooked title, or is it a weak link in the Ultima chain? 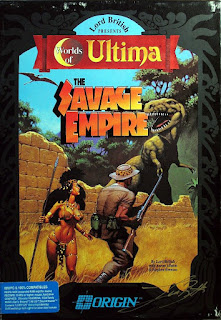 Origin Systems had already made a splash with a number of high-profile CRPGs in the '80s, providing players with enormous, sprawling worlds to explore and a surprising density of NPCs and quests within them.  By 1990 technology had begun a rapid evolution, and Origin sought to keep up with Ultima 6, a game which would feature an entirely revamped engine that sought to not only immerse the player in a virtual world and an epic journey, but to give it a simulation-esque feel as well - cows could be milked, objects could be dropped, thrown and equipped to numerous inventory slots, equipment could be scavenged from defeated enemies, and food could be hunted and fished for, among numerous other innovations.

While Ultima 6 largely succeeded in that regard, it's no surprise that its engine was very time-consuming and costly for Origin to develop.  For that reason, they announced a spinoff franchise, Worlds of Ultima, that would allow them to get more mileage from the engine and allow other writers to tell unique stories in worlds based on Ultima lore, but ultimately separate from the main running storyline of Britannia.  However, only two Worlds of Ultima games were released; lack of fan interest and low sales quickly led to the series' cancellation (and a planned third game based on the legend of King Arthur to be scrapped).

The first of these two was Savage Empire, produced by Warren Spector.  The storyline concerns the Avatar and two of his acquaintances (Jimmy Malone and Professor Rafkin) being drawn into a parallel world when an experiment on his Orb of the Moons goes awry.  This world proves to not only be inhabited by dinosaurs, but indigenous tribes from across Earth's history and a species of vicious giant ants named the Myrmidex.  Naturally, the Avatar must reunite with his old companions, solve the mysteries of this strange world and find a way to return home to Earth.

As one might expect from that introduction, Savage Empire is a considerably smaller and shorter game than Ultima 6, with a world a fraction the size and much fewer NPCs to interact with on the whole.  Other aspects of the game, such as the magic system, have also been greatly simplified - one only needs a single totem and a single reagent, and there are only a total of nine spells to cast (and only one character who can cast them).  This does work in the game's favor at times, however - the smaller design of the environment is considerably easier to navigate than Ultima 6's world, and the limited viewpoint the player is afforded (an 11x11 grid) is much less problematic as a result.  This also results in fewer instances of getting lost in mazes of similar-looking scenery, trees and so forth.  However, it is still easy to get boxed in by mountains, cliffs and other terrain due to the limited viewpoint, requiring lengthy searches to find a way around.

True to its more primitive setting, the game also puts more emphasis on scavenging and crafting items - animals can be skinned for a variety of goods, from feathers to furs, and crude weapons can be crafted by collecting a variety of items - one can create a "grenade" by utilizing a crude fuse (cloth dipped in tar), a clay pot and gunpowder (which one must craft with a combination of sulphur and potassium nitrate crystals).  There is also no concept of a "shop" in the game, requiring you to acquire some goods through trading.  This is most prominent among the Nahuatla tribe, who trade emeralds for a variety of goods; emeralds can in turn be acquired by trading parrot feathers.

Despite these elements, though, Savage Empire is very much an Ultima game in design - the player has very few restrictions on where they can roam, and figuring out what they must do to proceed generally involves a lot of dialog with NPCs in order to discern one's current objectives.  One can also easily make the game unwinnable by attacking someone they shouldn't or losing an essential plot item, so discretion (and frequent saving) is heavily advised.

Savage Empire, like Ultima 6 before it, is very emblematic of its period - built on a new engine and clearly eager to show off its features, but also hampered by its somewhat clumsy interface and attempts to be "realistic" at the expense of smooth gameplay.  Still, the game provides enough imagination and charm in its odd setting, story and characters that it proves an enjoyable experience to play in spite of its faults.  Maybe not worth the price of tracking down a boxed copy from some scalper on eBay, but since the game is also available as a free download from GOG (packaged with its sequel, Martian Dreams), it's well worth a look for any fan of classic CRPGs.

Developer: Origin Systems
Publisher: Origin Systems
Platform: PC, SNES
Released: 1990, 1995
Recommended version: The PC version runs in the Ultima 6 engine, and while it's not my favorite of the Ultima engines, it is vastly preferable to the stripped-down one the Super Famicom version of that game (and Savage Empire) run on.  Plus the Super Famicom version is only in Japanese...