Castle of the Winds

A beloved classic title among gamers of the Windows 3.1 era.  But does this dungeon crawler stand the test of time, or is it just too dated and archaic to be any fun these days? 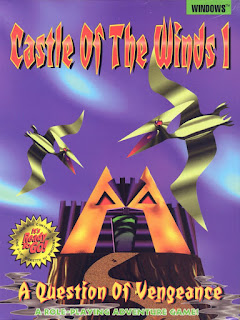 Dungeon crawlers were a very common sight on the various computer platforms available in the 1980's and early '90s; they could get by with relatively simplistic visuals and a minimal storyline (generally relegated to the manual due to limitations of machines and storage media of the time). and their complex layouts and challenge provided a high amount of longevity for the asking price.  Of course, one of the beloved classics in the genre was Rogue, a randomly-generated adventure with simplistic ASCII graphics whose popularity was such that it went on to inspire an entire genre of games ("Roguelikes").

Castle of the Winds shows heavy influences from Rogue in its overall design - the dungeon the player explores in the game is randomly generated, with a sizable number and variety of enemies, items and pieces of equipment (some enchanted, some cursed) to encounter.  The going is also very tough at first, particularly on the higher difficulties - the player gets only the most basic of equipment out of the gate (whatever they can buy on a handful of gold and scavenge from the first floor) and a single spell, and early encounters generally just come down to repeatedly swinging/firing spells at an enemy and hoping he dies first.  Thankfully the game does allow the player to save their game at any time, so one can simply "save-scum" their way to victory in the early stages if luck is simply not on their side.  Of course, as the player's abilities grow and they earn more spells, the overall experience becomes much more fluid and fun - traps that provided a serious obstacle before can now be easily evaded or dispatched, and enemy groups can more easily be dealt with area-of-effect spells or avoided altogether with enemy detection skills.

Of course, being a relatively late comer to the game and built for a mouse-driven operating system also gives the game some advantages. The sprite-based graphics grant it a simplistic, but charming visual style, with each of the various character sprites and traps represented by a small tile drawn in the 16-bit color style emblematic of the era.  The game also takes advantage of Windows' built-in help feature to provide the game's back-story, as well as explain all of the game's mechanics in considerable detail, which is quite handy.  The game's inventory system is also rendered in Windows itself, allowing the player to customize their interface in any way they choose; opening new windows to represent various purses, backpacks and bags they find, and the player can simply drag-and-drop to move items around their inventory.  The player also gets access to ten quick-slots for their spells, which proves to be very useful in combat as they don't have to enter the spell menu each time to select an attack.

The game's storyline is a relatively basic one, beginning as the protagonist seeking revenge for the deaths of his godparents (and later the inhabitants of his hometown) and eventually turning to him discovering his true destiny as the rightful heir of the Castle of the Winds.  However, the well-worded prose in the game's story scenes lends much to the experience, capturing the player's animation and spurring them to press onward in order to complete the game.

In the end, Castle of the Winds, while a relatively basic dungeon crawling experience, is nevertheless a fun and addictive one to play.  The intuitive design of the game, as well as the obvious care and love put into crafting it, help it stand up surprisingly well even today, more than twenty years after its release.  While a bit difficult to get running on modern machines (the game does not run natively in 64-bit versions of Windows), this is still a title well worth checking out, especially since it has been released as freeware by its creator. 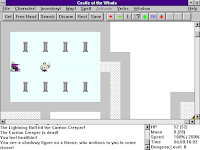 Download the game for free (or play it in your browser) on archive.org
One can also run the game through PCEm, a real or virtual machine running Windows XP or older, or simply by installing Windows 3.1 in a DOSBox setup; do some Google searching for how to pull those off.