Before the term "Japanese RPG" was part of gaming vernacular and hell, even before RPGs on consoles were really much of a thing at all, Sega localized two for the Master System in November of 1988.  One was Phantasy Star and the other was Miracle Warriors: Seal of the Dark Lord, which both boasted detailed sprites and popping colors that really set them apart from their competition on the NES.  Miracle Warriors' gameplay wasn't nearly as refined as its counterpart, though; it's much more of a grind, for one, with enemies dropping a paltry amount of cash and gear being very expensive even at the start of the game, costing thousands of gold pieces.  They attempt to offset this by having monsters also drop Fangs, which can be traded for a bit of money or (later on) for valuable items, but it only helps to a point.  It attempts to copy notes from some other western RPGs like Ultima, though, in that not everything you encounter on the map is evil - sometimes you'll encounter traveling citizens or merchants whom you can Talk to to end the battle without a fight.  You can also slay them (Merchants in particular giving you a ridiculous amount of money when killed), though this will drop your Character Points, which work somewhat like the Karma system in Ultima - if it drops too low you won't be allowed into towns, and then you're basically screwed unless you survive long enough to build it back up.  More annoyingly, your equipment decays in this game, which really sucks - you drop thousands of gold on a shiny new sword, armor or shield, and then you can only use it about 50 or so times before it breaks.  Sure, you can visit a blacksmith in town and shell out gold to have your equipment repaired (or hire a blacksmith to travel with you and repair it for free), but guess what both options cost?  Money!  And guess what that means?  Yep, more grinding!  Add to that the frustration of a lackluster translation, getting only vague hints on your next objective most of the time and the fact that one wrong turn can put you in a dangerous area with enemies far above your current level, and you have a game that's pretty annoying to slog through despite its short length.  Miracle Warriors was one of the very first turn-based JRPGs to be localized, and I can see it being a decent enough experience for its time, but it doesn't hold up particularly well today.  Especially not when compared to Phantasy Star, which is still a very fun and technically impressive experience. 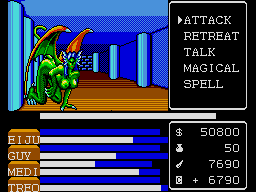